The shortest route from Russian-occupied Crimea to the Polish border still entails a trip of some 655 miles. But there's an even shorter route that Russia could take: stepping across the border that Poland shares with Russia's Kaliningrad enclave within Eastern Europe. The fact that Russia has spent the past few years piling Kaliningrad to the rafters with new military hardware does little to allay Polish concerns. 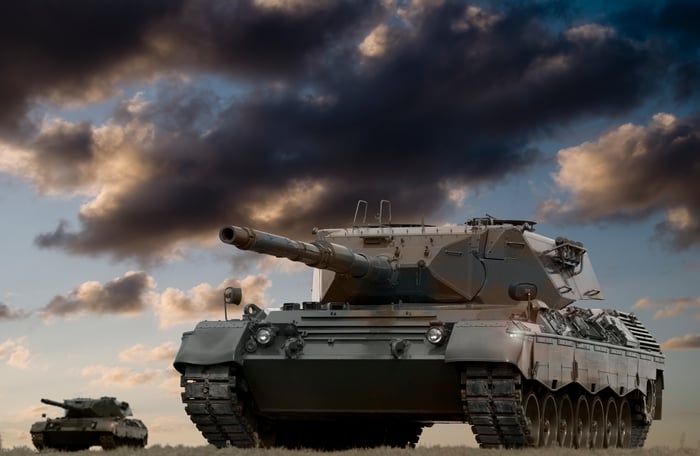 To fend off this threat, late last month, Poland stepped up its efforts to stiffen its defenses. As The Jamestown Foundation's Eurasia Daily Monitor reports, Poland has invited local and foreign military contractors to submit bids to build it a new fleet of main battle tanks for the Polish army. Here's why.

According to the EDM, Poland's army boasts a large number of main battle tanks -- about 830 in all. For context, on paper, this force is twice the number of tanks possessed by neighboring Germany. In reality, however, more than half of Poland's tank force comprises antiquated 1970s-era T-72M1 tanks and Polish-built Twardy T-72 clones. The remainder are somewhat better-quality German Leopard 2A4 and 2A5 main battle tanks.

Poland's aim, then, is to replace its Soviet-era T-72s with more modern tanks from the West. But according to the EDM, "[I]t is not altogether clear what kind of MBT the Polish MoND [Ministry of National Defense] is actually looking for." They just want something better than what they've already got. This appears to offer America's General Dynamics (NYSE:GD) an opportunity to make a sale.

Reportedly, Poland is looking to buy as many as 1,000 new tanks for its army. Using General Dynamics' Abrams main battle tank (which costs $8.5 million new) and Germany's most advanced Leopard 2 A7+ tank (list price: $8.9 million) as reference points, this seems to imply the potential for a sale worth somewhere between $8.5 billion and $8.9 billion -- a tidy sum for General Dynamics, whose combat systems division did $5.6 billion in revenue last year, according to S&P Global Market Intelligence.

But here's the thing: Here in the United States, we may think that General Dynamics goes together with tanks like peanut butter and jelly. But over in Europe, local tank-builders may have significant advantages in competing for the Polish tank contract.

For example, when Poland first started talking about potentially needing some new tanks back in 2014 (not coincidentally, at the same time as Russian tanks were rolling over Ukraine), its initial plan was to build a PL-01 tank locally, with assistance from Britain's BAE Systems -- maker of the Challenger tank and CV90 armored personnel carrier.

This plan has since been abandoned -- likely a wise choice, seeing as BAE announced the closure of its own tank factory in April. But if Poland's first instinct was to partner with BAE, rather than GD, to build new tanks, then that's already one strike against General Dynamics.

Poland's next most likely choice would be to have a German arms maker develop a tank for it. Rheinmetall, for example -- a German maker of armored personnel carriers -- recently won a contract to upgrade Poland's oldest Leopard 2A4 main battle tanks (bought used from Germany). Separately, France and Germany have been urging Poland to join them in developing an entirely new fourth-generation main battle tank. Presumably, the counterparty in that scenario would be Giat Industries S.A., the holding company that in 2015 absorbed both Germany's Krauss-Maffei Wegmann (KMW), which designed the Leopard 2, and Nexter Systems of France, maker of the Leclerc tank.

What it means for General Dynamics

EDM further notes that Poland might consider bids from Turkey's Otokar to sell it Altay tanks, or buy Merkavas from Israel. Clearly, there are a lot of players in this contest. So how should an investor play this?

Honestly, with BAE being out of the tank-building business now, Nexter and KMW absorbed by a privately held company, Merkava built by the Israeli government itself, and Otokar insanely expensive at about 38 times its debt-adjusted P/E... an investor's options are pretty limited. If you are looking to invest in a foreign company, Rheinmetall looks promising at a valuation of just 17.5 times earnings, and it has a good shot at winning a role in the Polish contract, so it might be worth a closer look.

If you prefer to invest closer to home, though, General Dynamics at 19.4 times trailing earnings is a pricier bet, but one with more global options to profit. (For example, the company recently won a large contract to sell armored vehicles to Saudi Arabia, and the profits from that one have yet to flow onto its income statement.) If and when Poland narrows down its short-list of bidders, and General Dynamics makes the cut, then that would make the company just that much more attractive to an investor.