Facebook and Tencent dominate the industry with their various apps.

Social networking apps make it a breeze to share content and keep in touch with friends and family. If you asked people which company dominates that market, most would likely tell you it's Facebook (META 4.10%) -- and they'd be right. 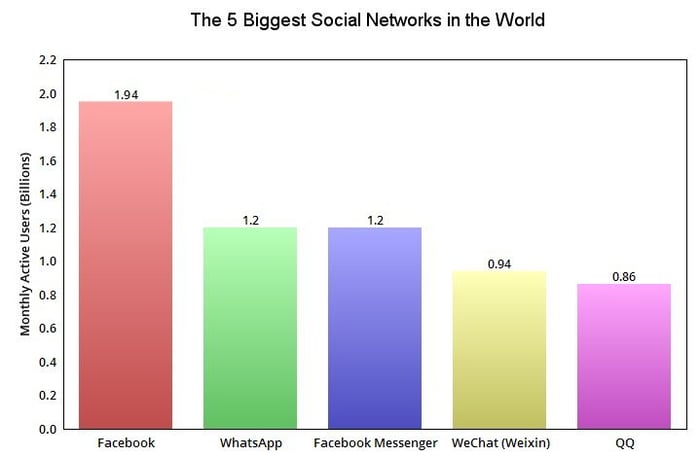 Facebook actually claims the top three spots with its namesake network, stand-alone Messenger app, and WhatsApp, which it acquired in late 2014. Facebook has been expanding Messenger into a "platform" with payments, chatbots, ride-hailing services, and other features. It's also been adding enterprise features to WhatsApp. Facebook also owns Instagram, which doesn't break the top five, but reaches over 700 million MAUs.

Tencent's (TCEHY 2.43%) WeChat (known as "Weixin" in China) is China's top messaging app. Like Facebook, Tencent is also expanding WeChat's reach with a platform of various services. QQ is its older PC-based messaging app, which is still widely used across social games, e-commerce, and other sites.

Facebook and Tencent should keep growing as their ecosystems continue locking in users. Meanwhile, other competitors -- like Twitter and Snap -- could remain tiny players in a market dominated by these two titans.