The industry could approach a combined 100 million units in 2021.

Both Apple (AAPL 2.44%) and Facebook (META -1.19%) are betting big on augmented reality (AR) and virtual reality (VR). The Mac maker believes that in order to bring AR to the mainstream, it needs to be integrated directly into a mobile device's operating system, potentially undermining Facebook's current efforts to build an AR platform into its core app. However, both companies are reportedly working on AR headsets, which would create a new playing field for competition.

Researcher IDC has some good news for Apple and Facebook: The market is expected to soar in the years ahead. 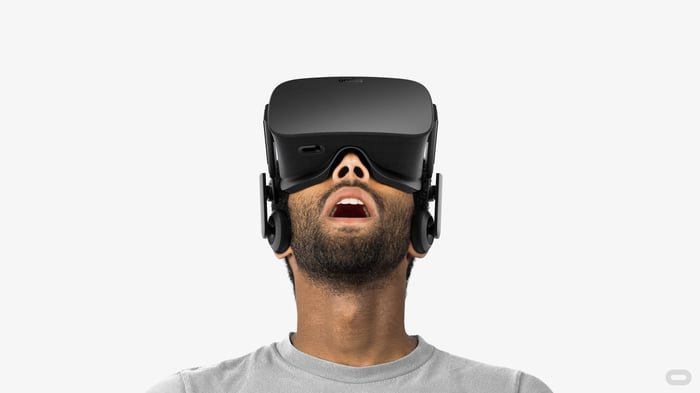 VR will lead the way initially, but AR may have more opportunity long term

There are a couple of other notable observations in the estimates. Currently, AR is more concentrated in the commercial and enterprise markets, while the exact opposite is true of VR, where gaming is one of the most popular applications. Alphabet's (GOOG -3.29%) (GOOGL -2.75%) Google Glass was once the poster child for AR, and while the search giant discontinued consumer sales of Glass a while back, Glass is still used in commercial settings like manufacturing. That's a perfect use case, since an AR headset can deliver information to workers while leaving their hands free.

IDC notes that on the VR front, smartphone-connected headsets are the most popular, since they are also the cheapest and therefore the most approachable way for users to try out the technology; you just buy a VR accessory instead of having to invest in high-end hardware. Tethered headsets and high-end stand-alone headsets are expected to hit the market within the next year or two, which could help spur the market further.

AR will "sit slightly in the background of VR," according to IDC, partially because it is more difficult to deliver a compelling AR experience. VR headsets are expected to drive the overall market's volume. Longer-term, IDC still believes that AR is "the larger of the two plays here when looking at AR and VR combined."

It seems unlikely that Apple will venture too deeply into VR. In fact, investors knew almost nothing about Apple's VR plans until recently. The new updated iMac was designed to support third-party VR headsets; that represents Apple's first foray into VR. Considering Apple CEO Tim Cook's excitement over AR, it seems that the company will focus its own products on AR, so it's probably just a matter of time before Apple unveils its own AR headset. It seems doubtful that Apple will release its own VR headset anytime soon (if ever).

Facebook continues to push forward with VR via its Oculus subsidiary, but CEO Mark Zuckerberg clearly has plans for an AR headset, too, which has the potential of freeing Facebook from the confines of other platforms if it can build its own. If the market does end up putting up growth anywhere near IDC's estimates, there will be plenty to go around.