Delphi is just what Intel needed.

Intel (INTC -4.62%) gave its self-driving-car ambitions a big boost earlier this year, when it announced that it will spend $15.3 billion to acquire Mobileye (MBLY). The Israeli tech company will bring Intel up to speed in the self-driving-car space, thanks to its expertise in vision-based advanced driver assistance systems (ADAS) that form the basis of functions such as autonomous cruise control, collision warnings, and lane departure warnings.

At first glance, it looks as if Intel has made a smart move by going for Mobileye, as it's already working  with 25 automakers on installing its ADAS systems. However, the chip giant will be paying a heavy premium for Mobileye in a bid to gain a better foothold in the vehicle systems, data, and services market that could be worth $70 billion in 2030. 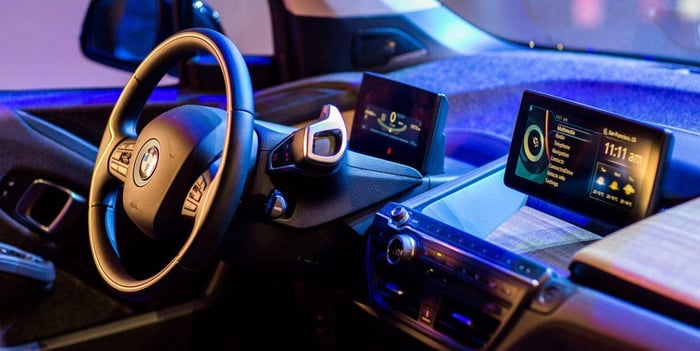 And Intel's earlier acquisitions of McAfee and Altera haven't done much to raise the chipmaker's financial fortunes, so investors have every right to be skeptical. But investors shouldn't overlook another partnership Intel has going.

In mid-May, the engineering alliance of BMW, Intel, and Mobileye brought Delphi Automotive (DLPH) on board to boost their self-driving-car development. Delphi's role is to act as an integrator of the technology developed by the alliance, not just into BMW cars but also into other vehicles.

This provides a strong springboard for Intel to advance its driverless-car technology, since Delphi is known for its expertise in the system integration of automotive electronics and safety systems. Delphi could also provide its software and hardware components to customize the self-driving-car solution the alliance is developing.

Delphi's work with the partnership is great news for Intel investors, since both companies have already given a fine demonstration of their joint technology development. Early in May, Delphi integrated Intel's self-driving technology into an Audi SUV, which then drove successfully through heavy Silicon Valley traffic.

The Audi self-driving test car had 26 sensors that generated a huge amount of data, which was then used in quick decision-making, giving a good example of Delphi's systems integration ability.

Delphi is the missing link that Intel needed to make its automotive engineering alliance work. The good part is that all the companies involved in this partnership have worked with one another earlier. For instance, Delphi has already provided a prototype self-driving computing platform to BMW. So it becomes all the easier for it to integrate Intel and Mobileye's technology into BMW cars and help the team achieve its target of bringing an automotive driving platform to the mass market by 2021.

In fact, the four companies are on track to begin testing 40 pilot cars in the second half of the year. This should accelerate the technology development, as the companies will get access to more data, while the cars should ideally teach themselves to drive better.

Intel has already lined up that piece of its autonomous-car project needs by acquiring deep-learning start-up Nervana Systems last August, after which it bought vision-chip set provider Movidius. Meanwhile, the chip giant's late 2015 acquisition of Altera has given it access to field programmable gate arrays to process light detection and ranging data that's critical to self-driving technology.

Delphi's capability of stringing together these various technology pieces is going to play a crucial role in helping Intel make a mark in self-driving cars, though it might take some time to get up to speed with rival NVIDIA.