If its stock price were based solely on its quarterly results, Qualcomm (NASDAQ:QCOM) shares would be flying high this year. Alas, there's a great deal more to this chipmaker's story than its financials, which is why the bears are ruling the day.

Unlike those of many of its semiconductor industry peers, Qualcomm's shares are down significantly in 2017 -- nearly 12% so far -- and considering the potentially concerning developments still unfolding, that bearish sentiment isn't over. Investors who follow the tech industry have likely heard at least some of the legal news coming from the Qualcomm camp. 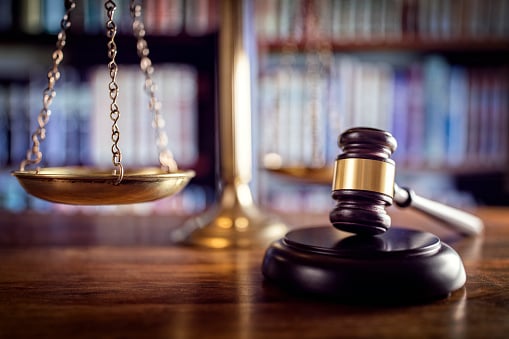 The bears have the floor

The negativity surrounding the company begins and ends with its multiple legal conflicts. The latest series of lawsuits -- Qualcomm has been down this path before -- started last year with charges from a South Korea regulatory body that the licensing fees it imposes for its industry-standard mobile patents were anti-competitive.

Though the matter is still pending, South Korea levied its largest fine ever, a whopping $854 million which Qualcomm has vowed to fight. Not to be outdone, the U.S. Federal Trade Commission (FTC) jumped aboard the legal train, filing its own complaint against Qualcomm alleging the same misuse of its dominant mobile chip and modem position as South Korea claims.

As if its battles with large governmental agencies weren't enough justification for Qualcomm bears, longtime customer Apple (NASDAQ:AAPL) joined the party by filing its own $1 billion lawsuit. Apple claims that, as retribution for it helping South Korea's investigation, Qualcomm withheld $1 billion in rebates it was owed.

The legal back-and-forth between Qualcomm and Apple took another ill turn for the chipmaker recently, with new claims that the licensing agreements the iPhone maker has been subjected to are invalid. Bottom line, Apple hopes for a ruling that would allow it to buy Qualcomm's chips and forego the licensing payments altogether.

Apple has gone so far as to withhold royalty payments to its suppliers, which those companies would normally pay in turn to Qualcomm. That move led Qualcomm to revise its revenue guidance for the current quarter downward by $500 million, to a range of $4.8 billion to $5.6 billion from the prior forecast of $5.3 billion to $6.1 billion.

Excluding one-time items, Qualcomm reported a solid  8% jump in revenue last quarter of $6 billion. The revenue breakdown and subsequent earnings before taxes, speaks volumes about how critical Qualcomm's licensing revenue is to its bottom line.

Of its $6 billion in quarterly sales, $3.68 billion was derived from Qualcomm's CMDA (Code Division Multiple Access) technologies unit or QCT. The balance of $2.25 billion was generated by Qualcomm technology licensing, QTL for short.

This is where the bear case for Qualcomm really hits home. Though QTL accounted for just 38% of total sales, it was responsible for a whopping 87% of earnings before taxes. Not surprisingly, anything that even remotely impacts Qualcomm's QTL results in a negative manner is cause for concern, which bearish investors are quick to point out.

Another possible bearish sign is that Qualcomm's planned $38 billion acquisition of NXP Semiconductors (NASDAQ:NXPI), after multiple extensions to acquire the needed shareholder votes, is being called into question. Qualcomm is already exploring the Internet of Things (IoT) market, but the NXP deal would give it a significant boost.

Qualcomm is no stranger to regulatory and legal woes, having paid China a whopping $975 million fine and lowered its licensing fees to settle similar allegations it's facing now. Since then, the Chinese market has become one of Qualcomm's key growth drivers, so don't be too surprised if the current legal issues turn out to be, in retrospect, short-term blips for the company. But for now, the bears have the floor.