If GoPro's new product lineup for 2017 doesn't impress customers, the company could be in real trouble.

It's hard to overstate how important the next three months are for GoPro Inc (GPRO -11.92%) and its shareholders. The company has been through a rough couple of years after products flopped in 2015 and the launch (that wasn't) of the Karma drone in 2016 resulted in a recall of the highly anticipated product. And if it follows the same product cycle as a year ago, we'll see new products within the next three months.

In 2017, GoPro is implementing major cost cuts in an effort to return to breakeven, and was even forced to sell $175 million of convertible bonds after cash levels dropped to $75 million at the end of the first quarter. If GoPro is going to recover, here's a look at the hill it has to climb -- and quickly. 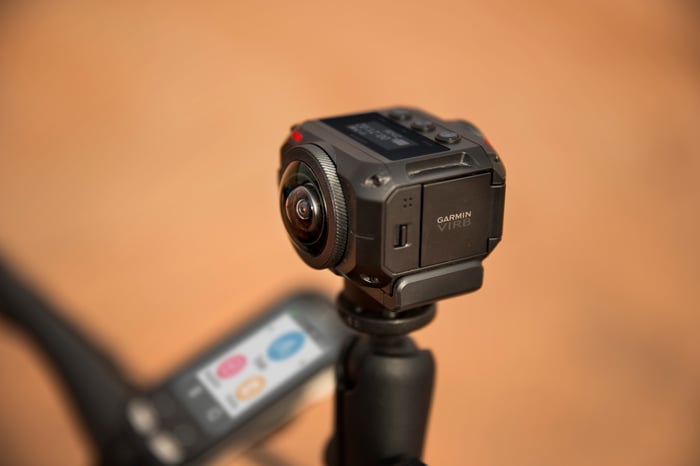 Garmin's VIRB 360 could be a big competitor for GoPro. Image source: Garmin.

Hero 6 and Fusion need to be home runs

We know that GoPro is going to upgrade the Hero 5 camera for this holiday season, but we don't know what that update will look like. Last year brought voice commands, image stabilization, and an improved form factor. This year's update needs to build on that. I would expect slight improvements to voice and image quality, but the real gains may be in offloading images.

GoPro has made an effort to improve the process of offloading photos and editing them for sharing. GoPro Plus allows Hero 5 owners to automatically offload content into the cloud, where it can then be accessed by the Quik app. But the entire process needs to be easier, potentially including live-streaming and/or single-button sharing for social media. If GoPro can take a big step forward in offloading, editing, and sharing, it'll be a big win.

Fusion is the other product that needs to be a big hit. This is the 360 camera GoPro has in beta testing right now and could be the most important product for its future. We don't know enough about the camera or its software to know if it'll be a winner, but Garmin (GRMN -1.40%), Samsung, and Kodak have already introduced 360 cameras, so GoPro could be playing from behind.

Karma was supposed to be GoPro's big new product of 2016, giving the company a foot in the drone market. And if it could capture a significant market share from industry leader DJI, it would be a big win in a natural product extension.

But when Karma was launched it had to be recalled almost immediately, and DJI has now introduced the Mavic and Spark, which are both better than the Karma (and in the case of the Spark, much less expensive). Karma needs to be upgraded in 2017 or GoPro will fall even further behind.

One challenge GoPro may face is that it spent months of engineering time to fix the faulty battery latch that led to the recall. If those resources were diverted from an upgrade to Karma, it could lead to a delay -- and that could spell doom for GoPro's drone business long term.

What about the cloud?

The final thing GoPro should do is make the cloud into a strength rather than an add-on product. Many companies give cloud storage away for their customers. GoPro needs to make the cloud a benefit and something it can leverage to make its products better. Free, easy offloading to the cloud could be a big selling point for GoPro cameras.