Please ensure Javascript is enabled for purposes of website accessibility
Log In Help Join The Motley Fool
Free Article Join Over 1 Million Premium Members And Get More In-Depth Stock Guidance and Research
By Maxx Chatsko - Jun 21, 2017 at 11:15AM

Investors and Wall Street analysts are swooning over the company's novel approach to fuels and chemicals manufacturing. Scientists are more skeptical -- and for good reason.

Imagine an engineered bacteria that can be fed natural gas and churn out low-cost transportation fuels capable of displacing billions of gallons of gasoline per year. It may sound like science fiction, but it's among the many projects being developed by engineered biology conglomerate Intrexon (PGEN 3.76%).

The company provided an update on the technology platform, which could also be used to create various specialty and commodity chemicals when it released and discussed first-quarter 2017 financial results and again at an industry conference in mid-June. That caused a high level of buzz among investors, who, based on the timeline given by management, think this business could become a source of hundreds of millions of dollars in product revenue and, perhaps, single-handedly lift the company to profitability.

Unfortunately, the natural gas-to-fuels and chemicals platform is unlikely to be commercially or economically viable anytime soon. Here's why. 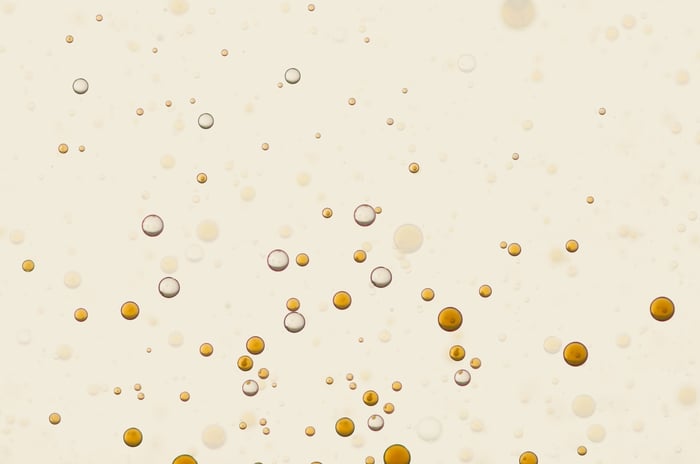 Why it looks great on paper

It's important to understand why Intrexon is undertaking the project in the first place. The grand majority of industrial biotech processes in use and development today use organic carbon sources, such as corn sugar and sugarcane. However, the methane in American natural gas is a cheaper and more efficient carbon source than agricultural sugars on an equivalent energy basis. And since there are microbes that naturally utilize methane as an energy source, it makes sense that curious scientists have entertained the possibilities of developing chemical manufacturing routes relying on these tiny organisms.

The engineered biology conglomerate is developing four different chemicals at its pilot facility in South San Francisco (which happens to be in the same building as TerraVia's former pilot facility):

The four molecules above have a combined addressable market opportunity of $100 billion. The pitch for the technology platform has many parallels to the stories told to investors from more traditional industrial biotech companies. Namely: Here's our novel technology, here are the chemicals we can make, they have large market opportunities, and we're going to scale up to commercial levels of production on an ambitious timeline. Hopefully, Intrexon avoids the same result that pitch has resulted in for the rest of the sector, which is a failure.

It's tempting to think that this time really is different. After all, investors were told that yields for 2,3 BDO increased 30% in the first quarter of 2017 alone. And Intrexon is much better funded than any other industrial biotech company that has come before. However, investors should be open-minded to major technical and economic obstacles facing the natural gas-to-fuels and chemicals platform.

Why it faces huge obstacles

Put more eloquently, the manufacturing process required for Intrexon's platform is unlikely to reach economical production. While the methane in natural gas is, in fact, a lower-cost source of carbon and denser source of energy than agricultural sugars on paper, methane doesn't dissolve very well in water. That means the bacteria won't be able to access it very efficiently while it's being bubbled and cycled through a reactor.

It's a problem that has stifled the development of gas fermentation platforms for decades. In the early 2000s, energy giant Statoil pioneered a similar manufacturing process that fed methane to bacteria, then harvested the protein-rich biomass for use in animal feed. That technology, now in the hands of Calysta and Cargill, is only now being commercialized. The pair is building a manufacturing facility in Tennessee that will eventually produce 200,000 metric tons per year of protein for animal feed, aquaculture, and pet food markets.

Despite the similarities, that process looks quite different from what Intrexon is developing. It can use dirtier natural gas inputs (lowering costs) and is only concerned with growing biomass (not producing unique chemical products after producing biomass, otherwise known as bacteria). Even then, Calysta and Cargill don't expect the resulting product to be competitive at today's protein prices.

In addition to being simpler, relatively speaking, the technology being commercialized in Tennessee has already been proven at a 10,000 MT per year demonstration facility in Europe, where the process was tested for the better part of a decade. Intrexon thinks it will be able to jump to commercial-scale production from a tiny 500-liter bioreactor operating at pilot scale. Unfortunately, that's not how manufacturing technologies -- or biology -- work.

Although investors give more weight to the potential rewards than to the potential risks, Intrexon has begun to check expectations (that it set previously). Robert Walsh III, senior vice president of the company's energy sector, said this on the first-quarter 2017 conference call:

While we are highly encouraged by this progress, we remain vigilant in anticipating and mitigating risks associated with these programs. These include potential scientific risks and possible scale-up risks which could create delays that push out our timelines and could alter our economic model on these projects.

And in fact, the company has already admitted that it won't have commercial sales of isobutanol fuels by 2018 -- a date it previously championed despite long odds.

Intrexon's ambitious scale-up timeline risks racing over critical process development tasks. Proceeding to commercial-scale operations from pilot operations should give pause to investors. There's no precedent for demonstrating a biomanufacturing process on such an ambitious timeline. In fact, most industrial biotech companies that have taken their time during scale-up have failed to overcome the obstacles of commercial-scale fermentation. While there are large addressable market opportunities for the fuels and chemicals being developed by the company, investors should lower their near- and medium-term expectations for the technology platform.