Jason Hall, Steve Symington, and Brian Feroldi
(TMFVelvetHammer)
Author Bio
Born and raised in the Deep South of Georgia, Jason now calls Southern California home. A Fool since 2006, he began contributing to Fool.com in 2012. Trying to invest better? Like learning about companies with great (or really bad) stories? Jason can usually be found there, cutting through the noise and trying to get to the heart of the story. Follow @TMFVelvetHammer

Since going public in 2013, shares of Veeva Systems Inc (NYSE:VEEV) are up almost 60%. And since their lowest point in April of 2014, they're up a remarkable 216% -- an incredible return in a very short period of time. And the best could be yet to come for Veeva Systems investors, as the company continues to dominate the niche in enterprise software for the pharmaceutical industry.

But what about other companies that have also found a space to dominate, and are positioned to continue growing for years to come? We asked three of our top contributors for their ideas, and they suggested genomic sequencing leader Illumina (NASDAQ:ILMN), social media behemoth Facebook Inc (NASDAQ:FB), and rehab and senior housing upstart CareTrust REIT Inc (NASDAQ:CTRE). 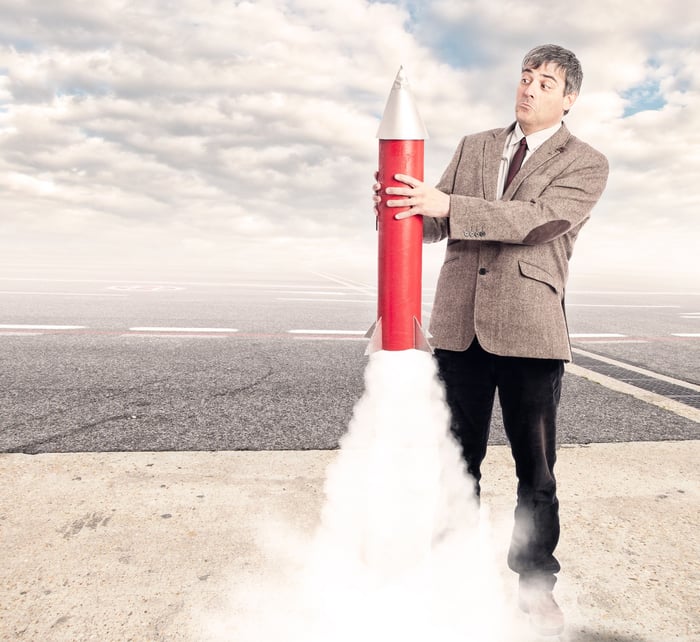 If you're looking for companies that -- like Veeva Systems -- have already delivered big returns for investors, but are set for potentially decades of future growth, keep reading to learn why our contributors picked these three stocks.

Brian Feroldi (Illumina): One big reason why Veeva Systems has been such a stellar performer is that it is intensely focused on dominating a growing market niche. That same formula for success can work in other healthcare segments, too, which is why I think that Illumina is another great company for investors to get to know.

Illumina has long been the recognized leader in genomic sequencing. The company sells a variety of gene-sequencing machines and supplies that make it easy for researchers to decode the genome. What's so exciting about this company is that it could be on the cusp of bringing this technology to the masses. How? The answer lies in Illumina's plans to substantially drop the cost of running a test. Just a few months ago Illumina announced that its new NovaSeq series of machines will one day enable an entire genome to be sequenced for as little as $100. That's a big drop from the current cost of $1,000 per test and promises to be a low enough price point to entice nearly everyone to get their genome sequenced. What's more, Illumina has also invested in a moonshot start-up called Helix that one day plans to launch an "app store" that will enable consumers to gain insights into their genetic code. If it gains traction, then the company could be sitting on a gold mine.

While investors wait for the company's long-term bets to play out, they can rest assured knowing that Illumina is on firm financial footing. The company is already highly profitable and expects to grow revenue at a double-digit rate in 2017. That's encouraging, as the recent launch of the NovaSeq series is expected to create some revenue headwinds as consumers transition away from its older platform.

In total, Illumina offers investors growth now and the potential for even more growth later. If management can deliver, then there is likely to be plenty of upside left in this long-term winner.

It's free (and always will be), but incredibly profitable

Steve Symington (Facebook): It might seem crazy to nominate Facebook (NASDAQ:FB) -- a tech juggernaut with a $440 billion market cap as of this writing -- as a business that could possibly deliver returns that rival those achieved by the much smaller Veeva Systems. But keep in mind Facebook has nearly done just that so far in 2017, with shares up 31% compared to to Veeva's impressive 45% year-to-date return as of this writing. 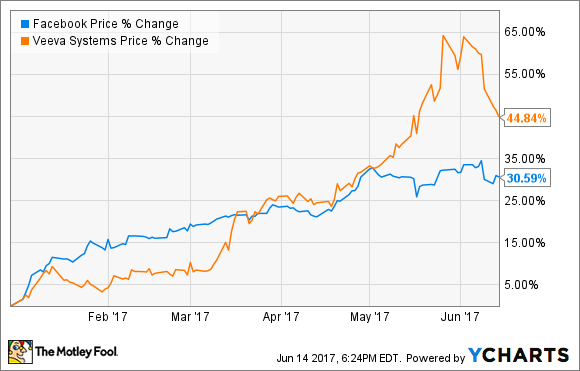 What's more, Facebook is growing at an incredible clip. The social media network's revenue climbed 49% year over year last quarter to $8.032 billion -- greater than Veeva's 32% growth in revenue (to $157.9 million), despite doing so from a significantly larger base -- driven by 51% growth in advertising revenue to $7.86 billion. On the bottom line, Facebook's earnings per share climbed an even better 73% to $1.04, as the company benefits from the increased scale of its monetization efforts.

Of course, it's safe to assume that growth will decelerate going forward -- but not by much. Wall Street anticipates Facebook's revenue this fiscal year will climb more than 39%, while earnings per share are expected to rise by a similar margin.

And keeping in mind that roughly two-thirds of the world still doesn't have access to the internet, Facebook should be poised to enjoy years of healthy growth yet. In the meantime, with Facebook stock trading at a reasonable 25.1 times this year's expected earnings, I think investors today enjoy a wonderful opportunity to buy before that growth is realized.

A real estate niche set for years of growth

Jason Hall (CareTrust REIT Inc): One of the biggest trends that will affect the American economy for years to come is the aging of the baby boomer generation. The most populous generation in the country's history, baby boomers have already started retiring, and that trend is going to continue -- at a rate of about 10,000 per day on average -- for the next 15 years. This shift is going to create by far the biggest population of older Americans in history; according to a Harvard University study, the 65-plus population will increase from 48 million in 2016 to 79 million over the next 20 years.

This is already starting to generate increased demand for senior housing and rehab facilities, and that makes CareTrust a unique and powerful long-term growth opportunity for investors. With tens of millions more older Americans, the need to care for and house them is set to skyrocket, and CareTrust, which owns less than 175 properties at last count, is a relatively small player in this segment today.

But that small size -- and a capable management team -- could be its biggest advantage, since the company is positioned to find meaningful growth from small acquisitions and expansions that the biggest players won't even consider. So far this strategy has worked quite well, with CareTrust almost doubling the number of properties it owns since going public in 2014.

With a huge trend to drive demand and an experienced management team to get it done, CareTrust offers the same Veeva-like potential to expand in a growing niche for many years to come.