Netflix (NASDAQ:NFLX) is one of the most expensive stocks on the market. As of this writing, its price-to-earnings ratio is just above 200, putting it ahead of even high-flyers like Amazon and Expedia.

Like these other internet-based giants, Netflix shares have tons of optimism built into their price. But there's a lot more to the streaming video giant's business than just its past year of earnings. Netflix has been in growth mode over the past few years, with management choosing to redirect essentially all of the company's earnings toward improving content and supercharging its international expansion initiative. In exchange for paltry profits (net income was an insignificant 2% of sales last year), the company has put together an impressive string of accelerating subscriber growth.

The maturing U.S. market saw its expansion pace slow last year after delivering roughly 6 million new users in each of the prior three fiscal years. However, surging gains internationally more than made up for that decline. Overall, Netflix added 19 million new paying members, compared to 17.4 million additions in 2015.

Investors can expect international markets to keep growing in importance to the business. They represent just under 50% of Netflix's membership today, but that ratio has plenty of room to climb over time. 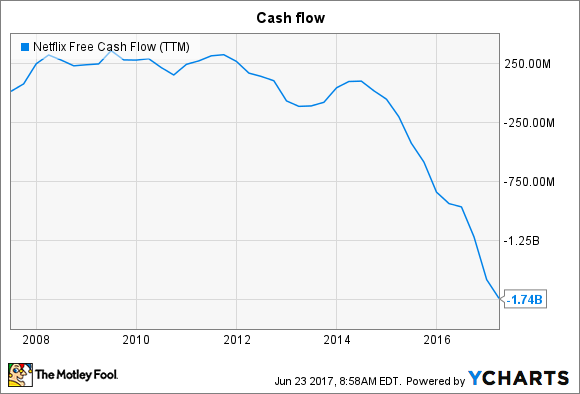 The resource requirements of the business are enormous, and they far outstrip Netflix's ability to generate cash. It burned through $1.66 billion last year, or 80% more cash than in 2015. CEO Reed Hastings and his team believe they'll consume about $2 billion in cash in 2017, too. 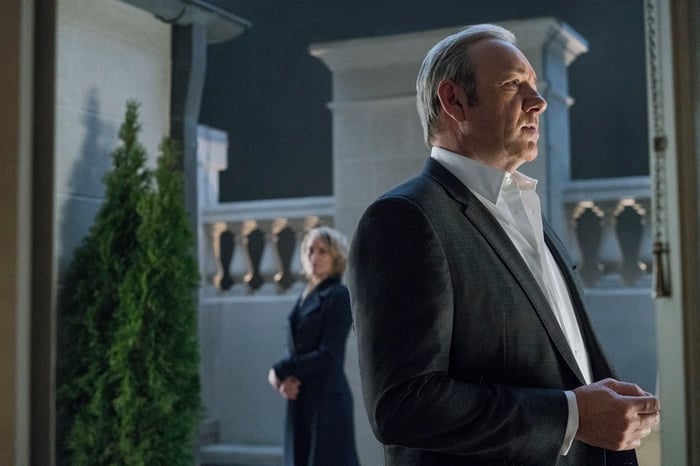 The cash challenge isn't due to any fundamental profitability problem. On the contrary, Netflix's operating margins are expanding at a nice clip thanks to the latest round of price increases. The issue is that original content requires upfront cash payments, and as the company pushes deeper into creating its own shows and movies, that means rising cash needs.

It's clear that exclusive content is a key driver behind Netflix's impressive subscriber growth, so management has good reason to continue the strategy. But that choice ensures a rising debt balance that makes this a riskier stock. 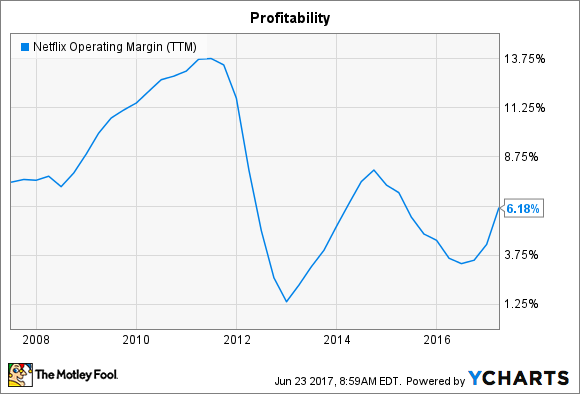 Through its costly international expansion over the past few years, Netflix has been telling investors that it will begin generating significant profits beginning in 2017. Hastings spelled that target out at the beginning of the year, saying the streaming video giant is aiming to roughly double operating margin to 7%. Management plans to "steadily increasing operating profit and margin from there as we balance growth with profitability," he explains in the company's long-term outlook.

It will likely be a few years before Netflix passes on another price hike to its global user base. But average prices should still drift higher as more subscribers opt for pricier high-definition plans or multistream packages. And, management always has the option to scale back on content spending to boost profits -- at the expense of subscriber gains. 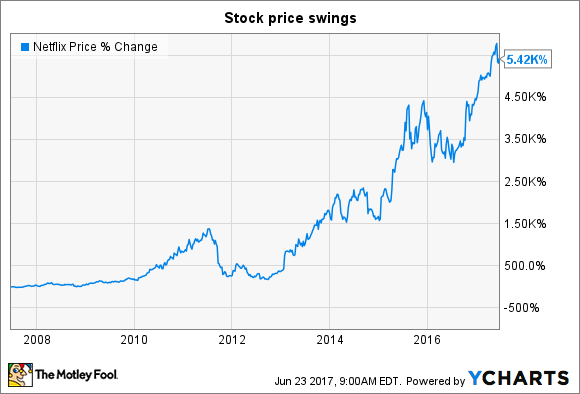 So, where does the stock go from here? Shares have trounced the broader market over the past 1-year, 3-year, 5-year, and 10-year time frames as Wall Street is buying into management's vision that sees a multiyear, global transition to internet TV lifting Netflix's subscriber numbers.

That optimism is founded on positive operating trends, especially revenue and earnings growth. But there's also an unusually wide range of expansion possibilities for this company as it passes 100 million users and aims for 130 million -- or more -- over time.

What isn't clear from the stock price chart is the fact that Netflix investors have had to endure several declines of 40% or more during its epic run since launching the streaming service a decade ago. That volatility will likely remain a feature of this stock, given its huge market opportunity and the many risks associated with its aggressive growth plans.