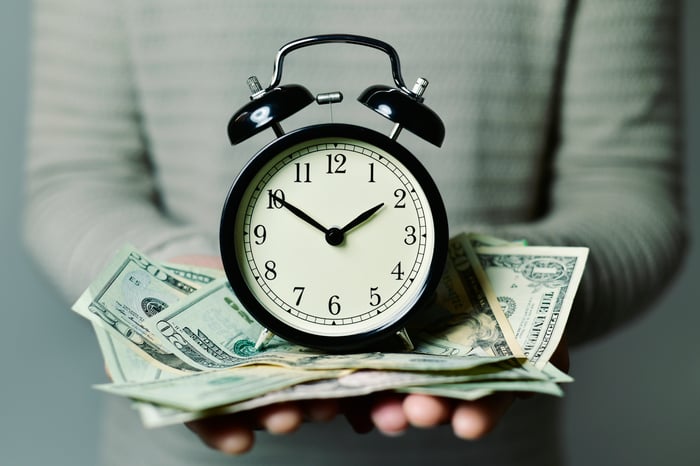 As of March 31, Paulson's fund -- Paulson & Company -- owned a whopping 19.4 million Valeant Pharmaceuticals shares worth about $265 million. He began buying those shares when they were trading around $130, so Paulson has lost a lot of money on this bet so far.

Apparently, he thinks his joining the board can help change that. However, he may not end up having much better luck than Ackman, who was also on the board when he was a shareholder.

That's because Valeant Pharmaceuticals' still faces a lot of obstacles to achieve consistent profitability again, not the least of it being sliding sales for its drugs since the shuttering of its once lucrative relationship with specialty distributor Philidor in 2015.

As a refresher, Valeant Pharmaceuticals took heat for acquiring two heart disease drugs in 2015 only to drastically increase their price. The scrutiny that followed resulted in the ending of its all too cozy relationship with Philidor, Congressional hearings, and eventually, the departure of Valeant Pharmaceuticals' long-term CEO Michael Pearson.

In short, Valeant Pharmaceuticals' acquire-reprice-relaunch strategy drew the ire of insurers and Washington, D.C. policymakers eager to rein in runaway drug prices. The strategy also caused worry that tough talk on prices could eventually result in profit-busting price controls. All of that caused Valeant Pharmaceuticals shares to crash 90%.

Fortunately for investors, the rhetoric coming out of Washington, D.C. may be softening, and if so, draconian price controls could be officially off the table. According to reports, an executive order that President Trump may sign includes drug pricing policies that are more favorable to the industry than expected.

With a high-profile hedge fund manager joining its board, and a friendlier tone in the White House, it's not shocking that Valeant Pharmaceuticals' share price soared this week. 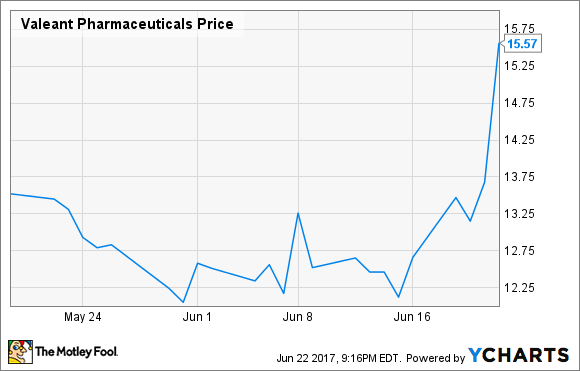 A mountain still to climb

Trump's softened stance and Paulson's savvy will only go so far. For Valeant Pharmaceuticals' to recapture its glory, it's going to need to get its business growing again, and remove the risk of default on its debt once and for all.

Revenue at Bausch & Lomb -- arguably, its most important business -- is stable, but it's only growing by low single digits. Sales at its branded Rx segment fell 9% year over year last quarter, and revenue at the company's generic drug business tumbled 37% from a year ago because of stiffer competition. 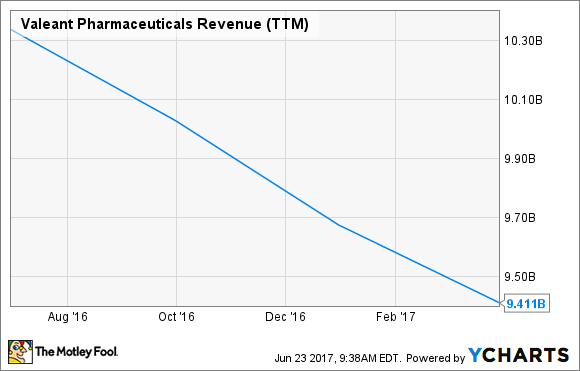 At the same time, Valeant Pharmaceuticals is still being weighed down by a mountain of debt. Yes, total debt has fallen from over $30 billion to around $28 billion, but debt restructuring to push back maturities and lower credit default covenants has the company paying more in interest expense now than it was a year ago.

Valeant Pharmaceuticals needs to keep its interest coverage ratio -- a ratio of EBITDA to interest expense -- above 1.5:1 to avoid the risk of creditors crying default. Currently, this ratio is only 1.83.

To improve this metric, the company's selling assets to cut its debt. However, asset sales reduce EBITDA, and so far, interest expense has increased, not decreased. As a result, it's made no progress toward improving this ratio.

Recently, however, shares have been rallying on hopes this could change. The company expects to close on its sale of the prostate cancer drug Provenge for $820 million soon, and recently, it announced it's getting $930 million from the sale of some of its other products. If using this money to pay off more debt finally moves the interest expense needle lower, its interest coverage ratio may finally stabilize.

That would good news for shareholders, including Paulson, but Valeant Pharmaceuticals' spotty track record in the past suggests caution is still warranted. Sure, Paulson's a smart guy, but he's far from a fresh face to Valeant. And, while President Trump seems friendlier now than during the election, there's no telling what his stance on drug prices will be in the future. Overall, Valeant Pharmaceuticals' will remain a high-risk bet until the interest coverage ratio and sales are growing again.