Like many investors, my early days of finding stocks were in the mold of Warren Buffett -- find companies that are trading at a discount to its intrinsic value. These companies were typically popular brand names, highly profitable, and going through a funk. It's a sound strategy. Following it will likely lead to market-beating returns. However, it's a strategy that eliminated an entire universe of soon-to-be great businesses that are in the early stages of the business lifecycle.

In fact, of the best-performing stocks of the last 10 years, 3 are in the biotechnology industry and 3 are companies that never looked "cheap" by traditional metrics -- Netflix , The Priceline Group, and NetEase .  These winners make it clear,  traditional value investors may be missing out on an opportunity by ignoring well-managed, highly focused, growth companies.

One reason it's easy to shy away from growth stocks like Workday is that it is very difficult to model on a spreadsheet. When companies are growing revenue at a pace close to 40% a year, it's impractical to believe one can predict how long that growth can be sustained or how much it will slow down.

An alternative strategy to gauge the growth potential of a high flyer like Workday is to look at the total addressable market, a term that is used to reference the total revenue potential of a company based on the size of the market it serves. Workday has earned most of its revenue selling human capital management (HCM) software in the cloud. As an early adopter of the cloud, Workday has shown success in obtaining customers who don't want to host software on their own computers and servers. They've also shown the ability to steal customers away from traditional on-premise software giants like Oracle (NYSE:ORCL).

According to IDC estimates, the HCM market is estimated to be about $13 billion globally. By 2021, the HCM space is expected to grow to nearly $20 billion. With trailing twelve months of revenue of $1.6 billion, Workday has captured a meaningful portion of the HCM market but it still has room to grow. According to Workday, as of the end of its fiscal year ending 2016, over 895 customers made the switch from Oracle, SAP (NYSE:SAP), NetSuite, and various payroll providers. In a recent CNBC interview with Jim Cramer, CEO Aneel Bhusri mentioned data from Goldman Sachs that shows it will continue to gain market share at the expense of traditional on-premise software vendors.

Despite the gains in HCM software and Workday's potential in this space, the market alone is not large enough to justify Workday's 12-times-trailing-sales valuation. Even Executive Vice President Chano Fernandez hinted that despite its global potential, the U.S. market may be close to reaching a saturation point:

We are still in early days globally for HCM, the period that U.S. markets are more mature but opportunities outside of the U.S. remained robust.

To justify its valuation and give investors hope that it will grow significantly from today's prices, Workday needs to have success outside of HCM. It is looking to do just that by selling cloud services in the financial management and analytics space.

The company may have hit an inflection point in the first quarter as it obtained Nasdaq (NASDAQ: NDAQ), Adventist HealthCare and Nuffield Health, the largest not-for-profit healthcare provider in the UK, as new customers. It also reported that two large existing HCM customers, 21st Century Fox and CNA Financial Corporation, will include financial management applications. According to IDC data, the HCM market is only half the size of the financials market, so if Workday can continue its strong momentum with financials, the company might blow past current growth expectations. 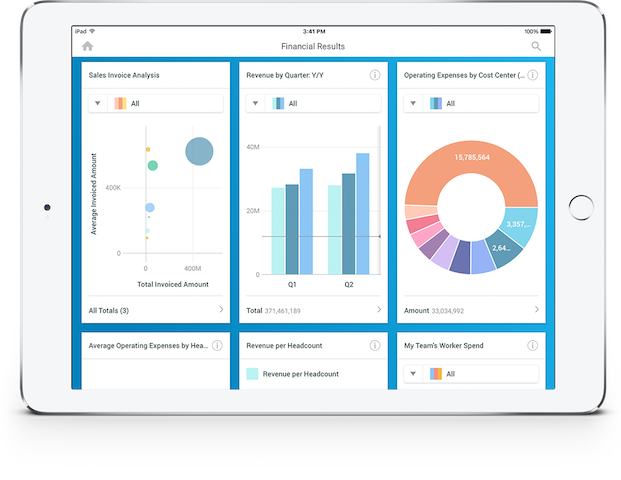 Workday's addressable market could grow from $65 billion as more companies adopt the cloud. However, there is another significant opportunity at Workday that hasn't been talked about much. At Workday's annual user conference, the company announced it will offer a platform as a service (PaaS) as it opens its technology to developers. "The platform we will have is a business-run platform. It's a place where you would be able to extremely productively build sophisticated business applications using the Workday framework," stated technology executive David Clarke.

Giving developers the ability to create applications to maximize the power of Workday is a significant step in opening new markets and creating loyalty. The strategy has been a significant source of business for SAP and Salesforce (NYSE:CRM). Last year, SAP announced a partnership with Apple that allows corporate developers to build iOS apps utilizing SAP's HANA database technology.

Salesforce AppExchange is a place where developers can sell and distribute apps created on the Salesforce platform. It currently houses over 3,000 apps. Just how important is the development platform to Salesforce? Earlier this month, Salesforce announced a $100 million fund to help developers, start-ups, or independent software vendors build and sell apps. Success stories of large applications built on the Salesforce platform include DocuSign and Veeva Systems. The latter is an $8.5 billion cloud software provider to the life sciences industry, which chose to renew its deal with Salesforce until 2025.

It's too early to know if Workday can achieve the level of success as Salesforce and the rivals it aggressively chases. But the opportunity is there and the company has shown it is playing to win. The stock may look pricey now, but if Workday is able to show continued success in HCM, financials, and then expand its market with innovative technologies, today's price may turn out to be a bargain.