The stock market rebounded sharply on Wednesday, making back most of its losses from the previous day's session. The tone was much more positive than it was on Tuesday, as central bank officials in Europe and the U.S. seemed to moderate the comments they had previously made, taking away some of the uncertainty about future monetary policy. Sluggish U.S. economic data was consistent with that overall theme, suggesting that future interest rate increases could come more slowly than they have so far in 2017.

Certain individual stocks enjoyed some good news that sent their shares higher, and Pandora Media (P), Cypress Semiconductor (CY), and Spectranetics (NASDAQ: SPNC) were among the best performers on the day. Below, we'll look more closely at these stocks to tell you why they did so well.

Shares of Pandora Media rose 5% after the streaming-music specialist made some major adjustments to its long-term business strategy. Having announced on Tuesday that founder Tim Westergren would step down from his position as CEO, Pandora followed up with a speech from new interim CEO Naveen Chopra. Chopra said that Pandora will withdraw from the Australia and New Zealand markets, instead focusing all of its attention on the U.S. market. Investors cheered the move, seemingly in the belief that a tighter focus will improve Pandora's chances of success. Greater competition in the U.S., however, could prove troublesome for the streaming-music pioneer. What Pandora does have domestically is the rights to the content it provides, and shareholders will have to hope that cost savings from abandoning the Southern Hemisphere will offset the loss of future growth potential. 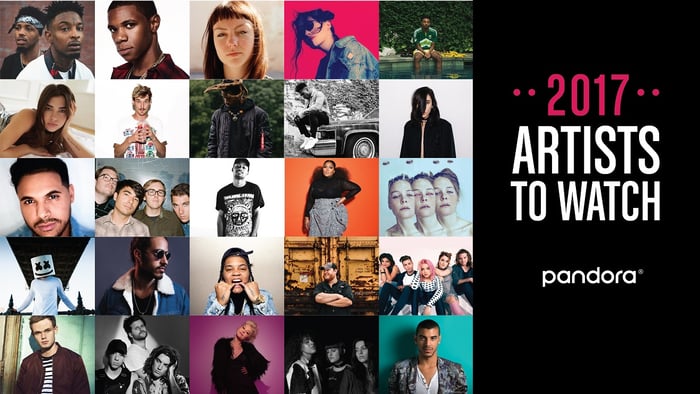 Cypress climbs on hopes for a greater iPhone presence

Cypress Semiconductor stock finished higher by 9% in the wake of positive comments from analysts at Barclays. The analysts raised their rating on Cypress shares from neutral to overweight, and they boosted their price target by almost 30% to $18 per share. The argument behind the upgrade came from the idea that the next-generation iPhone 8 will allow for faster charging of the device through the use of a more powerful wall socket plug and USB power cable connection. To facilitate that move, Cypress will need to provide different types of circuitry and components to handle the power change. Other rumors have suggested that wireless charging might be included in the next iPhone, and Cypress might not be the big winner if that occurs, but shareholders seem content for now with even the possibility of more revenue from the mobile device market.

Finally, shares of Spectranetics soared 26%. The maker of laser atherectomy catheters and blockage-attacking balloons got a buyout bid from Dutch healthcare giant Philips (PHG -2.85%). The terms of the deal give Spectranetics shareholders $38.50 per share in cash, putting a price tag of about $2.1 billion on the buyout when you consider cash and debt on Spectranetics' balance sheet. Philips believes that the acquisition will complement its image-guided therapy business, and Spectranetics' double-digit percentage growth was extremely attractive to the Dutch company. Spectranetics had already seen impressive gains in the recent past, but Philips believes there's still value in the merger.