In order for Messenger to take off financially, Facebook (NASDAQ:FB) needs to "get a lot of businesses using it organically and build the behavior for people that they reach out to businesses for different things," according to CEO Mark Zuckerberg on the last earnings call. Therein lies the real opportunity for Messenger to transform the way consumers interact with companies.

Earlier this year, at its F8 developer conference, Facebook announced a new Discover section for Messenger, which is intended to showcase "amazing experiences" for people and businesses. Yesterday, the social network announced that the Discover section is now rolling out across the U.S. There are different types of things in Discover, like reading articles or getting sports news, but by far the most meaningful from an investing perspective is the potential to introduce users to branded chatbots. 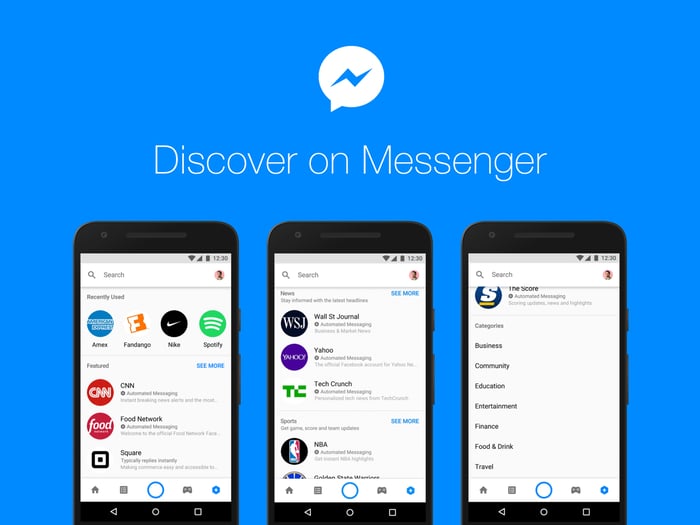 Changing established human behaviors is hard, but there's been a growing trend of users turning to social media to reach customer support. That movement mostly started on Twitter (NYSE:TWTR), but Facebook has a real opportunity here to steal the show and run with it, particularly when it comes to creating a business out of the trend.

When this shift starting nearly a decade ago, there was speculation that Twitter would start charging businesses that were using its service for customer service. Co-founder Biz Stone penned a blog post shooting down the idea, promising that Twitter would remain free for all accounts (corporate accounts or dedicated support accounts) with existing services. At the time, the company was still trying to brainstorm new services that it could offer companies for a fee, but Stone (who just recently returned to Twitter) said Twitter had no announcements to make then. There is now a small "Provides support" indicator next to official support accounts, but that's about it. Indirectly, support accounts may garner some user data from their interactions that could perhaps be used for ad targeting.

In the years since, Twitter has touted itself as an effective customer service platform -- examples here and here -- but has not announced any new revenue-generating products, which is a huge missed opportunity considering the simple fact that there's always more money in enterprise offerings than consumer ones. So while Twitter has seemingly hit a wall in terms of monetizing the growing trend of social media-based customer service, Facebook not only has an opportunity to become a leader, it also has a more viable route to monetization.

What's less clear is if Facebook is currently charging companies a fee to be included in the new Discover section. Considering how new it is, it wouldn't make much sense to charge. In His Zuckness' words, building that behavior is "the first thing that we need to do on Messenger and WhatsApp." Sending a message directly to a company is but a small behavioral step from tweeting at a company.

Automation has long been the hardest part about scaling up customer service for any organization. The chatbots that Facebook has been developing hope to solve that conundrum once and for all, much to the dismay of the roughly 2.7 million customer service representatives in the U.S. (as of May 2016, according to the Bureau of Labor Statistics) that could see their jobs threatened by chatbots.

Rudimentary chatbots have been around for decades, since the dawn of computing in the '50s and '60s. You've probably heard of the Turing test. The big difference between then and now is that the modern generation of chatbots hopes to carry conversations that are more organic and intuitive. They need to be able to follow conversations, understand context, and more. This is no easy task: Facebook's chatbot failure rate was recently estimated at 70%. Let's also not forget Microsoft's experimental chatbot Tay from last year, which was immediately commandeered into a genocidal, racist, sexist murderbot by Twitter trolls.

These are the two critical pieces to this puzzle: Facebook needs to both build up the consumer behavior while tackling the technical challenge of creating compelling chatbots for companies to use. Neither one is easy, but Facebook can work on both concurrently. Importantly, Facebook is not under financial pressure, since its core ad business is booming and shares are trading at all-time highs. Facebook can take its time to make sure it executes. You can't say the same about Twitter.