There's no shortage of schadenfreude on the market when it comes to Shake Shack Inc. (NYSE:SHAK).

The better-burger chain was one of the most hotly anticipated IPO's when it debuted in 2015, rocketing out of the gates. The New York-based chain gets a lot of love in its hometown, and much of Wall Street and the financial media were very familiar with the company -- as well as being big fans of its food. That passion may have led to a sense of euphoria around the stock, which more than doubled on its first day and eventually rose from its January 2015 IPO price of $21 to an all-time high of $96.80 in May of that year. 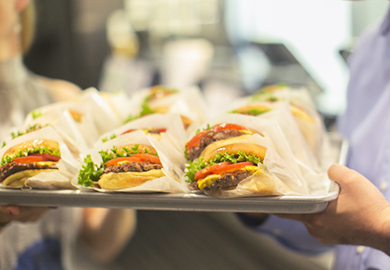 Since then, however, it's been as disappointing as soggy fries and cold burgers for Shake Shack investors as the stock fell steadily over the duration of 2015 and has traded between $30 and $40 for the last year-and-half. 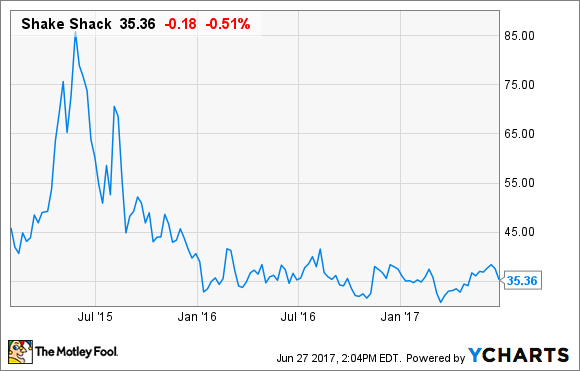 Bears have rejoiced at Shake Shack's slide, however, as many argued that the stock was ridiculously overvalued when it was soaring in its first months on the market. Today, there's a healthy amount of skepticism for the burger flipper as nearly half of the stock is sold short.

I'm a Shake Shack shareholder and am still bullish on the stock, but it's important for every investor to understand the argument against the stocks they own.

Below are the reasons that bears are betting against the stock.

Bears have been moaning about Shake Shack's valuation since the stock was in diapers. Many said the beloved burger flipper was being treated like a tech stock rather than a restaurant chain. There's no scalability they said.

Even today, shares still go for a healthy premium, at a P/E of 66. That's nearly triple the valuation of the S&P 500, and significantly higher than its restaurant peers. Because of that premium, the company is expected to deliver much faster growth than the market, and the stock will plunge if it can't.

In its most recent quarter, comparable sales were weak, falling 2.5% and average weekly sales were down as well, which fueled bear cries about the valuation. Though the stock fell initially after the report, it rebounded by the next day with the help of an earnings beat and an analyst recommendation.

Same-store sales at American restaurants have fallen for five quarters in a row now, according to Black Box Intelligence, and some have begun calling the decline a "restaurant recession."

Eateries have been plagued by lower prices at the supermarket due to food deflation, rising labor costs, overexpansion, and a decline in traffic -- especially in malls, which has been blamed on the rise of e-commerce. Shake Shack is not alone in posting declining comps, but the trend has weighed on restaurant stocks across the industry and shows no signs of letting up. While the broad market has thrived since President Donald Trump was elected, restaurants have underperformed.

Before Shake Shack's IPO, several fast casual stocks came onto the market with big plans for expansion and steep valuations. Nearly all of them have fizzled out. Those include Noodles & Company (NASDAQ:NDLS), Potbelly Corporation (NASDAQ:PBPB), and El Pollo Loco (NASDAQ:LOCO), among others. 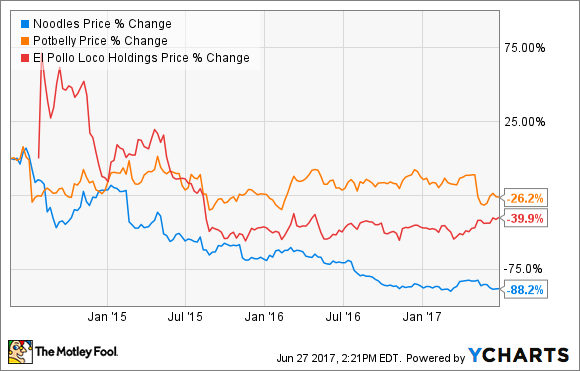 Their poor performance indicated a fast casual bubble in the market as investors misread the opportunity in the new restaurant sector. One-time market darling Chipotle Mexican Grill (NYSE:CMG) may be to blame for that as the burrito roller inspired a number of imitators, but even it had its downfall. Shares got sliced nearly in half after its 2015 E. coli outbreak, and even after moving past the crisis, the company has struggled to return to full strength as competition has increased, doubts among the public remain, and execution of its turnaround plan has often been flawed.

Many bears then expect the highly valued Shake Shack to follow in Chipotle's path, saying its earnings growth simply won't live up to expectations.

Despite those arguments, I think bears are misreading Shake Shack's opportunity. The company is just getting started on its growth path with only 71 of an expected 450 company-operated restaurants open, and unlike the fast casual chains above, Shake Shack's brand and performance are much stronger. The average Shake Shack brings in $5 million in revenue, much better than any large restaurant chain. Chick-Fil-A is the best of those with about $3 million, and McDonald's is near the top at $2.5 million. Since individual Shake Shacks are so much more successful than other chains and bring in 25% to 30% in restaurant-level operating profit, the company only needs to open more restaurants to fuel growth and profits. The expansion is the key figure to watch.

Finally, the company has beaten earnings estimates in all but one of its quarterly reports and matched them in the one it didn't. That's a sign that Wall Street is underestimating the stock.

Revenue is set to grow 32% this year and the new restaurant runway remains long. Despite the headwinds listed above and the poor stock performance thus far, this growth story should eventually materialize.