It was a good week and an even better month for Groupon (NASDAQ:GRPN) investors. Shares of the daily deals leader rose 10.7% last week, moving higher after an analyst upgrade and another Wall Street pro putting out a bullish note suggesting that Groupon is a compelling buyout target.

Shares of Groupon may have started off the month by hitting fresh 52-week lows, but wound up surging 27.6% higher. The stock has been roaring back after taking a 23.2% hit in May, fueled by a disappointing quarterly report. 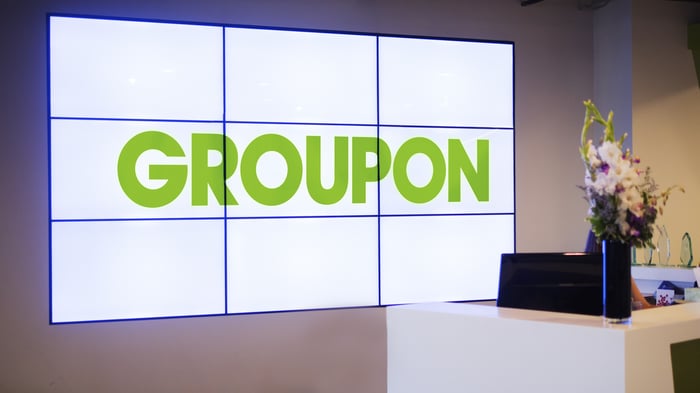 Sameet Sinha at B. Riley is boosting his rating on Groupon stock from neutral to buy, encouraged by the former dot-com darling's investments in attracting new North American users. Riley even sees a silver lining to Groupon's struggling operations overseas, arguing that the international operations could be sold off for at least $1 a share. Sinha is increasing his price target on the shares from $4.20 to $5.50.

Sinha isn't alone. He joins Samuel Kemp at Piper Jaffray who earlier in the week was reiterating his own $5.50 price target and overweight stock rating. Kemp feels that the stock is trading below fair value, making it a logical takeover candidate. He feels that Groupon's growth in its core business on the top line and cost controls working their bottom-line magic make it a viable buyout target for a larger company. He singles out IAC (NASDAQ:IAC) as a potential acquirer in light of IAC's CEO joining Groupon's board of directors. An executive doesn't join a board with grander plans of eventually swallowing it whole, but if IAC's Joey Levin likes what he sees from the inside, it's certainly not an unrealistic suggestion.

Groupon stock is compelling at this point if it's able to get folks to embrace its niche of deeply discounted local experiences again. The stock got pummeled after May's financial update, but the first quarter wasn't as bad as things appear at first glance. It may have been only the third time that Groupon posts a year-over-year decline in revenue, but bowing out of unprofitable international territories and pivoting away from its lower-margin Groupon Goods business are smart decisions. The end result was an unexpected profit on an adjusted basis, though it obviously wasn't enough to please Wall Street.

North American billings actually rose 9% during the first quarter, and it has grown its count of active customers by 0.5 million to 31.6 million. Toss in a healthy cash-rich and debt-free balance sheet, and you have a company with the financial resources to see its turnaround efforts pan out. Groupon stock is showing signs of life again, but it will need a strong report later this summer to build on those upticks.