From 2009 to 2015, Polaris Industries (NYSE:PII) saw its stock head almost straight up, as investors appreciated the efforts that the motorsports vehicle maker was making toward dominance in the off-road vehicle, snowmobile, and motorcycle industries. Yet as we've seen recently, Polaris is vulnerable to tough times, and some investors fear that the recent declines in the stock price could be just the beginning of a longer-term trend. In particular, the following three issues could weigh further on Polaris stock and cause shareholders more pain if the company can't resolve them favorably.

1. A shortfall in expected military growth could occur

Polaris is best known for its relationship with ordinary consumers. However, the off-road vehicles that Polaris makes also have potential military applications, and the company has already worked extensively with the U.S. Department of Defense to provide specially designed vehicles for use by the Armed Forces.

Polaris stock has benefited from the perception that the Trump administration expects to boost military spending in its proposed budget. However, increased concerns recently have centered on the administration's possible lack of ability to promote its domestic spending agenda, and stocks that have benefited from optimistic hopes for change could similarly fall if those hopes end up getting dashed by the harsh realities of Washington politics. Military-targeted products make up a small portion of Polaris' current business, but some investors have hoped that the segment would grow at a faster pace than the consumer business. That might not happen, either because military spending increases don't get approved or because what money does go to defense doesn't lead to more contracts for Polaris in particular. Either way, missing out on greater penetration of the military market would put downward pressure on Polaris' stock performance. 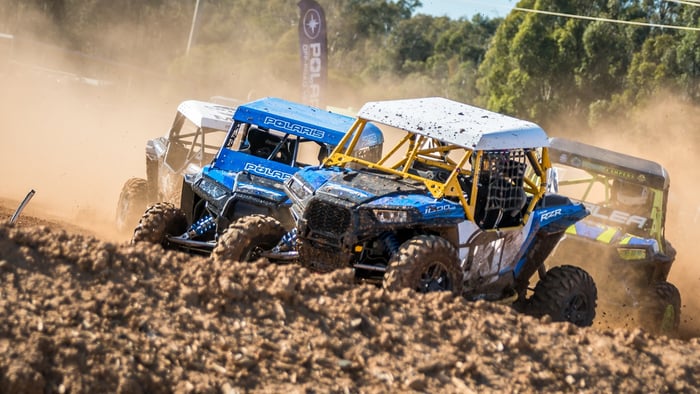 2. Prospects for the motorsports industry in general could fade

One key thing to remember about Polaris' success over the past decade is that it has come at a good time for the consumer market. After the recession in 2008 and 2009, the U.S. economy recovered much more quickly than most market watchers had expected, and that helped bolster cyclical companies like Polaris that depend on discretionary income among buyers.

However, signs of sluggishness in the consumer market for motorcycles and other products that Polaris sells are concerning for the whole industry. For instance, Harley-Davidson (NYSE:HOG) has seen its motorcycle sales fall regularly for more than two years, and although some of that decline might actually be attributable to Polaris' competitive efforts, there are also indications that the entire motorcycle sector is under pressure. Similarly, investors in traditional automakers have worried that the record sales they've seen in 2015 and 2016 are due for a pullback. If that trend makes its way more extensively into Polaris' key market segments, then it could take away a key underpinning of what has helped the company's stock rise over time.

3. Recall issues could continue to multiply

No product manufacturer likes to have to do recalls, but Polaris has been particularly susceptible to safety-related issues with its products lately. Polaris has faced recalls in areas across the globe and has had a wide variety of its product lines prove to be subject to the need for recall action.

With the preponderance of recent recalls, Polaris risks long-term reputational damage. If the company can't convince its users that it truly takes safety issues to heart, then there's only so long that Polaris will continue to sustain its sales volumes. Only by demonstrating a new commitment to higher-quality manufacturing processes will Polaris see a drop in the number and size of its recalls, and only once those recalls start to tail off will investors feel more confident that the motorsports specialist has turned the corner and can start pushing forward again. If that doesn't happen, the stock is likely to keep falling.

Polaris stock has been strong in the long run, but recent experience shows that the company's share price isn't invulnerable. The motorsports specialist will need to fight against the three potential pitfalls discussed above if it wants to avoid seeing its stock fall in the future.