It hasn't been a pleasant year for the folks at the Blue Oval. Not only is Ford Motor Company (NYSE:F) dealing with executive shakeups and turnover, its sales have declined in five of the six months during 2017. The declines have largely been due to the weakened demand for passenger cars, a decline Ford has been unable to offset with sales of its SUVs and full-size trucks, and that discrepancy has never been more apparent than it is in Ford's Jekyll and Hyde-like June sales data.

Starting from the top, Ford's U.S. sales declined 5.1% during June, down to 227,979 total vehicles. That splits out to 152,396 retail sales, which was flat year over year, and 75,583 fleet sales, which was a significant 13.9% decline compared to the prior year's June. But what really drove the decline was Ford's passenger car segment, which was down 23% to 52,731 units compared to the prior year. While Ford's full-size truck and SUV sales remain strong, it simply wasn't enough to offset the decline in passenger cars.

Customers drove a record 406,464 Ford brand SUV sales in the first half of this year, with Explorer sales increasing 23 percent in June. F-Series continues expanding its sales and share this year, with customers opting for high-series pickups and investing in class-exclusive features that only Ford trucks offer.

During the first six months of 2017, Ford's SUV sales increased 2.9% to more than 400,000 units sold, which is a first-half record for Detroit's second-largest automaker. One of the bright spots within the SUV data was Ford's iconic Explorer, which recorded a 22.7% gain in sales compared to the prior year. That marked the Explorer's best June sales data in 12 years. 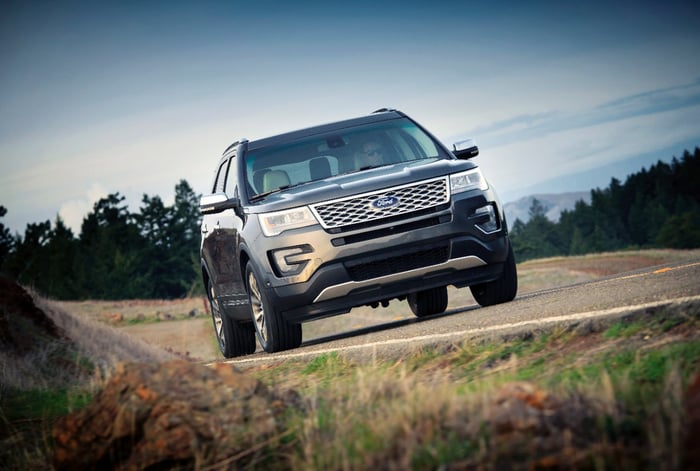 Ford's bread-and-butter product, the F-Series truck, posted a strong 9.8% gain during June to just under 78,000 units. And that's not a one-month trend as its sales are up 8.8% for the full year. Further, the first half of 2017 was the strongest F-Series result since its record sales run in 2004. That's good news when it comes to Ford's transaction prices, as full-size trucks drive high dollar price tags.

Outside of Ford's mainstream brand, Lincoln posted a strong June. The premium brand has officially tallied 17 consecutive months of increasing retail sales, and Lincoln is recording its best retail sales start in over a decade. Total Lincoln brand sales were up 5.3% to 9,275 units during June, and they remain 5.7% higher for the first half of 2017, up to 56,337 units.

Ultimately, it was a strange month when you take a step back and look at the data. SUV and full-size truck sales were strong, but Detroit automakers slipped while import brands such as Honda, Nissan, and Toyota, known for passenger car sales, posted sales gains. In the grand scheme of things, the U.S. auto industry is likely to notch its sixth straight monthly decline as the market has clearly reached its peak this cycle. That doesn't spell doom and gloom, but investors will have to adjust what data to put under the microscope as average pricing, incentives and inventory will become more important for automakers' bottom lines, rather than focusing on year-over-year sales data.