A recent article from a phenomenal author ended by concluding this:

In all honesty, though, Ford has done a lot of things right in recent years, and Fields doesn't get his fair share of credit for them. It's easy for shareholders (myself included) to be frustrated right now, but we're delusional if we think another Alan Mulally -- or anyone better suited to the role than Fields -- is waiting to take the steering wheel at Ford right now.

Unfortunately for the author, Ford Motor Company's (NYSE:F) indirect response was to name Jim Hackett as the new CEO and tout him as the next Alan Mulally. Well played, Ford. But why the move? And what did yours truly miss in defending Mark Fields?

Despite increasing frustration about Ford's stagnant stock price, this move seemed to come out of nowhere for most of us watching Ford from a distance, but Jim Hackett has been around for a while now. He was most recently the head of Ford's future-technology subsidiary, already has a spot on Ford's board of directors, and has led a company turnaround as the former CEO of Steelcase. But this move could be the result of a couple of factors that haven't gone in Ford's favor in recent years. 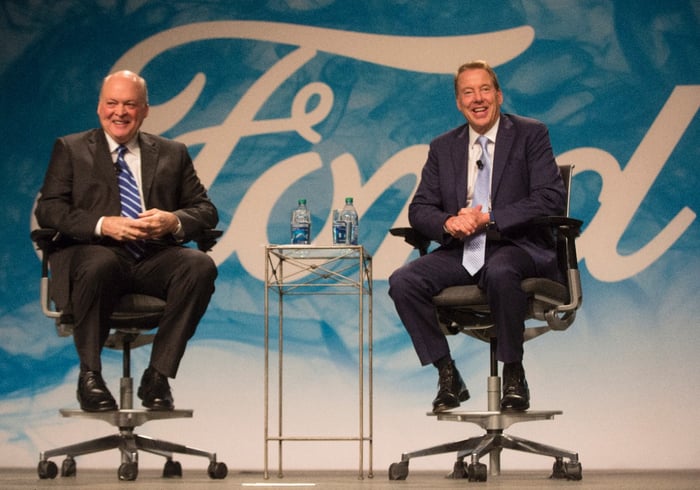 First, it's become clear that Ford has a communications problem, which Michael Martinez of Automotive News nails on the head in his piece. Think back half a decade ago, when Ford reinstated its dividend ahead of its crosstown rivals, had previously navigated the financial crisis without needing a taxpayer-funded bankruptcy, and was gearing up to use aluminum body panels on its best-selling and most profitable truck. Ford was so far ahead of its rivals in telling its story, and it was a good one, that we took that storytelling ability for granted. Ford is no longer telling the best story in Detroit. Now that distinction belongs to General Motors (NYSE:GM), which has made a big splash with its Maven smart mobility brand, invested $500 million in Lyft, and spent a rumored $1 billion to acquire Cruise Automation, a company focused on developing driverless vehicle technology.

Second, corporate culture matters. Before Alan Mulally came along and magically repaired Ford's notoriously toxic corporate culture, it was one of the biggest factors holding the company back. And because Mark Fields was essentially hand-selected by Mulally, and he'd been a chief proponent of Mulally's ways, it was taken for granted that the changed culture would stick. Perhaps, however, that hasn't been the case, as reports and rumors have suggested a return of executive infighting.

"The biggest challenge I had [at Steelcase], and I will have here, is to have everybody see the future. They can see their opportunity in that. And secondly, that it's our right to win, and we don't have to cede that to anybody, Tesla or any of them," Hackett said Monday during a news conference. "I love that challenge because I know how to do that."

It's difficult to judge the situation from the outside, but for a major change such as this to be made so seemingly quickly, there had to have been good reasoning. And Hackett has proven from his time at Steelcase that he can fuel a massive company turnaround, and proven with University of Michigan football that he can step into an unfamiliar situation and make great things happen. No, Alan Mulally was never walking back through Ford's doors, but if its board of directors has found the second coming of the respected executive already under the company's roof, investors will be thrilled.