Please ensure Javascript is enabled for purposes of website accessibility
Log In Help Join The Motley Fool
Free Article
Join Nearly 1 Million Premium Members And Get More In-Depth Stock Guidance and Research
By Daniel Miller – May 19, 2017 at 10:45AM

Scrutiny on Ford CEO Mark Fields and the automaker's strategy is increasing, but are investors being delusional about the situation?

Sports and stocks don't share too many commonalities, but one concept sports fans and investors both understand is the "hot seat." And unfortunately for Ford Motor Co. (F -1.56%) investors, the increasing scrutiny on CEO Mark Fields is putting him on a hot seat similar to the ones occupied by every Cleveland Browns coach over the past decade. A more clear-eyed look at why he's being targeted reveals the reasons to be a little delusional.

Ford isn't the only automaker whose stock is struggling

Sure, it's easy to understand the board of directors' frustration; it's also easy to understand the frustrations of everyone from Ford's top-level executives down to its smallest shareholders. For the most part, everybody was right in their bullish thesis that after the dark days of the Great Recession, the automaker would be able to generate years of record profits. But instead of the market reacting favorably to reward a company that had learned valuable lessons and flipped its business entirely around, Wall Street responded by essentially saying, "Well, what if this is as good as it gets?". But is that really fair for a company that is coming off its two best ever pre-tax profit years in 2015 and 2016? 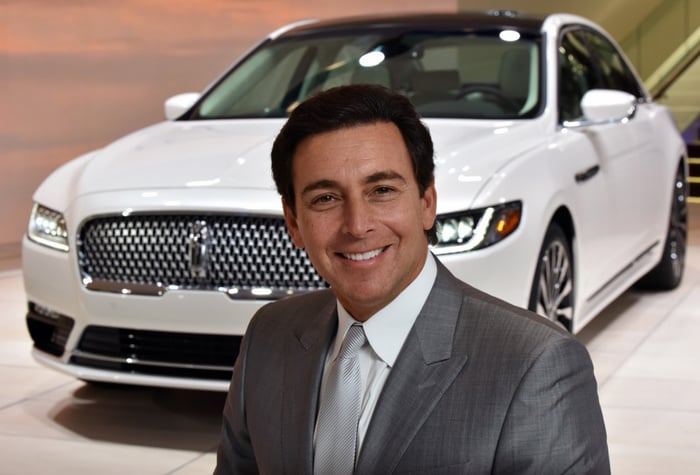 Unfortunately, as North America's auto market plateaus, the growth story is going to become tougher to sell investors -- and that's baked into the share price.

Here's the thing, Ford's not the only automaker struggling in one way or another right now. Look at Toyota Motors (TM -0.77%): It's arguably one of the best-run companies in the world, with manufacturing prowess that would be the envy of any industrial company. But it recently handed the global sales crown to Volkswagen, despite all the fallout from the German automaker's diesel emissions deception. Toyota's profits were demolished, with operating profit down 20% thanks to foreign exchange rates and costs during the fourth quarter of its fiscal year. And despite the globally respected automaker's recent success -- prior to 2016, it had recorded three years of record results -- company President Akio Toyoda admitted he was feeling the pressure already, as he didn't anticipate an immediate rebound in profits.

"I feel a strong sense of crisis about whether or not we are actually executing car-making from the perspective of the customer in all Toyota workplaces, from development, production, procurement and sales, all the way to administrative divisions," said Toyoda, grandson of the company's founder, according to Automotive News. "In the case of sports, booking two consecutive years of losses would mean you are failing," Toyoda continued. "I hate to be beaten."

And let's not forget Ford's crosstown rival, General Motors (GM -1.31%), which churned out a quarterly record consolidated EBIT-adjusted result as recently as Q2 2016, and followed that with a third-quarter record, and recently posted a first-quarter record to kick off 2017. Despite these results, the market has similarly written off the automaker's stock; GM trades at a paltry forward price-to-earnings multiple of 5.3, per Morningstar.com estimates. In fact, GM has even had to defend itself recently from Greenlight hedge-fund manager David Einhorn and his proposal to split GM's stock to drive value. GM CEO Mary Barra has done an excellent job, but the stock price hasn't performed. Yet she's largely avoided the hot seat that Fields finds himself in.

Fields is caught between a rock and a hard place. Automakers operate in a capital intensive industry that's expected to evolve more during the next two decades than it did over the past century. Adapting to the advent of autonomous vehicles, electric vehicles and ridesharing won't be cheap, nor will the investments required bear significant fruit for years.

On Wednesday morning, in the face of that recently increasing pressure, Ford announced plans to reduce costs that include cutting 10% of its salaried workforce and personnel in North America and Asia-Pacific region this year, through the use of voluntary packages. It's a move that seems drastic, as Ford is far from the only automaker facing headwinds from a falling stock price and the rising costs of investing, researching and developing its long-term future

In all honesty, though, Ford has done a lot of things right in recent years, and Fields doesn't get his fair share of credit for them. It's easy for shareholders (myself included) to be frustrated right now, but we're delusional if we think another Alan Mulally -- or anyone better suited to the role than Fields -- is waiting to take the steering wheel at Ford right now.