Shares of Netflix (NASDAQ:NFLX) rose 20.7% in the first half of 2017, according to data from S&P Global Market Intelligence.

The digital video veteran presented two quarterly reports in January and April, handily beating the Street's earnings targets in both reports. Netflix also found a back door into the elusive Chinese market, partnering with a video service from local hero Baidu (NASDAQ:BIDU).

It wasn't all wine and roses for Netflix. Shares are trading more than 10% below the all-time highs that were set in early June, as analysts and investors suddenly turned a skeptical eye to the FANG group of high-growth internet stocks. Netflix is the "N" in that acronym, of course.

Netflix is gearing up for a second-quarter update on July 17, and that report could very well make the FANG skeptics look like the boy who cried "wolf." The company's strong slate of Netflix originals points to another Street-beating report. And don't forget that Netflix is stepping up its bottom-line earnings in a big way these days. Those lofty P/E ratios should start to look reasonable as the earnings side of that equation expands. 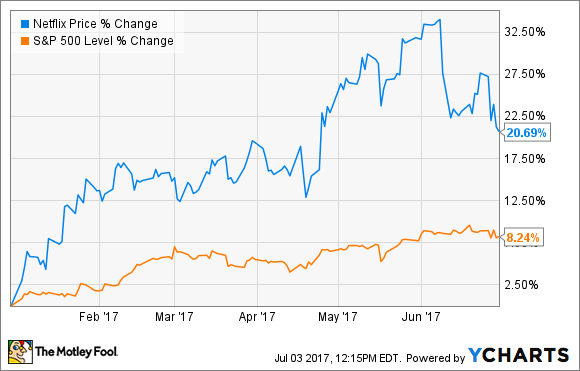