Please ensure Javascript is enabled for purposes of website accessibility
Log In Help Join The Motley Fool
Free Article
Join Nearly 1 Million Premium Members And Get More In-Depth Stock Guidance and Research
By Daniel B. Kline – Updated Jul 3, 2017 at 8:17AM

A complaint filed in federal court alleges that the coffee chain has been making false claims in its ads.

When it's time for a great steak, few people head out to Dunkin' Brands' (DNKN). Dunkin' Donuts. But while the coffee and doughnut chain may be best-known for lower-brow fare, it does have steak on its menu. The company sells Angus Steak & Egg breakfast sandwiches.

A proposed class action lawsuit, which was filed in the United States District Court in the Eastern District of New York, alleges that Dunkin' Donuts advertises steak, but sells something else. Brought on behalf of initial complainant Chufen Chen, the complaint alleges that the company engaged in a "pervasive pattern of fraudulent, deceptive and otherwise improper advertising, sales, and marketing practices" related to its Angus Steak & Egg sandwich.

At the core of the argument is a federal regulation that provides a legal definition for steak. According to the rule, steak "consists of a boneless slice or strip of poultry meat of the kind indicated." The Dunkin' Angus "steak," the complaint alleges, is a beef patty containing fillers and binders.

The company rebutted the charge in a statement made to CNN by company spokesperson Michelle King, who said, "While we are limited in what we can say at this time due to pending litigation, we can assure you that Dunkin' Donuts' Angus steak-and-egg sandwich is made with real Angus beef, marinade and seasonings." 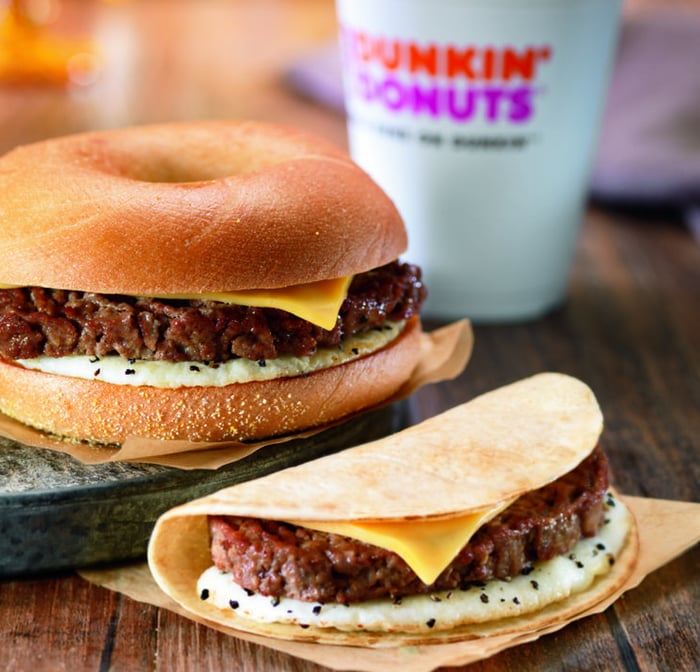 These types of suits are common

In most cases, these legal actions may bring negative attention to the company, but are generally not successful in producing significant monetary awards for the plaintiffs. Subway, for example, paid $525,000 in legal fees while also agreeing to to take steps to ensure that its sandwiches are actually the lengths advertised.

That's actually a pretty big win (at least for the lawyers) compared to the class action involving Starbucks allegedly not filling its iced drinks enough. That one was thrown out of court by U.S. District Judge Percy Anderson, Law360 reported.

If children have figured out that including ice in a cold beverage decreases the amount of liquid they will receive, the court has no difficulty concluding that a reasonable consumer would not be deceived into thinking that when they order an iced tea, that the drink they receive will include both ice and tea and that for a given size cup, some portion of the drink will be ice rather than whatever liquid beverage the consumer ordered.

Starbucks still faces a similar lawsuit over its hot beverages and the KFC bucket suit has yet to move forward.

What will happen to Dunkin' Donuts?

On its website, Dunkin' describes its steak breakfast sandwich as having the "irresistible flavors of Angus steak, egg and American cheese." The company goes even further and under ingredients calls the meat a "steak patty," listing a long array of ingredients, though Angus beef is at the top.

It's hard to imagine a judge finding that Dunkin' Donuts has committed fraud. The company may not be selling a steak, but its sandwich is made (mostly) of steak.

This type of lawsuit serves little purpose other than generating publicity for lawyers and perhaps showing consumers that they should be a little skeptical when ordering an item based on seeing a commercial. People may be disappointed after ordering a "steak" sandwich from Dunkin' Donuts, but it's hard to imagine that most are even surprised by that, let alone outraged or left feeling defrauded.