Altria Group (NYSE:MO) and Coca-Cola (NYSE:KO) have two of the best-known brands in the world, and their stock performance over the long haul has earned investors huge profits. The two consumer goods stocks also share controversy. Coca-Cola has come under fire for the health effects of its sugary soft drinks even as Altria continues to take criticism from consumer advocacy groups about the health impacts of smoking and tobacco products. Investors want to assess the risks and rewards and know which stock is the smarter play right now. Below, we'll look at some key metrics for both companies to see whether Coca-Cola or Altria is the better buy for investors. 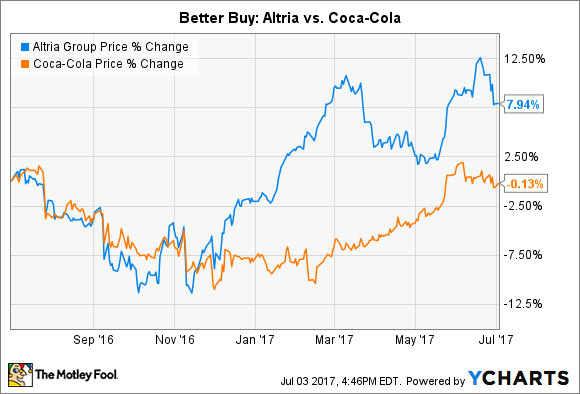 Neither Altria nor Coca-Cola has done a lot in the past 12 months, but Altria's shares have still managed to eke out a slight gain. The tobacco giant has climbed 8% since July 2016, compared to flat performance for Coca-Cola.

Even though Coca-Cola hasn't seen its stock price move up, it still looks more expensive on most simple valuation measures. For instance, when you look at trailing earnings over the past 12 months, Coca-Cola currently trades at almost 32 times its trailing earnings, compared to a multiple of just 10 for Altria. Some of Altria's artificially low trailing price-to-earnings ratio comes from one-time gains from the sale of its interest in beer maker SABMiller to Anheuser-Busch InBev, but even when you account for that transaction, Altria still looks less expensive. 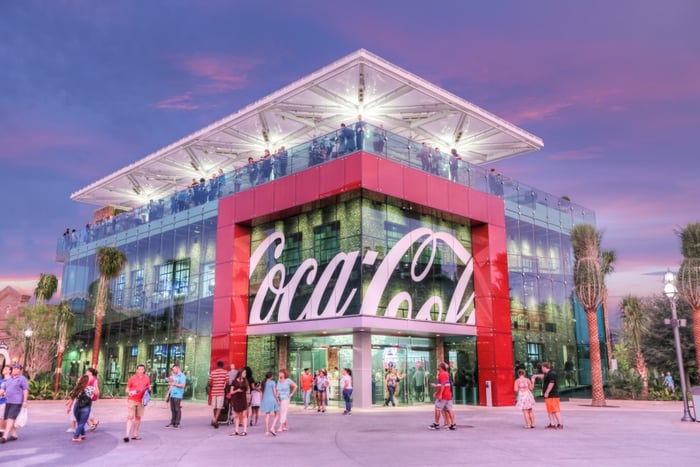 For dividend investors, Altria Group and Coca-Cola look extremely similar. Both stocks have dividend yields of 3.3%, and both consumer companies pay out the vast majority of their adjusted earnings to their shareholders as dividends.

The track records that Altria and Coca-Cola have developed are also similar. Altria raised its dividend by 8% last September, which was the 50th time it had boosted its payout in nearly half a century. Coca-Cola made 2017 the 55th straight year of dividend increases with a 6% rise in March. It's just about impossible to name a winner between Altria and Coca-Cola when it comes to dividends.

Growth has been a challenge for both Altria and Coca-Cola, and they've fought hard to stay on top of their respective businesses. For Altria, the most recent quarter brought a revenue gain of just 1%, but strong pricing power helped the tobacco giant produce a 15% rise in net income. Marlboro market share fell slightly, but Altria retained command of the overall cigarette business with a 51% share in total. A recall of smokeless tobacco products hurt the company's smokeless division, and CEO Marty Barrington acknowledged "short-term headwinds" in its results. On the plus side, Altria still expects strong adjusted earnings growth of 7.5% to 9.5%, and it's hopeful that it can sustain a similar growth rate in future years as well.

Coca-Cola has had to deal will similar revenue pressure because of the falling popularity of its sweetened carbonated beverages. In its first-quarter results, Coca-Cola suffered a huge sales drop of 11%, much of which was due to bottling investments. Yet even when you take away that impact, net revenue in North America climbed just 1%, and sales declined in the Asia-Pacific, Latin America, and European segments. Comparable earnings per share fell 2%, and strength in pricing was offset by lower case volumes in sparkling soft drinks. Coca-Cola expects adjusted earnings to fall for the full 2017 year compared to 2016 levels, and it could take time for new CEO James Quincey to keep executing the company's plans for strategic transformation going forward.

Altria Group and Coca-Cola have both successes and difficulties, and Coca-Cola has had to do a more radical shift in its mindset than Altria thus far. With a slightly cheaper valuation, Altria is the better buy right now, but those who believe that Coca-Cola's turnaround will work might be willing to pay a little more for the upside potential in the soft drink giant.