These mid-cap blend ETFs offer a low-cost way to own a diverse portfolio of mid-cap stocks. Here's how to find the right fit for your portfolio.

Instead of picking mid-cap stocks on your own, an index fund or ETF is a great way to buy a portfolio of stocks that is likely to beat the market average over the long haul. Mid-cap blend funds have historically produced higher returns than large-cap funds due to the fact that mid caps have more room for growth, and are generally attractively sized for acquisitions by large-cap companies.

These three mid-cap blend ETFs below offer wide diversification at a low cost, making them the best choices on the market today.

Why invest in mid-cap stocks

Though definitions vary, mid-cap stocks are generally recognized as those with a market capitalization, or stock market value, between $2 billion and $10 billion. In the most recent 15-year period, mid-cap stocks generated annualized returns that were more than 2 percentage points higher than a portfolio of large caps, helped by the fact that mid-cap businesses typically have more room for earnings growth than larger, established companies.

Outperformance from this segment of the market isn't purely driven by the strength of smaller stocks when stock prices are rising, however. History shows that mid-cap-sized businesses have proven to be more resilient in downturns. A paper by Hennessy Funds explains that in the two most recent recessions in the United States, mid-cap companies saw their earnings fall by a substantially smaller degree than small- and large-cap companies.

Below is the peak-to-trough decline in earnings during the last two recessions:

Charles Schwab has aggressively reduced stock commissions and expense ratios across its suite of exchange-traded funds, making its core ETFs the lowest-cost funds on the market today. Its low-cost mid-cap ETF tracks the Dow Jones U.S. Mid-Cap Total Stock Market Index, which selects stocks based solely on their market capitalization, or market value.

The index's methodology for selecting stocks is simple. First, stocks are ranked by market cap. The stocks that rank from 500 to 1,000 are included in the Dow Jones U.S. Mid-Cap Total Stock Market Index, which is used to create the Schwab U.S. Mid-Cap ETF.

The stocks that make the market cap cut are then market cap-weighted in the portfolio, thus the largest companies make up more of the index as a percentage of assets. The result is a portfolio that has an average market cap of $7 billion, making it perhaps the closest thing to a "true" mid-cap fund.

Data source: Morningstar, S&P Global. *Return is a month-end return of the underlying index as of the end of June 2017; ETF returns would have been slightly lower, due to the Schwab funds' expense ratio.

The upsides of this fund are wide diversification (it includes roughly 500 stocks at any given time) and its low expense ratio, which makes it the cheapest mid-cap blend ETF on the market.

The downside of this fund is that it has only a few years of history, compared to Vanguard and iShares' mid-cap blend ETFs, which have more than a decade of historical performance each. But this fund checks the boxes for having mid-cap stock exposure at an extraordinarily low price.

The larger side of mid-cap ETFs

The index's methodology results in a fund that blurs the lines of mid- and large-cap stocks. The average stock in the Vanguard Mid-Cap ETF has a market cap of approximately $13 billion.

To illustrate just how large its biggest holdings are, consider that EA (EA -0.53%), its largest holding at the time of writing, is also in the S&P 500 Index, a large-cap stock index.

Its bias toward larger mid caps means that it is less likely to outperform the mid-cap crowd in bull markets, when smaller stocks generally perform best. Notably, the fund has ranked in the top 13% of mid-cap funds over the last five years and in the top 30% over the last 10 years. That outperformance is largely driven by a below-average expense ratio, given that the mid-cap category includes many actively managed mid-cap funds that carry higher fees. 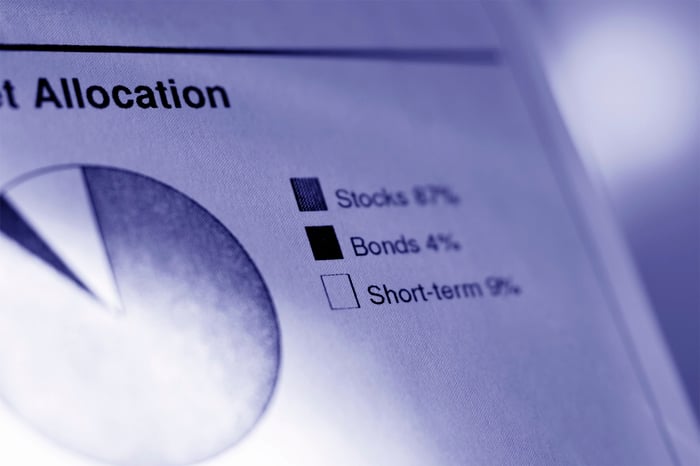 The smallest of mid caps (and the best performance)

The iShares Core S&P Mid-Cap ETF has generated the best long-term performance of any mid-cap ETF on this list, in part because of its bias toward the smallest of mid-cap companies. The fund's average holding had a market cap of $4.8 billion, compared to $7 billion for Schwab's ETF, and $13 billion for Vanguard's fund.

This ETF tracks the S&P Mid Cap 400 Index, which employs a different methodology for stock selection than the two ETFs above. Rather than pick stocks by market cap alone, S&P indexes generally rely on a "selection committee," which is responsible for adding or removing stocks from the index. Some basic parameters apply -- stocks must fit a market cap size and have generated a profit over the last four quarters to be eligible. The index typically includes about 400 stocks at any given time.

The S&P Mid-Cap 400 index is generally seen as the mid-cap index, frequently referred to as a benchmark for actively managed mid-cap mutual funds. Thus, this is the index that most actively managed mid-cap funds try to beat, though few have after fees and expenses are taken into account. iShares Core S&P Mid-Cap ETF topped 85% or more competing mid-cap funds during the most recent five-, 10-, and 15-year periods.

Picking the best mid-cap blend ETF for your portfolio

Selecting a good mid-cap blend ETF isn't just about investing in the fund with the best historical performance. A mid-cap blend ETF should further diversify a portfolio by adding exposure to stocks that aren't part of a fund in your portfolio.

Likewise, the Vanguard Mid-Cap ETF fits well with the Vanguard Large-Cap ETF, both of which are based on CRSP indexes, and thus have minimal overlap. On the other hand, the Schwab U.S. Mid-Cap ETF is a tough fit, because the largest 250 holdings in the mid-cap ETF will overlap with the 250 smallest holdings of the Schwab U.S. Large-Cap ETF. For this reason, Schwab's ETF doesn't offer as much diversification when paired with its seemingly complementary large-cap ETF offering.

Realistically, though, any fund above could be a great pick, if only for the fact that each ETF has a huge cost advantage over the average actively managed stock fund. Data from the Investment Company Institute reveals that the average actively managed stock fund carried an expense ratio of 0.82% in 2016, nearly 12 times more than the costliest ETFs on this list. Lower expenses make it mathematically much more likely that these three funds will outperform the average mid-cap fund, after fees and expenses are taken into consideration.