The word "benchmark" gets thrown around a lot in the financial media, yet many people don't know the definition of a benchmark. Let's go over what it means and how investors can put this concept to use.

Originally a surveying term, "benchmark" has evolved into financial speak for a standard by which performance is measured. Photo: Flickr user Travis White.

Benchmark definition
According to Merriam-Webster, the literal definition of a benchmark is "something that can be used as a way to judge the quality or level of other, similar things." But in the world of investing, it refers to a standard against which an investment's performance is measured.

There are a number of commonly used benchmarks in investing, but most are indexes, like the S&P 500 (^GSPC 1.97%), the Dow Jones Industrial Average (^DJI 1.88%), and the Russell 1000. These indexes are lists of stocks that are grouped together based on certain criteria -- most often the underlying companies' size and/or industry. The idea behind an index is to create a standard for gauging the performance of the market (or a particular sector of the market) and comparing the returns of individual investments.

Choosing the right benchmark
Mutual funds and ETFs will typically give you historical performance against the appropriate benchmark based on the goals, makeup, and objectives of the fund. Stock returns are often compared to the S&P 500, which is a broad-based index of U.S.-based blue-chip stocks. As a general measure, the S&P 500 is an appropriate benchmark for gauging the performance of your holdings and the stocks you're interested in buying.

But it's important to keep in mind that you can't compare every investment to the world's most popular benchmark index.

If you were comparing the total returns of, say, the PIMCO Total Return R fund to the S&P 500, you'd think that fund was a terrible investment: 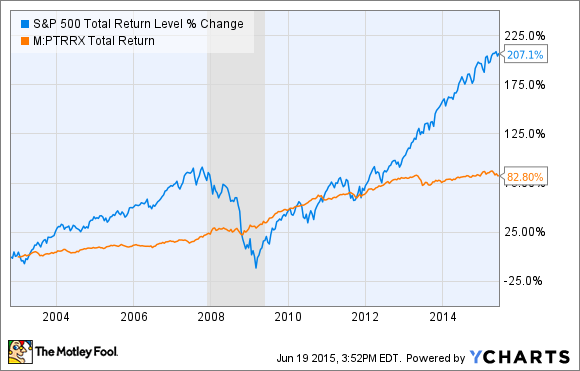 However, the PIMCO Total Return fund is a bond fund, and the S&P 500 is a broad index of stocks, which are not a comparable investment. Sure, the S&P 500 has much higher total returns than the Total Return fund, but investors in a bond fund aren't trying to beat the market, but rather to preserve capital and avoid the sudden declines in value that stocks can experience (see the sharp drop in the blue line within the gray block, which represents the most recent U.S. recession).

To start, the best use of a benchmark index is to measure the individual performance of its components against the whole. For example, here's how well-known S&P 500 component Wells Fargo & Co has performed against the index since 2000: 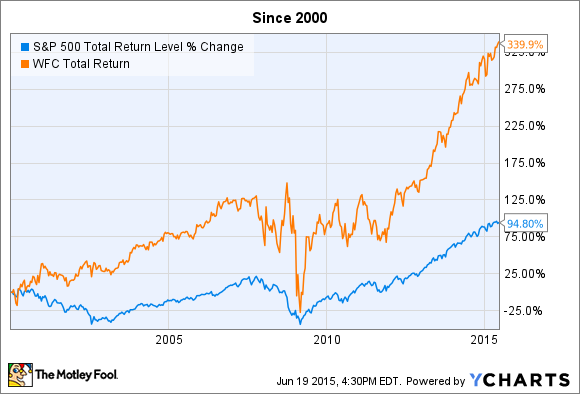 What makes the S&P 500 an appropriate benchmark for many stocks? As a starting point, it's very broad-based. According to S&P, about 80% of the U.S. stock market's value is reflected in the S&P 500 components. On the other hand, if one were looking at a much smaller bank like BofI Holding, then it's worthwhile to compare it to a small-cap index like the S&P SmallCap 600: 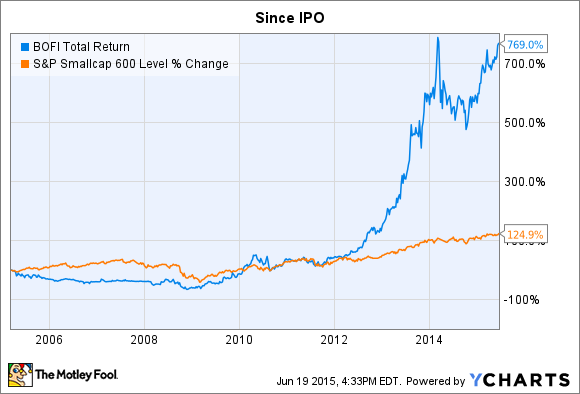 But even then, the S&P 500 isn't necessarily inappropriate, as it offers a look at the stock's performance versus what a large portion of the market delivers -- a target that the average investor should expect to match, if not beat.

Portfolio management and measuring your performance
If you're picking your own stocks, or even a basket of mutual funds, it's important to measure how you're doing over long periods of time. There are two key reasons:

Let me stress this: Short-terms returns (both strong and poor) can be misleading. Benchmarks are best used to evaluate returns over multiple years. Measuring your investments' performance every day, or even every month, is a recipe for emotional, overly active trading.

Don't mistake past performance for future results
While great companies have a habit of continuing to be great, don't make investing decisions based solely on a company's past history of outperforming or underperforming its benchmark.

Such comparisons can help inform your decision, but they shouldn't be the decision-makers. It's even more important that you understand the company as it is today, and if you choose to invest in a company, make the decision based on the company's merits -- i.e., whether or not it is built for success -- not how much it outperformed its benchmark last year.