With eBay's (NASDAQ:EBAY) stock up an impressive 46% the past year, finding other stocks to match, let alone beat, its returns was a challenge. But that doesn't mean there aren't a number of candidates, including Microsoft (NASDAQ:MSFT), fast-growing cloud e-commerce leader Shopify (NYSE:SHOP), and upstart fiber optics provider Applied Optoelectronics (NASDAQ:AAOI). Let's see what our Foolish investors have to say about these three stocks.

Tim Brugger (Microsoft): Though Microsoft's stock hasn't quite lived up to eBay's returns the past year, investors and pundits alike appear to be finally buying into the company's transition to the cloud and its forays into artificial intelligence (AI) and augmented reality, among other fast-growing markets.

It was a little over three years ago that CEO Satya Nadella introduced Microsoft's "cloud-first, mobile-first" plans, and it's been an unmitigated success. Last quarter, Microsoft's annualized cloud revenue run rate exceeded $15.2 billion, putting it near the top of the provider list. For perspective, a year ago Microsoft's annual cloud run-rate was over  $10 billion.

Better still, Microsoft's focus on delivering software as a service through its Azure cloud platform is spot-on, given that data hosting is already a commodity. The cloud is driving outstanding performance of Microsoft's legacy offerings, including a 45% jump in commercial Office 365 sales, an 81% year-over-year increase in dynamics revenue, and a more modest but still sound 15% gain in server-related products.

Another reason Microsoft has share price return potential similar to eBay, if not more in the years ahead, is that its AI and other futuristic data analytics solutions are still in their early growth stages. The AI market is expected to reach  $12.5 billion this year, and as the Internet of Things expands, all those connected "things" producing unimaginable amounts of data will give a boost to what's already a booming market.

Toss in Microsoft's 2.25% dividend yield in addition to its multiple long-term revenue opportunities, and it shouldn't be long before eBay's returns will look mediocre by comparison. 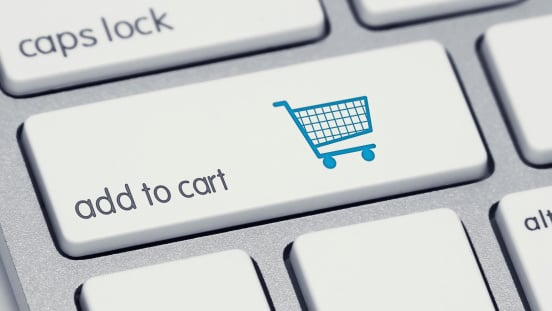 This new kid on the block is growing gangbusters

Neha Chamaria (Shopify): If eBay's rally has left you hungry for even greater returns, you simply can't miss Shopify. In fact, Shopify's business is similar to eBay's, in the sense that both companies provide platforms for merchants to sell their products and services online. But what sets Shopify apart is that it provides merchants a customized storefront, offers options to sell directly through social-media platforms such as Facebook or even in store, and has lucrative pricing policies. Even Amazon.com couldn't resist Shopify's offerings and decided to partner with it after shutting down a similar product of its own.

If that doesn't convince you of Shopify's potential yet, consider that the company's merchant base has crossed 400,000, and they're spread across 175 countries. In its last quarter, Shopify processed orders worth nearly $4.8 billion on its platform, and it now projects that its revenues -- which come by way of the fees that merchants pay monthly to use the platform, as well as earnings from transaction and shipping -- to grow 60% at the midpoint from fiscal 2016 levels this year.

One big reason I like Shopify, though, is innovation. From setting up an in-house payments gateway to moving into the hardware side of payments processing by launching its own credit card reader, Shopify has consistently surprised investors.

So what you have here is a young, ambitious company that's moving into the highly competitive but rapidly growing e-commerce space with a customer-centric focus and innovation. Shopify isn't making any money yet, but that's no big deal for a company that's just getting started and is focused on establishing its business.

Of course, Shopify comes with its fair share of risks like any other company, but patient investors who can stomach the volatility could be richly rewarded down the line.

Rich Duprey (Applied Optoelectronics): Doesn't anyone think Applied Optoelectronics can rise higher still? Although the fiber-optic network products provider has surged 447% over the past year as customers such as Microsoft and Amazon.com increased their demand for data center work, causing segment revenues to more than double, the number of short sellers has steadily risen as well -- and now 53% of its float is sold short. A lot of people are expecting this stock to fall.

While it's possible they'll be correct in the short term, there's nothing to suggest that the long-term outlook for Applied Opto is anything but bright. Internet companies are upgrading to 100-gigabit-per-second technology. Whether it's telecoms such as Verizon or the likes of Facebook and Google, the need for cloud-connected data centers that can handle the burgeoning server-to-server traffic while providing high-speed data links between the centers is as hot as ever. Some analysts estimate that the market for such gear will be growing at better than 30% annually for the next few years.

As the amount of traffic traveling between data centers explodes, Applied Optoelectronics is sitting atop the field. Amazon alone accounts for about half of its revenue, and as there seems little impediment in the way of the e-commerce king, Applied Opto will be going along for the ride.

Nothing grows forever, and the fiber optics network products maker has pulled back almost 20% from its recent record highs -- yet that may be the best the short sellers can hope for, as Applied Opto trades at just 11 times next year's earnings estimates, with Wall Street anticipating earnings to expand 17% annually for the next five years. Those betting against continued growth may well find themselves coming up short.