Maybe it's the image of scraggly bearded men shouting "Eureka!" at the appearance of shiny flakes of gold on wet screens that makes many people associate gold investments with miners. In modern times, though, investors looking for a way to profit from the precious metal can choose from another, more lustrous group of stocks: royalty and streaming companies.

In exchange for up-front payments to the gold-mining companies, royalty and streaming companies get rights to purchase the mined metal at present prices or receive a percentage of mineral production from a mine. This makes companies like Royal Gold (NASDAQ:RGLD), Franco-Nevada (TSX:FNV), and Wheaton Precious Metals (NYSE: WPM) less subject to the significant capital costs of sustaining operations at a mine, or the varying price of the metal. But there's much more to unearth about these businesses, so let's dig in and get to know them a little better. 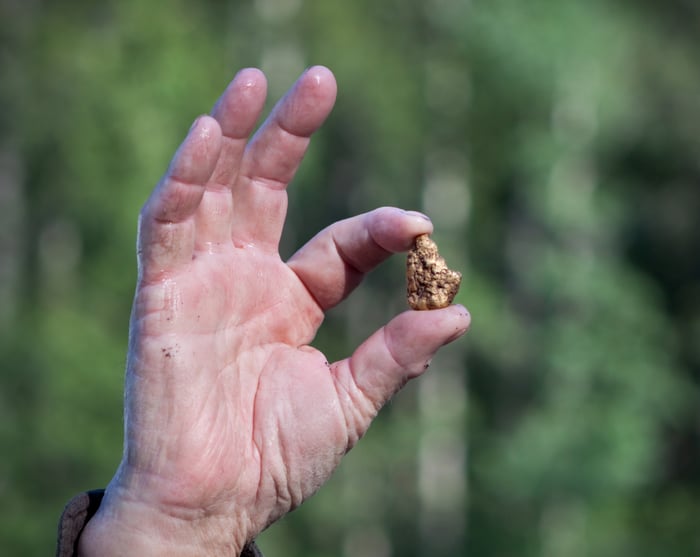 Using the price of gold as the benchmark to measure these companies against, a clear pattern emerges. Over the past 10 years, royalty and streaming companies' stocks have outperformed. One reason is that when they buy streams, they're gaining rights to purchase gold at a steep discount to the spot price. The stream that Royal Gold acquired for Barrick Gold's (NYSE:GOLD) Pueblo Viejo mine, for example, allows Royal Gold to pay 30% of the spot price for the first 550,000 ounces of gold production and 60% of the spot price for the remaining life of the mine. 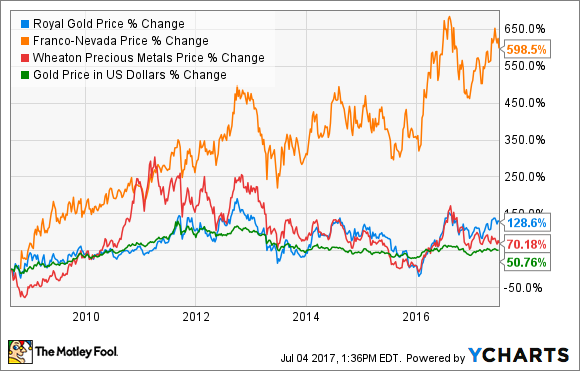 Gold miners, however, don't have the same luxury; they are significantly more impacted by the volatility of gold's spot price. For example, in a recent investor presentation, Newmont Mining Corp. (NYSE:NEM) estimated $1,200 per ounce would be the average price of gold in its fiscal 2017, which just ended; an average price $100 per ounce higher, though, would have effected a $350 million increase in the company's free cash flow. Yamana Gold (NYSE:AUY) estimated its average gold price will be $1,250 per ounce for the fiscal year; a $50 change, though, would impact its EBITDA by $46 million. 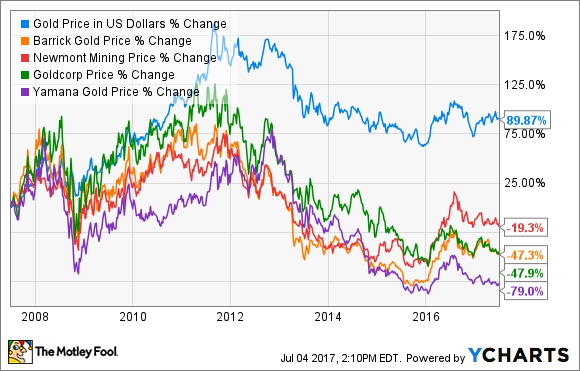 But even rising gold prices aren't a guarantee of growth for a miner's share price. Barrick, Newmont, Goldcorp (NYSE:GG), and Yamana have all reported stock declines over the past 10 years while gold has risen nearly 90%.

Beyond their superior capital appreciation, royalty and streaming stocks are more appealing thanks to their better dividends. 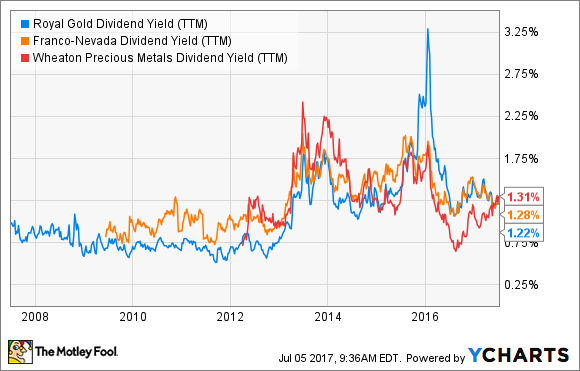 The miners' dividend yields in the peer group, however, only range from Newmont Mining's 0.54% to Yamana Gold's 0.85%.

When searching for the royalty and streaming company that offers the greatest exposure to the yellow stuff, one needs to look no further than Royal Gold, which attributed 85% of its revenue in fiscal 2016 to gold. During the same period, gold only accounted for 46% and 70% of revenue for Wheaton Precious Metals and Franco-Nevada, respectively. And Royal Gold has translated its sales to growing cash flow. According to Morningstar, over the past five years, the company has averaged $169 million in operating cash flow, but in the 12-month period that ended March 31, the company reported operating cash flow of $250 million.

The company's future seems lustrous as well; its portfolio consists of streams and royalties from 38 gold-producing operations and 193 total interests, including projects in exploration and development phases. Specifically, the company expects steady growth over the next few years from three projects: Rainy River, Cortez Crossroads, and Penasquito Pyrite Leach Project in 2017, 2018, and 2019, respectively -- all of which have already been paid for.

Dubbing itself as "the gold investment that works," Franco-Nevada -- with a market cap of about $13 billion -- represents the largest company among its peers. But it's far more than just a gold player. Of these companies, Franco-Nevada has the most diverse portfolio, which may add to its appeal for more conservative investors. The company also generates revenue from silver, platinum group metals (platinum and palladium), copper, nickel, uranium, and iron ore. And beyond minerals, its oil and gas assets contributed about 5% to the top line in its fiscal 2016. In total, Franco-Nevada's portfolio consists of 339 total assets.

Another reason why Franco-Nevada glitters is its exceptional proficiency in generating free cash flow -- a trait that greatly distinguishes it from its mining peers. 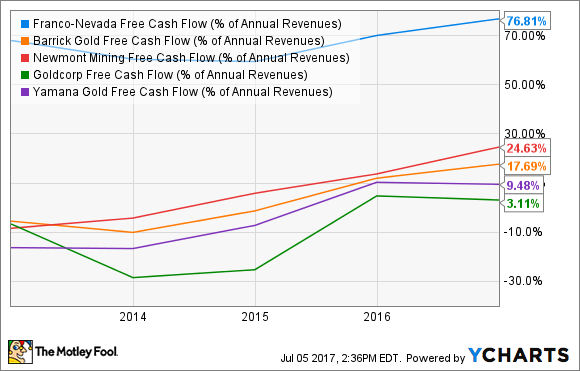 In fiscal 2016, for example, the company generated about $77 in free cash flow for every $100 in revenue. Between this and the fact that it has no debt, it's in a great position to return more cash to shareholders or grow its portfolio through acquisitions.

To dismiss Wheaton Precious Metals because of its smaller portfolio -- 21 operating mines and 8 development projects -- and lack of diversity -- it's only interested in gold and silver -- would be foolish. For what it lacks in these two areas, it makes up for in its capacity to generate revenue: Sales totaled $892 million for its fiscal 2016, outpacing the $610 million and $360 million that Franco-Nevada and Royal Gold reported, respectively. But its value isn't solely based on the top line; it's illustrated throughout the income statement. 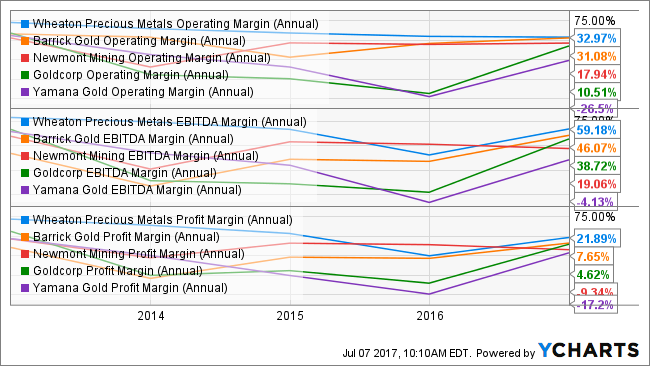 The yellow stuff may comprise a smaller portion of the company's portfolio, but its commitment to the metal remains steadfast. According to a recent presentation, the company expects gold to represent 45% of its revenue through 2021. And with deals like the 70% gold stream from Vale's Sudbury mine for the next 20 years and a 75% gold stream from Vale's Salobo project for the life of the mine, gold will surely remain an important part of Wheaton Precious Metals' portfolio well beyond 2021.

Gold miners are certainly worth consideration if you're interested in gaining exposure to gold, but royalty and streaming companies -- between dividends, free cash flow generation, and high margins -- offer much more compelling investment opportunities. And between Royal Gold, Franco-Nevada, and Wheaton Precious Metals, investors have several choices that give them varying degrees of exposure to the metal.