The company has been the dominant brand for seasoning and spices in the U.S. for the last century, but will it hold onto its title in this changing retail landscape?

In the age of the internet, McCormick & Company (MKC 1.16%) is adapting its business model to thrive in an environment where shopping habits are rapidly changing. The company's management team is embracing the opportunity to strengthen its leadership position, capture market share, and create a more dominant brand. Here's how McCormick is spearheading those efforts.

Culture is a big advantage

Noted American management consultant Peter Drucker may have summed it up best when he said, "Culture eats strategy for breakfast." McCormick has a people first culture which is helping it drive innovation through "continuous reinvention of [its] business." In April, CEO Lawrence Kurzius described the addition of innovation to the company's principles:

We've added driven to innovate. Innovation propels our business forward and maintains our competitive advantage. We have an unrelenting focus on what's next in science, technology, insights and winning ways of working. We're designing new solutions across all aspects of our business, from global supply chain to marketing, packaging and distribution.

The company and its employees also exhibit a passion for maintaining its rank as the undisputed leader by market share (20%) in the consumer-packaged retail and spices category, four times as large as its nearest competitor. 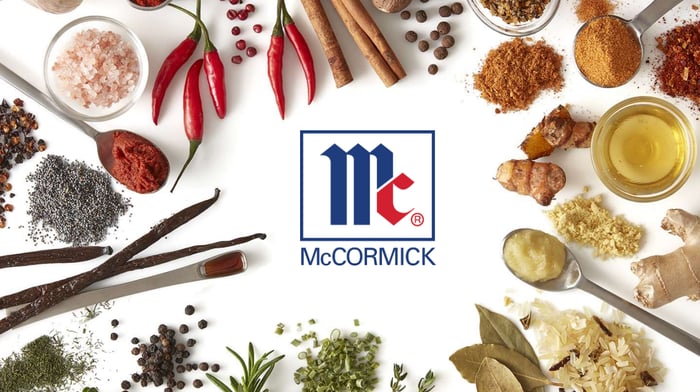 Strengthening its brand in the age of the internet

The company prides itself on its cutting edge digital marketing and in 2016 reached a new high in its marketing spend with 46% focused on digital advertising. That spend paid off around the world.

In the United States, the company's Everyday Purity ad campaign created 250 million digital impressions and 85 million video views resulting in a 2% increase in millennial households using McCormick products and a 15% purchase intent from millennials who had not previously purchased the company's products.

It received a top five ranking for the third year in a row from the L2 Digital IQ index of over 100 food companies.

More to it than just advertising

McCormick is doing a lot more to appeal to people's tastes than just advertising though. It's making more of its products gluten free and without GMOs. Here is how Kurzius put it:

Our consumers are increasingly interested in quality flavors with pure ingredients in their food. Our effort to increase our Organic and Non-GMO offerings proves that we are listening to consumers and are committed to continuing to evolve.

The company is also making great strides in making its packaging BPA free and recyclable, further examples of the company's ability to adapt its products to meet society's evolving demands.

Keeping products fresh longer and allowing consumers to grind their herbs at the table are two more innovations that McCormick has recently introduced through new packaging designs. Not only are consumers enjoying a better dining experience, the company is receiving recognition through a 2016 consumer product award for innovation and creativity from the Grocery Manufacturers Association.

The company has developed strategic relationships around the world to bring the finest herbs and spices to its customers while respecting the suppliers and protecting the local environment as well.

McCormick believes in supporting its ingredients at the source and as a result, creates health and education programs in developing countries to help the approximately 13,000 farmers who are at the center of its supply chain.

This commitment to the environment, the local farmers, and the sustainability of its strategic sourcing relationships is another aspect of the brand that is catching the attention of consumers as well as Corporate Knights, an organization focused on the intersection between media and society that looks at social, economic, and ecological benefits brought about by companies around the world. In 2017, Corporate Knights ranked McCormick 14 out of 4,000 companies and No. 1 in the food industry as one of the world's most sustainable companies.

This is a company that has all the attributes of a company with a competitive advantage that stems from its culture of innovation. Strategic relationships developed over decades, coupled with its ability to adapt to new consumer preferences puts this company in a position to succeed long-term.