While the FANG stocks are often grouped together because of how they’ve outperformed the market, one of them is vastly different from the others in very important ways.

"What is FANG doing today? Should I buy or sell FANG?"

These large-cap tech leaders are often grouped together because of their high growth rates, dominant brands, and out-performance: 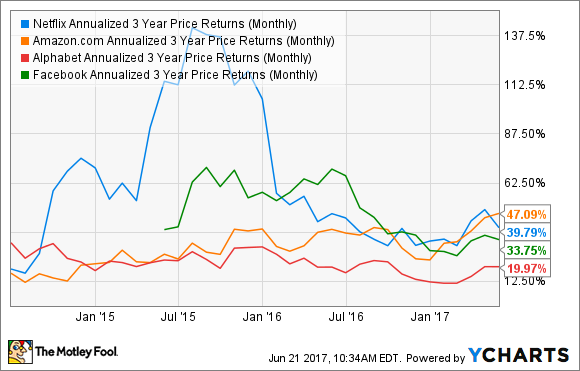 However, one FANG stock is very different from the others in ways investors need to know.

The outlier is Netflix.

For one, Netflix is far smaller than the other FANGs, with a market capitalization of $66 billion, well below third-most-valuable Facebook at $440 billion.

That means Netflix could potentially have the most upside. However, other characteristics point to much higher risk. 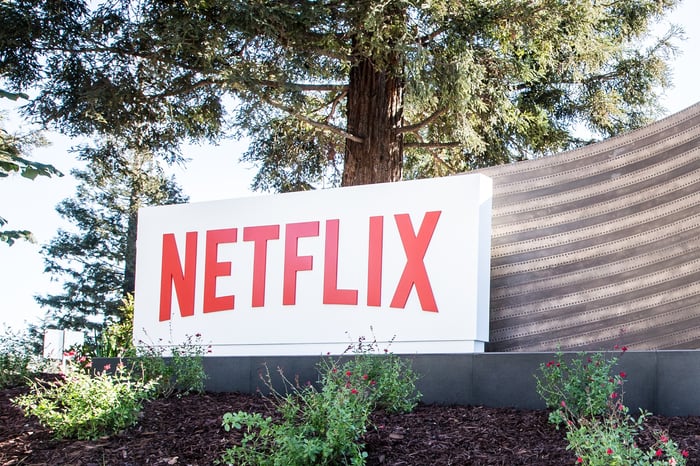 First, Netflix is not diversified. This is not necessarily bad -- a focused business model can eliminate distractions and help dominate a particular market niche. However, extreme focus presents risks should that core business falter. Currently, Netflix is a subscription entertainment service and nothing else.

In stark contrast, Amazon is known as "The Everything Store." It not only dominates online retail but also possesses the leading cloud platform, Amazon Web Services. With the acquisition of Whole Foods (NASDAQ: WFM) and rumors of a potential pharmacy business, there seems to be no industry Amazon can't attack -- including Netflix's. Netflix actually uses AWS for its infrastructure -- an interesting arrangement, considering Amazon is now chasing Netflix with its own Prime Video offering.

Alphabet has also diversified away from its core search business. The company acquired Youtube in 2006, built its own cloud business, and made several "Other Bets," including self-driving car platform Waymo, which some believe may be worth $70 billion.

While Facebook is the youngest FANG, it's also made a slew of acquisitions, including photo-sharing platform Instagram, messaging app WhatsApp, and virtual reality company Oculus Rift. While Facebook doesn't sell public cloud services like Amazon and Google, it does build its own data centers (instead of renting) and founded the Open Compute project in 2011, aimed at reducing future hardware costs.

Of course, someone might want to inform Reed that Starbucks (NASDAQ: SBUX) has made plenty of acquisitions over the years, including Teavana, La Boulange, Clover, Ethos Water, and others. Hmmm...

Netflix, while arguably the best entertainment company, is still just an entertainment company. That means it has to do the heavy lifting of creating great TV shows, then asking consumers for their subscription dollars. These shows are expensive -- Netflix plans to spend $6 billion on content this year, up from $5 billion in 2016.

While Alphabet and Facebook also produce "content" for which they earn advertising revenue, the content comes from you, the customer, based on what you search for, or what you post to your timeline (for free!).

Of course, Google and Facebook must supply technology and storage to support these dominant platforms, but these costs are minimal compared with producing "wow-factor" entertainment year in and year out (and Netflix has these other costs as well).

And though Amazon is more capital-intensive than Google or Facebook with its distribution network, it also doesn't produce the books, electronics, or clothing it sells (though with Prime Video and private-label, this is changing). Moreover, Amazon receives sales well before it has to pay suppliers -- which means it can use the extra cash in the meantime.

These business model differences show up in each company's free cash flow, with Netflix currently the only FANG operating in the red: 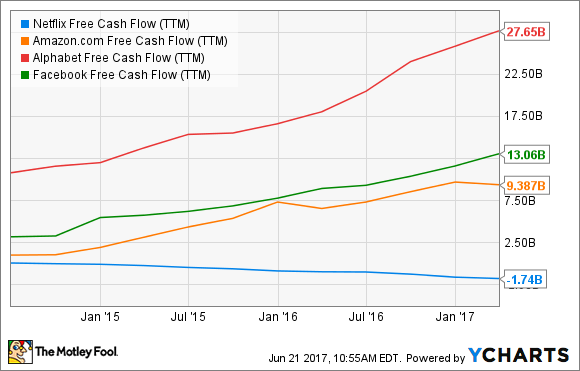 Negative cash flow means Netflix has to fund growth with debt, which makes things even more risky. Looking at net debt (so, negative numbers are good), Netflix is the only indebted FANG: 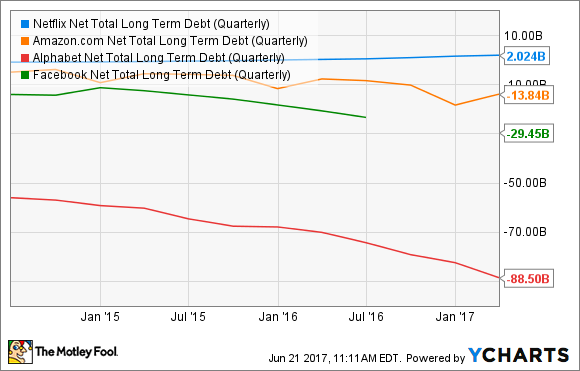 Of course, $2 billion in net debt isn't bad for a $66 billion company. Still, Netflix's balance sheet gives it less flexibility to make acquisitions, and less room for error should anything go wrong.

Netflix may still be a good investment today based on its large potential market; however, those looking for low-risk tech should be careful with the streaming giant. No diversification, negative free cash flow, and higher debt all make Netflix the least sure bet of all the FANGs.