Shares of Costco Wholesale Corporation (NASDAQ:COST) took a spill last month as the warehouse retailer was among a number of stocks that sold off following the news that Amazon.com, Inc. (NASDAQ:AMZN) would acquire  Whole Foods Market, Inc. (NASDAQ:WFM).

According to data from S&P Global Market Intelligence, Costco shares finished down 11%. The slide started on June 16 when the Amazon-Whole Foods deal was announced, as the chart below shows. 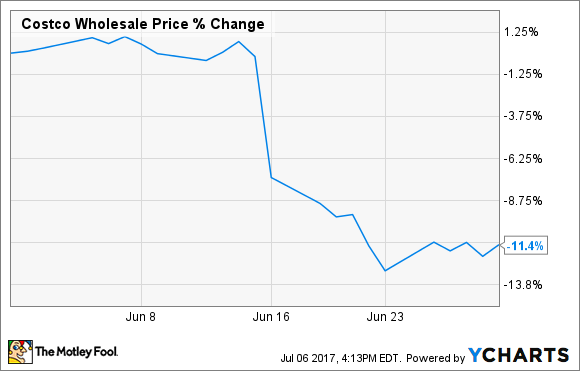 Food retailers sold off across the board after the deal was announced as the combination is seen as a threat to supermarket chains and other grocers as Amazon has long had its eye on grocery and Whole Foods gives it more than 400 stores and a strong brand to work with.

While its peers manage to recover some of those losses, Costco shares continued to fall as many observers see the company as a direct competitor with Amazon-Whole Foods as Amazon's Prime service offers a competing membership program and many of Whole Foods' stores are located in wealthy urban enclaves attracting similar customers to Costco.

Despite worries about Amazon, Costco's performance continues to be strong as the company just posted global comparable sales growth of 6.5% accounting for fuel prices and foreign exchange, with a 6.3% increase in the U.S.

Costco's membership model affords it some protection from Amazon as its financials won't immediately suffer since it makes most of its profits from membership fees. Its cheap prices and buy-in-bulk model also separate it from Amazon, which is unlikely to provide that option even with Whole Foods under its umbrella.

Still, increasing competition isn't a good thing for Costco. Whether it's affected by Amazon will depend on how the e-commerce giant leverages Whole Foods, such as lowering prices and improving delivery. Costco has succeeded thus far, but it may eventually have to adapt to the e-commerce era.