Venture capital-backed 3D printing companies Carbon and Desktop Metal are among the smartest companies in the world for 2017, according to MIT Technology Review, which recently released its annual list of the 50 companies that "best combine innovative technology with an effective business model."

Yes, that combo sounds like a recipe for long-term success, so investors in 3D Systems (NYSE:DDD) and Stratasys (NASDAQ:SSYS) -- neither of which made the list -- would be wise to keep an eye on these start-ups. Carbon began competing with the two 3D printing bigwigs last year, while Desktop Metal -- which has ties to Stratasys -- will become a competitor to 3D Systems when it launches its first metal 3D printer this fall. 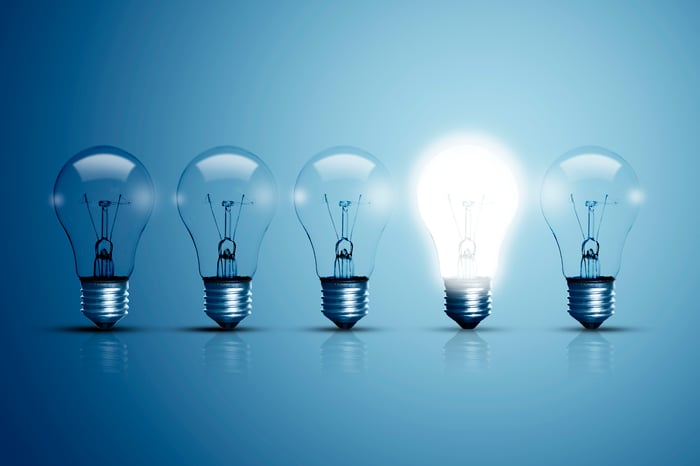 Why Carbon is among the smartest

Silicon Valley-based Carbon is making its second consecutive appearance on MIT Technology Review's smartest list, moving up to No. 18 from No. 32. The company received the honor because its "novel 3-D printing process makes it possible to fabricate parts out of a wide variety of plastics," according to the renowned tech publication.

Indeed, Carbon's Continuous Liquid Interface Production (CLIP) technology opens up a vast array of materials possibilities. Another notable advantage for the process is its speed, which is about 25 to 100 times faster than the leading polymer 3D printing technologies, according to the company. Materials limitations and slow speeds are among the major hurdles that have been holding 3D printing back from making more inroads into manufacturing. So it's not surprising that Carbon made a splash when co-founder and CEO Joseph DeSimone unveiled and demonstrated CLIP at the TED 2015 conference.

Unlike conventional 3D printing technologies, which print layer by layer, CLIP "grows" polymer parts continuously from a pool of liquid resin by harnessing ultraviolet light and oxygen. Eliminating the pauses between print layers is one major factor in CLIP's speed advantage. 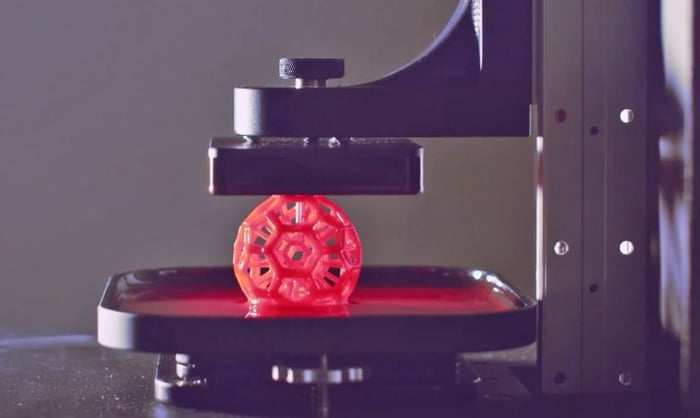 Carbon has been moving at the speed of light since 2015. It has amassed $221 million in funding from top venture capital firms and the VC arms of Alphabet, General Electric, and Autodesk. In April 2016, it launched its flagship 3D printer, the M1, followed in March of this year by the launch of the larger M2, along with its 3D-printing production platform called SpeedCell. The company has inked partnerships with Ford, Johnson & Johnson, BMW, UPS, and Adidas, with the latter announcing in April that it will be using Carbon's tech to make athletic shoes with 3D-printed midsoles for the mass market.

The publication didn't share what it found special about Carbon's business model, but I think its subscription-pricing model was probably a big factor. I've opined that this pricing model was a brilliant move because it should help expand the size of the 3D printing market. Not only does it cut down on a customer's initial capital outlay, but it should also help alleviate concerns about being stuck with pricey technology that could quickly become outdated.

Why Desktop Metal is among the brainiest

Ranking at No. 19, Desktop Metal, based in the Boston area, made its inaugural showing on MIT Technology Review's smartest list this year. The publication cited the following reason for including the start-up, which was founded in 2015: "With nearly $100 million from VC firms, GE, Alphabet, and others, this start-up is focused on cheap, fast 3-D printing of metal parts."

Desktop Metal's $97 million in funding should go a long way toward helping it gets its business (along with the industry's metal 3D printers) off the ground. In addition to the backers mentioned above, the company has also received investments from BMW, Lowe's, and Stratasys, which was an early investor, as I shared with Foolish readers in 2015. Stratasys strengthened its ties to Desktop Metal in May when it announced a strategic partnership that involves its distributors selling the start-up's 3D printers.

Today's metal 3D printers are large, slow, and extremely expensive, with most costing upward of a several hundred thousand dollars. These drawbacks have kept many entities on the sidelines with respect to 3D printing in metals. So Desktop Metal could expand the metal 3D printing market considerably if it succeeds at its goal of producing more affordable and speedier metal 3D printers that are office-friendly. 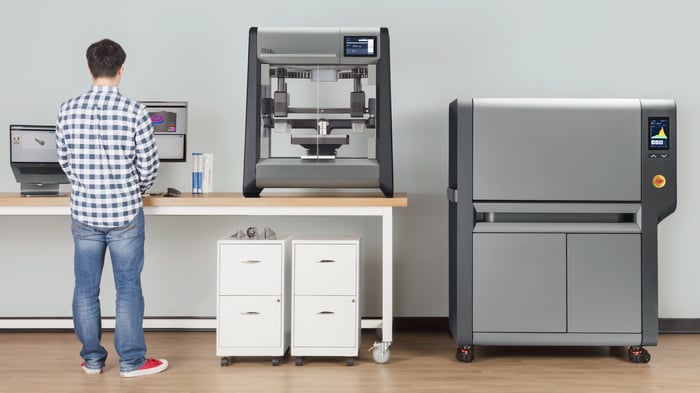 In April, Desktop Metal generated much buzz when it unveiled two metal 3D printing systems that it claims are faster and more cost-effective than those now on the market, and suited for an office environment. The DM Studio System, which includes a printer and sintering furnace, is priced at $120,000, and is slated to start shipping in September. It uses a proprietary technology that Desktop Metal calls Bound Metal Deposition (BMD). The DM Production System, which will cost $420,000, is expected to begin shipping next year, and is powered by a proprietary technology called Single Pass Jetting (SPJ). The company claims this system is 100 times faster than today's laser-based 3D printing systems. Taking a page from Carbon's playbook, the company has said that renting its systems will also be an option.

What this all means for 3D Systems and Stratasys

Carbon presents a notable competitive threat to 3D Systems, Stratasys, and other 3D printing companies in the polymer 3D printing space, as I've previously opined. Stratasys only makes polymer 3D printers, and they comprise the lion's share of 3D Systems' 3D printer business, though the company also makes metal 3D printers. Both companies also have sizable service operations. HP Inc., which entered the market last year, also has the potential to be a significant threat to the incumbent polymer players.

3D Systems has a weapon to fight back, though we don't yet know how successful it will be in the market. In March, the company announced that it recently shipped its first speedy 3D printing production platform, Figure 4, to a "Fortune 50 industrial company." Figure 4 is powered by a form of stereolithography (SLA) 3D printing technology, which is a photopolymerization tech that uses a light source to harden resin, just like Carbon's CLIP. 3D Systems touts Figure 4 as being more than 50 times faster than conventional SLA systems, and says it enables an immense array of materials possibilities. Moreover, Figure 4 is modular and fully automatable. Stratasys does not have a super-fast 3D printing technology.

Desktop Metal looks like it has the potential to be just as disruptive in the metals 3D printing space. This company presents a potential threat to 3D Systems, which makes laser-based metal 3D printers, though its metal business is small. Based upon exchanges on the company's quarterly conference calls, I think we safely surmise that its metals business accounts for less than 10% of its total revenue.

Investors in 3D Systems and Stratasys should focus on the companies' revenue and gross margins in their quarterly financial reports. Increased competition that's causing pricing pressure will negatively impact these numbers.