General Motors (NYSE:GM) said its sales in China rose 4.3% in June on strong growth in its SUV sales and the continued success of its Cadillac luxury brand.

It was a good result for GM as it continued its push to recover from a drop in sales of smaller vehicles early in 2017. Year to date, GM's sales in China are down about 2.5% this year. For comparison, rival Ford Motor Company's (NYSE:F) China sales were down about 7% over the same period, while sales of Volkswagen's (OTC:VWAGY) core VW brand were roughly flat in the first six months of 2017.

While the Chinese new-car market has been up and down over the last several quarters, demand for luxury vehicles has remained strong. Cadillac sales continue to lag those of the three big German luxury-car brands, but GM's luxury marque has been rapidly gaining ground. That trend continued in June: Sales rose 35% in June to 12,886 vehicles. 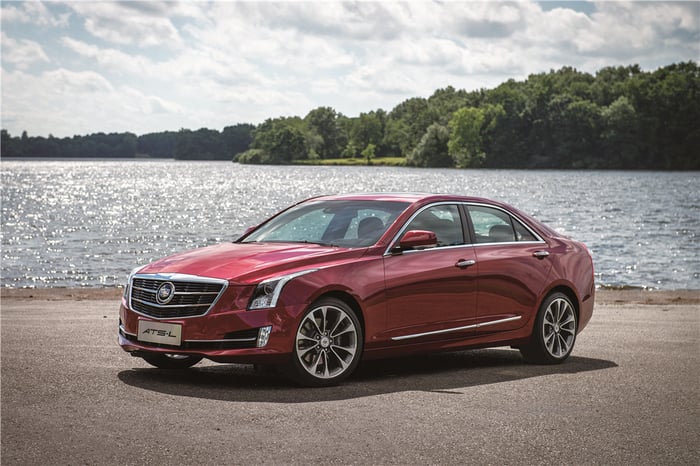 Shanghai GM builds a longer-wheelbase version of the small Cadillac ATS sedan, called the ATS-L. It has more room in the back seat than the regular ATS, a big selling point in China. Sales have been very good. Image source: General Motors.

That may not sound like much, but it's a lot for Cadillac. For comparison, the brand sold 12,580 vehicles in the U.S. last month. As in the U.S., the midsize XT5 crossover SUV is setting the pace, with nearly 5,000 sold. GM is also having success with a longer-wheelbase version of the compact ATS sedan (called the ATS-L) in China, and the big CT6 sedan, new last year, is drawing increasing interest.

Year to date, Cadillac's sales in China are up an impressive 75%.

How GM's other brands fared

Aside from Cadillac, the story for GM in China last month was a 42% year-over-year increase in sales of SUVs. GM may be losing small-vehicle sales to low-cost domestic Chinese alternatives, but it's making up for it with sales of higher-profit products. 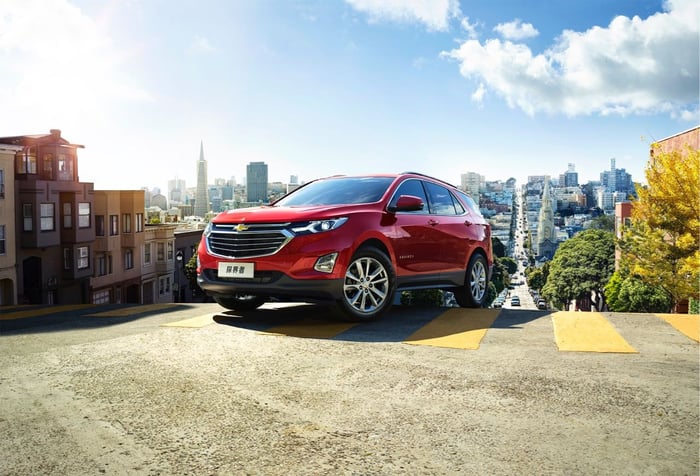 GM just launched the all-new 2018 Chevy Equinox crossover SUV in China. It has the potential to be a big hit. Image source: General Motors.

Buick is a super-popular brand in China, and it has been the biggest driver of GM's success in the world's largest car market. Buick sales rose 13% to almost 97,000 last month, a huge number driven by sales of four key models:

Chevrolet sales rose 7.2% from a year ago to 38,210 vehicles. The big news here is the debut of the all-new Equinox crossover SUV, which just began rolling out in China. The Equinox has the potential to be a huge hit for GM in China: It's off to a decent start, with over 5,400 sold in June.

The Baojun brand is GM's answer to low-cost domestic Chinese automakers. It offers affordable models aimed at young families that are backed by GM's solid standing as a global auto giant. It's a big seller, with 63,722 sold in June. Over 25,000 of those sales were of Baojun's 510, a recently introduced small crossover SUV. 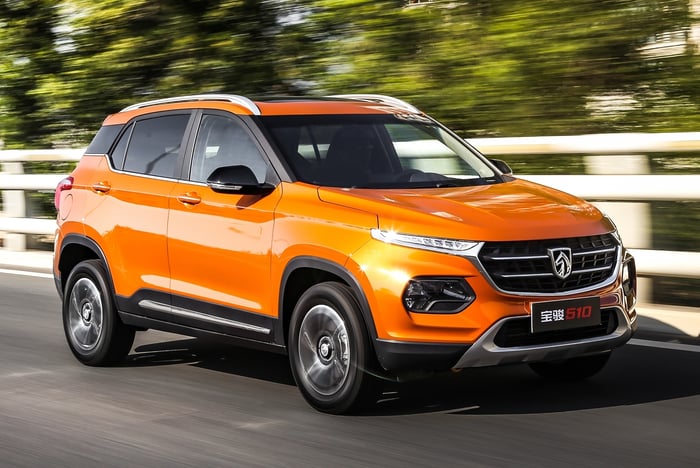 For years, GM's Wuling brand sold small, inexpensive commercial vans to Chinese tradespeople. Sales of those vans have declined substantially as China's construction boom has faded. In response, Wuling has shifted to emphasize sales of passenger versions of those vans under the Hong Guang nameplate.

Sales are still recovering -- Wuling sold 73,460 vehicles last month, down 26% from a year ago -- but the Hong Guang lineup sold over 30,000 units, a good showing. Wuling plans to launch an affordable SUV later this year to help boost sales further.

What it means for GM's second-quarter earnings

In the first quarter of 2017, GM's sales in China fell 5%. But its equity income from its joint ventures fell less than 3%, to $504 million, showing that GM was able to partially offset the financial impact of the sales decline with sales of higher-margin SUVs and luxury vehicles.

The story might be even better this time around, given that GM's sales rose slightly (about 0.6%) in the second quarter, and given that sales of high-profit SUVs and Cadillacs seem to be replacing lost sales of lower-profit small cars and crossovers.

Long story short: Look for GM's China income to come in above last year's $471 million when it reports second-quarter earnings on July 25.