This business offers investors the perfect combination of growth and safety.

As an investor in your 50s, you're likely looking to grow your nest egg so that it can help support you when you retire. You're probably also interested in building a passive income stream, ideally one that will grow over time.

Yet you've also worked hard for your money. You've spent decades working to amass your fortune, and you don't want to lose it by speculating on high-risk investments.

So what you, and many investors over 50 like you, are probably searching for is a stock that possesses a perfect blend of growth and safety. Well, you've come to the right place. Read on to learn about an excellent dividend growth stock that can provide you steadily rising income fueled by strong and reliable cash flows. 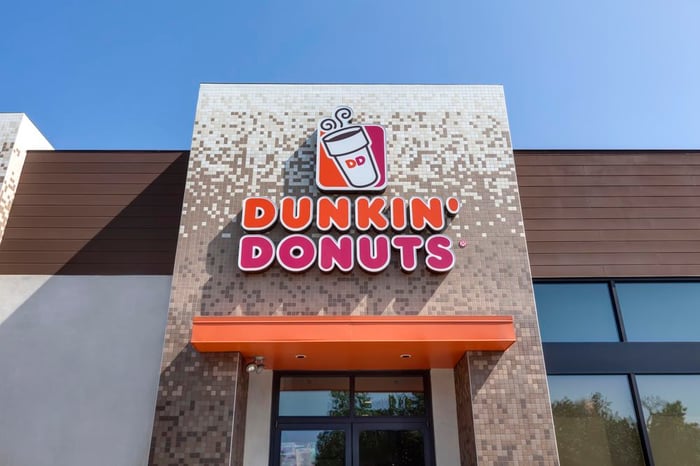 Despite their ubiquity, coffee shops in the U.S. and around the world still have room for significant growth. And while Starbucks (SBUX 1.66%) may be the first name that comes to mind when thinking about companies that could benefit from the world's love affair with coffee, its often-overlooked competitor -- Dunkin' Brands Group (DNKN) -- may have an even larger opportunity for expansion, particularly in the United States.

Reflecting this view, Dunkin' Brands believes it can eventually grow its Dunkin' Donuts store count to more than 17,000 U.S. locations, up from fewer than 9,000 at the end of the first quarter of 2017. That may come as a bit of a surprise if you live on the East Coast, where Dunkin' Donuts stores are common. But in most of the rest of the country, Dunkin' Donuts restaurants are much rarer; the company only has about 460 locations in its "West" market, an area that spans from the central U.S. to the West Coast and contains heavily populated states such as Texas and California. 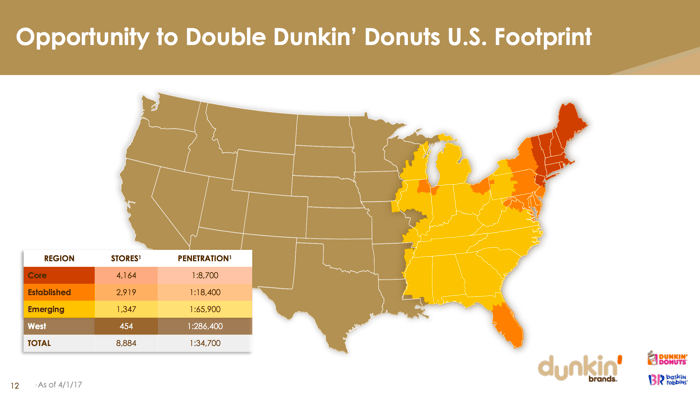 Moreover, Dunkin' Brands completed its transition to a 100% franchised restaurant operation in 2016. This should help to accelerate the company's expansion, as franchisees will be providing the majority of the capital to open new stores. Even better, Dunkin's capital-light franchise model produces a steadily rising stream of high-margin royalty and rental-income payments. In turn, the company passes on these recurring cash flows to shareholders in the form of stock buybacks and a growing dividend: 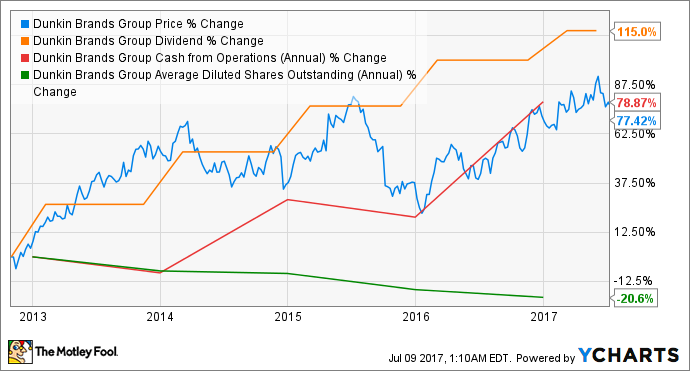 The key to smart development is franchisee profitability. If our franchisees are profitable, they will build more restaurants. It's as simple as that, and of course, that fuels Dunkin' brands earnings growth.

Notably, Dunkin' Brands is taking a page out of Starbucks' playbook and also expanding its business outside of its restaurants. Dunkin' Donuts is teaming up with Coca-Cola (KO -0.20%) to roll out a bottled line of ready-to-drink coffees to grocery stores, convenience stores, and other retailers nationwide. Coca-Cola will manufacture, distribute, and sell the product, thereby providing Dunkin' with a valuable distribution partner as it attempts to gain a beachhead in the $2.3 billion ready-to-drink coffee market.

Dunkin' Brands CEO Nigel Travis believes the partnership with Coca-Cola will "increase consumption of Dunkin' Donuts coffee and increase our brand relevance with existing and new consumers, including many younger customers." In turn, Travis expects it to drive incremental traffic to Dunkin' Donuts' restaurants. And as my colleague Dan Kline notes, this move is a direct shot at Starbucks, which previously was the sole restaurant brand of cold coffee drinks sold nationally in these stores.

All told, Dunkin' Brands gives its investors many ways to win. The company's core product -- coffee -- is habitually purchased and rather addictive. Its franchise model provides steady and reliable cash flows, while containing ample room for growth. A nascent business in consumer packaged goods provides an additional exciting growth driver. Throw in a solid 2.3% dividend yield, a low payout ratio (dividends comprise only about 55% of Dunkin's earnings), and an attractive valuation -- shares currently trade at about 21 times free cash flow -- and you have all the makings of a quality and relatively low-risk dividend growth stock.

It's the type of business that could fit well in a fifty-year-old investor's diversified portfolio, and a stock that could provide a caffeinated boost to your passive income stream in the years ahead.