Smart investors know that including defensive stocks such as Costco, Johnson & Johnson, and McDonald's in their portfolios can make a lot of sense.

Stock market losses are no laughing matter, and when the bear comes calling, you don't want to be caught flat-footed. To help keep that from happening, we asked our Motley Fool investors to share with us the stocks they think can best shrug off a market drop. They came back with Costco (COST -1.26%), Johnson & Johnson (JNJ 0.12%), and McDonald's (MCD 0.78%)

Here's why these companies might help you keep a smile on your face even if the market starts tumbling. 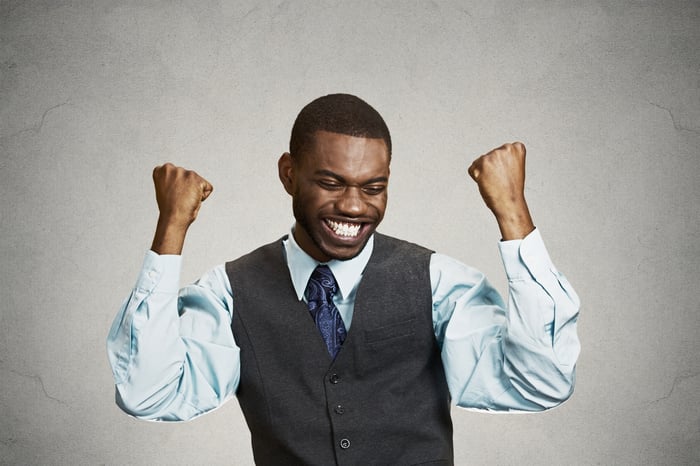 Demitri Kalogeropoulos (Costco): Costco's subscription-based business model delivers excellent protection against market slumps. In fiscal 2009, during the deepest part of the financial crisis, the warehouse giant endured just a 2% drop in comparable-store sales in the U.S. Overall, steady customer traffic meant that comps slipped by less than 1% after accounting for foreign currency swings.

Through it all, the company continued adding new subscribers, and its cardholder base rose to 56 million, from 53.5 million in the prior year. That success helped membership fees, the company's main source of profits, inch higher even as many retailing peers were reeling from losses.

Costco's business also bounced back quickly. By fiscal 2010, net income had rebounded to $1.3 billion from the $1 billion low it suffered during the global market slump. Today, that figure is comfortably above $2 billion. 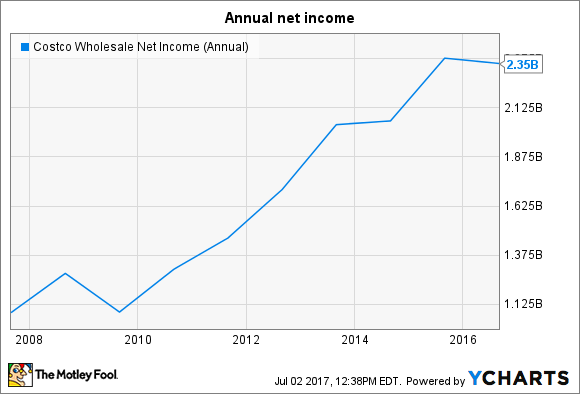 The good news for income investors is that dividend growth never let up. In fact, the dividend was raised by double digits in 2008, 2009, and 2010. That steady path was probably a consequence of the company's conservative payout policy that limits cash returns to less than one-third of earnings.

Income investors might be turned off by such a small payout ratio, especially given that Costco's stock yields below 1.5% today. However, add the special dividends the company has sent shareholders over the past six years, totaling over $8 billion, and it's clear that management aims to deliver all excess cash back to its investors over time.

Todd Campbell (Johnson & Johnson): In the past, Johnson & Johnson's been the poster child of a steady-eddy investment when markets have soured, and as a result, it's one of my top picks for investors who are nervous about a stock market crash. 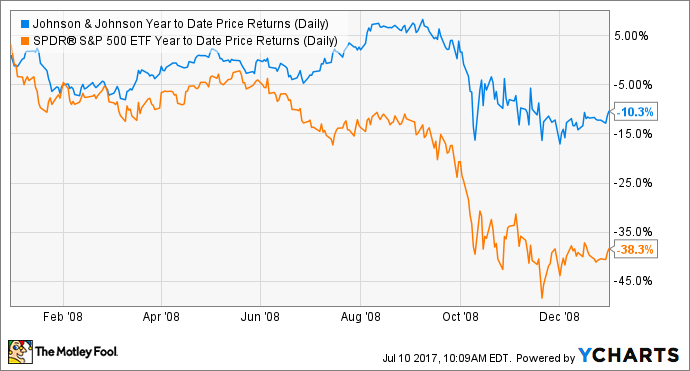 Of course, there's no guarantee of a repeat performance the next time the market tumbles, but there's reason to think J&J could still provide "port-in-the-storm" safety in the future.

It makes its money selling must-have products, such as over-the-counter pain relievers and life-saving cancer drugs. Over 40% of its sales come from pharmaceuticals used to treat everything from mental disorders to HIV. It also generates about $6 billion per quarter from products used in surgeries.

Altogether, J&J's consumer goods, pharmaceuticals, and medical device businesses generate $18 billion in revenue and $4.4 in net earnings per quarter. In short, it's a cash flow-generating machine that's more than capable of rewarding investors with a steady flow of ever-increasing dividends. In fact, J&J has boosted its dividend payout to investors for 55 consecutive years.

Sure, there are faster-growing stocks investors can buy, but if you're most concerned with consistency, and pocketing dividend income along the way, then it's hard to argue against defending yourself from a market downturn by owning J&J shares.

Look for gold under the Golden Arches

Dan Caplinger (McDonald's): Most market crashes come from slowing economic conditions, and for the vast majority of stocks, a weakening economy means declining growth in sales and profits. McDonald's has been an exception to that rule in the past, because its value-oriented strategy in providing fast food to customers at low prices becomes even more appealing when times get tough.

As an example, consider the 2008 recession. The stock market posted huge declines that year, as the financial crisis led to widespread panic and dramatic impacts on consumer confidence. But McDonald's defied the recession, boosting comparable-restaurant sales as cash-strapped customers came flooding in to take advantage of its value food offerings. Higher-end restaurant stocks faced huge difficulties, but the Golden Arches were able to capitalize and lure new customers into its doors. As a result, McDonald's stock was one of the few gainers among major blue-chip companies, posting about a 6% rise.

Market crashes don't always accompany economic recessions, and that means that there is some risk for McDonald's in a potential future market downturn. Having gained almost 70% in just two years, McDonald's also has room for a correction of its own. But if the next market crash comes from renewed concerns about consumers, McDonald's might well have the last laugh.