The cigarette industry has faced a long secular decline in demand as smokers gravitate away from the habit and send shipment volumes downward. It's therefore somewhat surprising to see that Philip Morris International (NYSE:PM) has been able to post such impressive gains so far this year, with the stock rising more than 30% as of early July. There are three main factors that have helped to lift Philip Morris' shares in 2017, and investors are hopeful that those positive impacts could continue, and carry the stock even higher in the months to come. 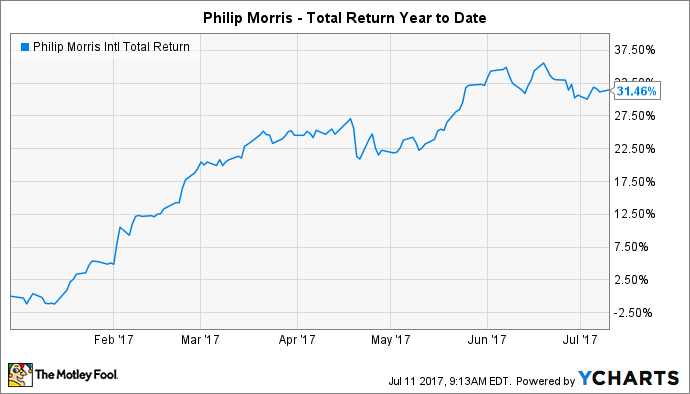 1. The dollar's strength has given way to weakening.

Philip Morris does all of its business overseas, so it relies on the strength of the foreign currencies it receives as revenue. When the U.S. dollar is strong compared to those foreign currencies, as it has been in recent years, Philip Morris struggles to produce much of any revenue growth, and profits often take a huge hit. Philip Morris has at times seen as much as a fifth of its prospective earnings disappear because of adverse currency impacts in recent periods, and that took away a lot of the company's forward momentum.

So far in 2017, the dollar has been weak. Declines against major currencies like the Japanese yen and euro represent big boons for Philip Morris in important markets for the tobacco giant. The dollar hasn't been weak against every foreign currency, but even a pause in its strengthening has had a positive impact in terms of year-over-year comparisons. If the current trends continue, then Philip Morris could finally start seeing additions to earnings due to currency impacts, and that would be a welcome change from what the company has suffered over the past several years.

Over the past couple of years, Philip Morris has moved away from its previously generous dividend growth policy. Dividend increases of 10% or more were common in the early years of Philip Morris' existence as a separate publicly traded company, but the days of double-digit percentage dividend growth went away when the company ran into the currency headwinds described above. The result was decelerating gains in its quarterly payouts, with a 6% rise in 2014 and 2% increases in 2015 and 2016.

Given that Philip Morris has just started to see some potential tailwinds for earnings growth, it would be surprising for Philip Morris to make a big boost to its quarterly dividend in September, when it has traditionally announced its annual dividend increase for the year. Yet hopes are higher for 2018, when a full year of more favorable earnings could give Philip Morris the margin of safety it needs to push its dividend higher at a healthier clip.

Philip Morris has been adamant in its belief that reduced-risk products will eventually replace traditional cigarettes, and that controversial stance has made it all the more important that it generate good results on its product pipeline. The iQOS heated-tobacco system has done extremely well in test markets, exceeding expectations by making a huge dent in the market share that traditional cigarette makers have enjoyed in areas like Japan. Philip Morris is pushing harder into other markets globally in the hope that it can match its Japanese success elsewhere.

The most important strategic goal for Philip Morris and iQOS is its application with the U.S. Food and Drug Administration to get approval to sell the heated-tobacco product as a modified-risk tobacco product in the U.S. market. FDA approval would not only open the market to iQOS, but also send a clear message to other regulators across the globe that heated tobacco is a viable alternative to traditional cigarettes. Investors hope that Philip Morris' first-mover advantage in that case would give it lasting benefits over its competitors.

Greater than 30% gains in Philip Morris International stock so far in 2017 are a nice bonus for shareholders, but the real growth in the stock could be yet to come. Investors will have to see whether the positive trends helping Philip Morris will continue and pay off with even greater rewards in the future.