It might seem on the surface that Activision Blizzard's (NASDAQ:ATVI) best-selling Call of Duty franchise is in trouble given the poor sales performance of the latest installment, Infinite Warfare, which took the popular shooter to a futuristic place fans didn't recognize. Fear not: The Call of Duty brand is alive and kicking.

Here are three growth initiatives Activision Blizzard has planned for the franchise that should grow the Call of Duty brand and potentially help it reach new audiences. 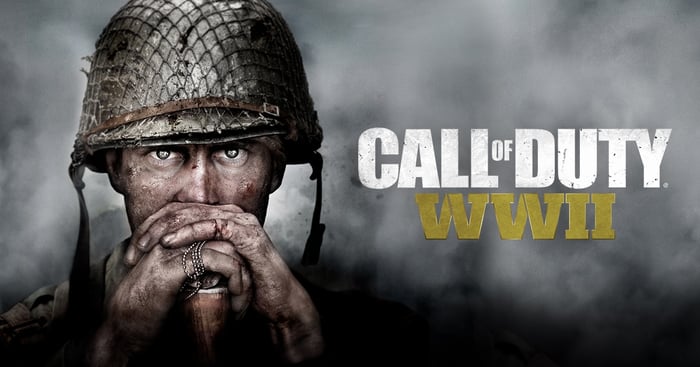 Activision's upcoming Call of Duty: World War II could be the best-selling title in the franchise's history. Image source: CallOfDuty.com.

1. Call of Duty: World War II is generating a lot of buzz

The upcoming Call of Duty: World War II is taking the series back to its roots, thrusting players into a cinematic story beginning with the storming of the beaches of Normandy on D-Day.

The first Call of Duty games, released from 2003 to 2005, were also based on WWII and allowed players to play through D-Day. But that was 12 years ago, and console/PC graphics hardware has advanced much further than the Xbox 360 era.

Activision has also gotten much better at storytelling with its Call of Duty games. In recent years, the single-player story has taken on the look and feel of a Michael Bay movie. The reputation Activision has gained for its action-packed scenes in Call of Duty games has fans of the franchise buzzing with anticipation for the game's return to a historical setting. Pre-order trends, along with YouTube trailer views, point to Call of Duty: World War II returning the franchise to growth when it hits digital store shelves in November 2017.

2. Activision's King is working on a new Call of Duty mobile game

If the new Call of Duty mobile game is indeed "fresh" and "redefines" the genre, as described on King's website, this could easily be one of the top-grossing games on mobile. Generally, when you look at the top sales charts on Apple's App Store, for example, you see a lot of cute, casual games, including King's Candy Crush, but no first-person shooters, which tend to attract hardcore gamers.

Given the popularity of the first-person shooter genre on console and PC, and the improving graphics power of mobile devices, it's only a matter of time before a first-person shooter comes out of nowhere and dominates the mobile game sales charts. It very well could be a Call of Duty game.

3. A new Call of Duty universe is planned for the silver screen

As with Activision's ambitious goals with esports, Activision Blizzard Studios is not just creating another cheesy video game movie (there have been a lot of those over the years). Instead, management is planning a "robust cinematic universe" -- a universe van Dyk compared to Disney's Marvel, in an interview this year with The Guardian:

It's going to have the same sort of high-adrenaline, high-energy aesthetic as the game, but it's not a literal adaptation. It's a much more broad and inclusive, global in scope ... a big, tentpole Marvel-esque movie.

Van Dyk and Sher also told The Guardian that several scripts have been planned and the first installment could release within a few years.

This is not going to be another Warcraft, Activision's recent game-to-movie adaptation of its World of Warcraft franchise, which didn't perform nearly as well as the typical Marvel movie. Warcraft was licensed out to a third-party studio. The Call of Duty movie is being made in-house under Activision's control, which is the right move and could make the Call of Duty movie a real winner.

Call of Duty is not done growing

All together, these initiatives are designed to not only grow the installed base of players for Call of Duty, but also diversify the company's revenue to consumer product lines to create a global interactive entertainment powerhouse based on its popular video game franchises.