Chipzilla has execution issues, it's being overtaken by competition, and it keeps taking its eye off the ball.

Just over a year ago, I argued that it may be time for chip giant Intel (INTC 0.84%) to replace its CEO. At the time, I pointed to the company's lost leadership position with respect to chip manufacturing technology, the company's failed efforts in the mobile computing market, and relatively poor stock price performance as key reasons for the company and its board of directors to put somebody new at the top.

I was genuinely hoping -- both as an Intel stockholder and as somebody who has long admired the company -- that I'd be proven wrong about those issues. Unfortunately, as things have played out over the last year, I don't think those complaints were misplaced. In fact, I think that the situation, in some respects, has gotten worse.

With that in mind, here are three signs that Intel needs new management.

As of last year, Intel made it plain that it expected to be shipping -- in rather high volumes, I might add -- products built on its 10-nanometer chip manufacturing technology during the second half of 2017.

That timeline already represented a significant delay from the company's original schedule and was supremely disappointing, but it was what it was.

Now, it would seem, Intel experienced yet another significant delay in rolling out those first 10-nanometer chips. Recent reports from both DIGITIMES and FanlessTech suggest that Intel's launch schedule for these processors -- which were originally targeted to launch in 2016 -- is now more like the middle of 2018.

A nearly two-year delay in a processor product, especially given that product cycles in this industry are about a year long, is unacceptable and represents complete and utter failure by Intel's chip manufacturing division.

That failure is compounded by the fact that Intel's main competitors seem to be delivering new manufacturing technologies on schedule, which has allowed them to effectively close the gap in terms of technology.

Going from first to second

Intel had long been the most valuable chip company traded on the U.S. stock exchanges, being only briefly eclipsed by other chipmakers at times.

However, a while back contract chip manufacturer Taiwan Semiconductor Manufacturing Company (TSM 0.79%) edged out Intel in terms of market capitalization, and the gap seems to have even widened since the initial crossover.

As of a recent check, TSMC's market capitalization sat at $182 billion, while Intel's was around $161 billion. 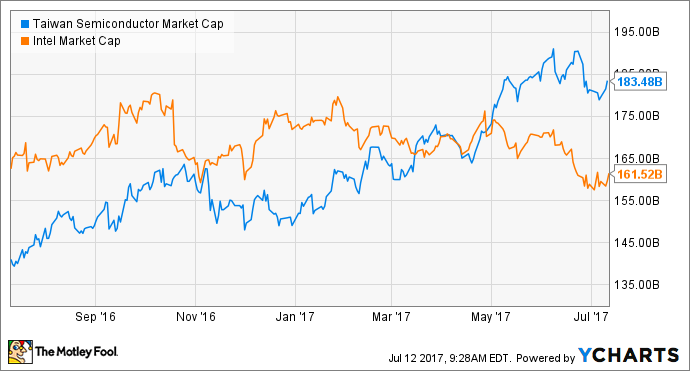 Considering that Intel routinely touts the advantages of being an integrated device manufacturer (IDM), the fact that it is now less valuable than a contract chip manufacturer has got to be a pretty serious blow (just recall the Intel executive who infamously declared five years ago that the fabless/foundry business model was "collapsing").

Either Intel's fundamental business model/strategy is the wrong one, or Intel is simply doing a poor job of reaping the potential benefits of its business model. Neither case makes current Intel management look good.

In my view, Intel must do serious work to shore up its execution in its core business. As the company's core business faces substantial threats, Intel is out making large acquisitions -- such as its $16.7 billion purchase of programmable logic maker Altera and its pending $15.3 billion acquisition of computer vision specialist Mobileye (MBLY).

These acquisitions seem to be indicative of an upper management team that's desperate to find new avenues of growth as its organic growth efforts sputter.

Buying incremental growth is an OK strategy as long as the core business is rock solid, but given that Intel's core competitive positioning in PC processors, data center processors, and chip manufacturing technology seems to be eroding (due significantly to Intel's poor execution), the timing of such purchases may not have been particularly prudent.