Scientists like to joke that realizing the promise of nanotechnology has been five years away for the last 35 years. That would imply that there isn't a single nanotech stock available to investors. But while we don't yet have quantum lightbulbs or graphene-based water desalination, this list of nanotechnology stocks proves that nanotech products actually touch our lives every day:

You may not think "nanotech" when you see the big names in the list above, but a closer look reveals how they're leading the evolution of the field. 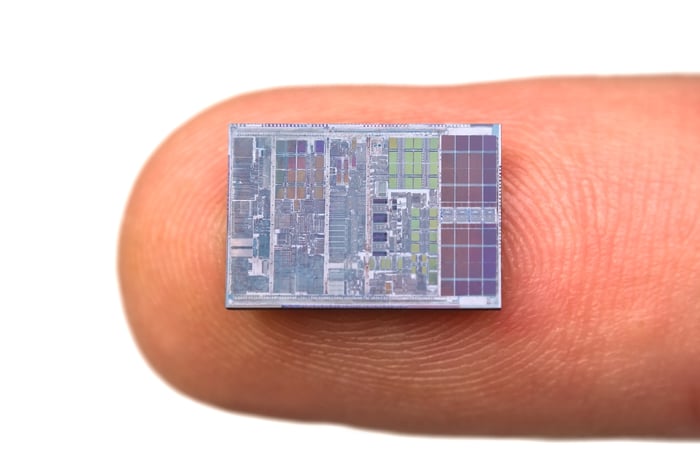 Is nanotechnology the future?

First, let's start with a simple question investors might want to ask: What is a nanomaterial? There's no universally accepted definition, but regulators around the world have generally defined a nanomaterial as a product that (1) has at least one dimension of 100 nanometers or smaller and (2) gains unique properties from that dimension. The second part of the definition is often forgotten, but it's what gives such tremendous potential to nanotechnology.

Some materials become more magnetic or better able to kill pathogens at the nanoscale, while others can access different physical phases entirely. It all depends on the material, which is what guides applications and product development for the top nanotechnology stocks.

All that research and development needs equipment, reagents, and services -- all of which are provided by Thermo Fisher Scientific. The company is most closely associated with life-sciences research, a growing area of the nanotechnology field. Whether enhancing MRI contrast agents or using DNA origami to build nanostructures that deliver therapeutics to specific locations in the body, the company has played a pivotal role spurring innovation from the earliest stages of research. 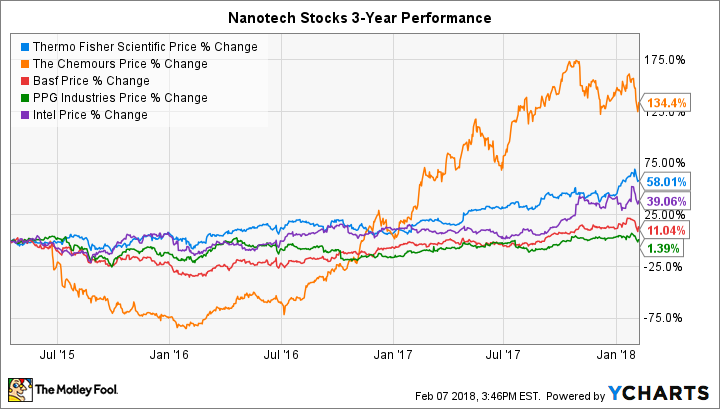 In Sept. 2016 Thermo Fisher Scientific boosted its ability to serve the nanotechnology field by acquiring FEI Company for $4.2 billion, incorporating high-powered transmission electron microscopes (TEM) -- the only way to image nanomaterials such as metals, living cells, and semiconductors -- into its expanding empire of analytical lab services. In case investors are wondering how it's going, the segment's sales jumped 31% in 2017 to $4.8 billion.

Nanomaterials behind the scenes

Of course, the point of R&D is to turn discoveries in the lab into real products. How else would companies make money from nanotech? It may not always be obvious, but you use products enhanced with nanomaterials each and every day. Here are a few examples:

Nanotechnology isn't usually associated with these businesses -- it's just part of the table stakes for competing in today's coatings and microchip industries -- and doesn't comprise a majority of product sales for most companies. Chemours Co. may be the sole exception, as it derived 43% of total sales last year from titanium dioxide, and another 42% from fluoroproducts such as nonstick Teflon coatings -- although those happen to be at the center of serious questions about their impacts on human and environmental health.

That said, these nanotech companies have the size and financial flexibility to make big moves quickly, should major advances allow the field of nanotechnology to deliver on its science-fiction-like potential.