Beverage giant Coca-Cola (NYSE:KO) has been criticized for what some call a lack of ambition when it comes to bottling innovation. Recently the internet's fury has descended on the brand for its commitment to use "only" 50% recycled materials. In the past, the market-first PlantBottle packaging option was in the cross hairs because it contained "only" up to 30% plant-based materials. The simple, unfortunate reality is that there are practical limitations to what the company can do with the other 70% of packaging materials.

For the time being, anyway.

DuPont (NYSE:DD) sees an opportunity to increase the amount of renewable material in plastic bottles by targeting the other 70% of materials. How? Together with agribusiness leader Archer Daniels Midland (NYSE:ADM), it expects to launch a new bio-based material on the market derived from one of 12 value-added, bio-based building block chemicals identified by the U.S. Department of Energy for their paramount importance to American manufacturing.

I recently traveled to the BIO World Congress on Industrial Biotechnology in Montreal, where I caught up with DuPont Industrial Biosciences Global Business Director of Biomaterials Dr. Michael Saltzberg to discuss the opportunity. Here's what I learned. 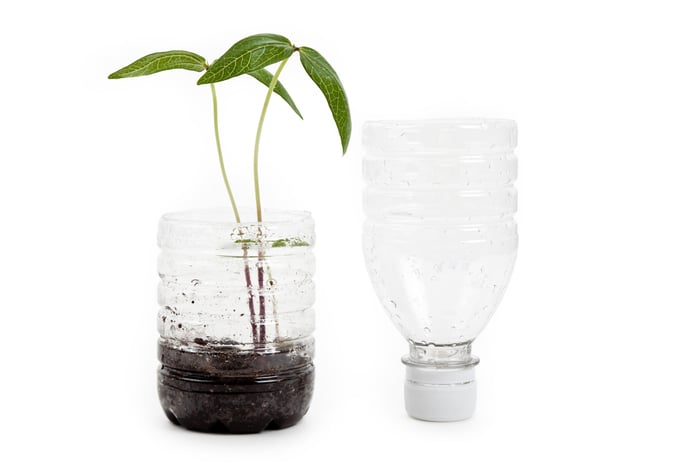 The technology at a glance

Most people don't associate DuPont with renewable materials, but it has quietly been a leading technology developer since forming the Industrial Biosciences division in 2011 after acquiring Genencor. It even owns perhaps the most successful industrial biotech platform on the planet, which brings in roughly $300 million annually for the company's Sorona brand of fibers for carpets and apparel. Despite all the hype, Silicon Valley has yet to match that level of performance.

DuPont Sorona highlights an important requirement for biomaterials: the green premium is nice to have (and smaller than you think), but at the end of the day, the product needs to deliver on performance. For example, carpets with Sorona fibers contain a certain percentage of bio-based material, which is nice to have. But they also deliver unique characteristics like odor fighting and stain resistance that consumers want. That summarizes the company's approach to biomaterials development -- and explains its next big idea. 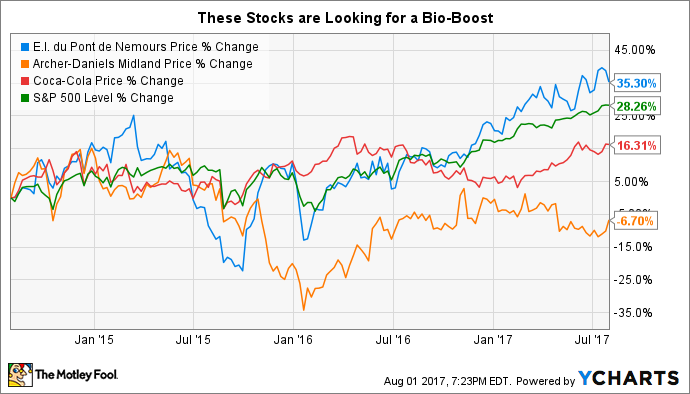 Together with Archer Daniels Midland, DuPont is developing a process that takes sugar from corn and biomass and converts it into a building block chemical called FDCA. It can be converted into an array of high value chemicals that are 100% biobased and represents a true "game changing" technology platform.

One such high value chemical is a plastic called PTF. If we put the alphabet soup of chemistry acronyms aside for a moment, then all investors need to know is this: the new chemical product provides a better barrier to gases than petroleum-based plastics used today. That means it could greatly increase the shelf-life of carbonated beverages (the performance-based value-add), while allowing companies such as Coca-Cola to create 100% renewable packaging (nice to have).

How could it help to increase the biobased content of Coca-Cola's PlantBottle? Your Coke bottle today is comprised of a material called PET that is made 30% from a plant-based material known as MEG and 70% from a petroleum-derived material called PTA. Archer Daniels Midland and DuPont want to replace PTA -- "the other 70% -- with its bio-based PTF, thus making it technically and economically possible to create a plastic bottle that is truly 100% renewable and doesn't compromise on performance. In fact, it could deliver characteristics that current petroleum-based materials don't.

Coca-Cola is developing its own 100% renewable materials PlantBottle, but that really just means it's relying on outside companies to manufacture novel materials. Given the rapid progress in the space from manufacturing giants such as Archer Daniels Midland and DuPont, the consumer brand giant may find it easier to switch -- if it isn't already working with the pair.

Of course, with an opportunity as large as this, it makes sense that several companies are racing to develop bio-based FDCA and convert it into chemical products that can take aim at PTA. For instance, BASF and Avantium are working to develop something called PEF, which has similar properties to PTF. Either way, DuPont feels confident that its own efforts will result in a windfall measured in the hundreds of millions of dollars within the next several years.

In other words, DuPont's biomaterials strategy will continue to deliver value for shareholders and the environment. And Silicon Valley is about to find itself even further behind.