Please ensure Javascript is enabled for purposes of website accessibility
Free Article Join Over 1 Million Premium Members And Get More In-Depth Stock Guidance and Research
By Maxx Chatsko - Nov 2, 2019 at 9:05AM

Cities and countries around the globe are outlawing wasteful plastic products and promising to hold manufacturers accountable. That creates risks and opportunities for investors.

In the time it took to write this article, an estimated 282,720 kilograms of plastic waste entered the world's oceans, according to The Ocean Cleanup. Much of that comes from Asian nations that are populous and lack collection and recycling infrastructure. To be fair, even those with that infrastructure in place have abysmal recycling rates. Canada only recycles 10% of its plastic consumption, while China's 2018 ban on importing recyclable raw materials means the United States incinerates much of its "recycled" plastic.

The global economy can certainly do more to increase access to recycling infrastructure, especially for developing nations, but many nations have begun asking a simple question: Do we really need to rely so heavily on single-use plastics? Often, the answer is a resounding "no."

That led to 180 countries reaching an agreement to reduce plastic waste, including single-use plastic bans in Canada and the European Union that could go into effect in 2021. And even without outright bans, many consumer-focused companies are turning to sustainable packaging for their products. That creates risks and opportunities for individual investors. 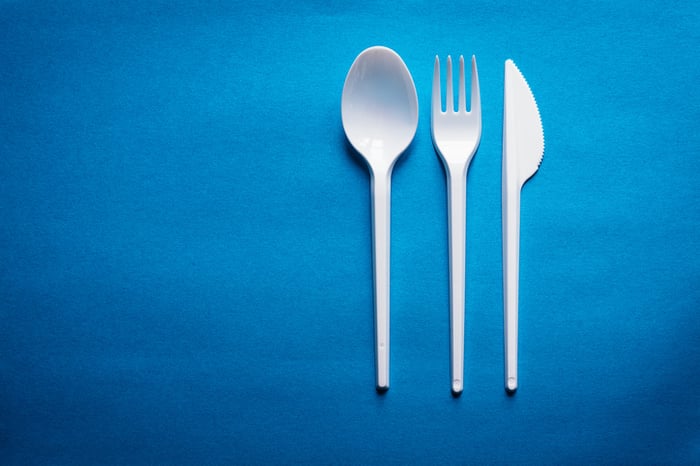 Thanks to the emergence of renewable and reusable packaging solutions and innovations in biomaterials, a growing number of cities, countries, and consumer-focused companies have been able to ban or reduce single-use plastics. For example, legislation being hammered out in the European Union proposes bans for products with readily available alternatives (such as plastic cutlery and straws) and reductions of 25% for products with no reasonable alternatives (such as food containers with special coatings).

That creates obvious opportunities for companies manufacturing alternative packaging solutions. For example, paper and cardboard producer WestRock ( WRK -0.47% ) has been working with customers eager to stay ahead of single-use plastic bans. From replacing plastic shrink-wrap for beverages to providing all the packaging for Walmart's new budget razor brand, WestRock has racked up a number of successes recently.

The business previously expected to have an annual run rate of $100 million in incremental revenue from plastic replacement by the end of September 2019. That's a drop in the bucket for a company with $18 billion in annual revenue, but the opportunity is just emerging, and WestRock is well-positioned to capture significantly more value from it.

Customers willing and able to switch to paper-based packaging are low-hanging fruit. Going further, WestRock has pioneered several engineered solutions aimed at bringing about a circular economy. Consider the grease- and oil-resistant EnShield Natural Kraft material. It's a perfect substitute for food and beverage containers that require smooth polyethylene coatings on the inside -- which can also pose a headache during recycling -- such as ice cream containers, coffee cups, or other materials the EU currently says have "no alternatives." 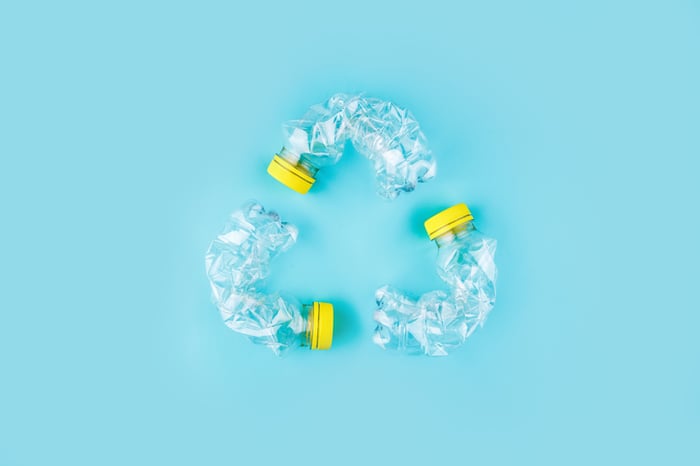 The legislation being finalized in the European Union also takes aim at reducing specific sources of plastic waste. For example, cigarette filters must reach a 50% reduction in plastic content by 2025, and 80% by 2030. Similarly, there's a goal to collect 90% of plastic bottles by 2025 -- and language suggesting manufacturers could be liable for plastic waste.

The promise to make plastic-bottle manufacturers more responsible for plastic waste increases the pressure on companies such as Coca-Cola ( KO 0.89% ) and PepsiCo ( PEP 2.55% ) to invest in recycling efforts. It makes sense: If there's more demand for recycled material in the supply chains of companies, that will create a higher demand for collection. Both businesses are already making significant efforts.

For example, Coca-Cola has a long-term strategy called World Without Waste. This vision has allowed the company to sell the idea of investing in advanced recycling technologies to shareholders. The beverage colossus is working to speed the development and deployment of a process that can convert recycled polyethylene terephthalate (PET), the most common polymer used in food packaging, into food-grade PET pellets without degrading the recycled material. In other words, it would create a closed loop for PET supply chains.

PepsiCo is also eager to reduce its contributions to global plastic waste as part of its sustainability efforts. It took the unusual step of issuing $1 billion in green bonds to raise funds for three sustainability goals, including its most ambitious project: sustainable plastics and packaging. The food and beverage giant is working to reduce its virgin plastic content 35% by 2025 through the purchase of recycled materials and bio-based plastics. The company will increase its use of biodegradable plastics as well.

At first glance, the sustainability efforts of Coca-Cola and PepsiCo may not move the needle much in terms of the investment case, but avoiding potentially costly future penalties is worth taking into account. Similarly, the food behemoths are investing in novel bio-based polymers that could create value worth paying attention to, but those projects have their own unique risks and opportunities.

Will Climate Change End Growth for Nike and Coca-Cola?

Hollywood Clashes With GMOs and Monsanto