The move could clear the way for Office Depot to strengthen its retail presence.

Office Depot (ODP -0.30%) should be very happy its rival Staples (SPLS) is being acquired by private equity firm Sycamore Partners in a $6.9 billion deal. The retail landscape is obviously no longer the same as it once was, and the U.S. Department of Justice really bungled the opportunity to bring some clarity to the industry when it squashed the merger of the two competitors.

Yet the plans Sycamore holds for Staples once it's taken private suggest that Office Depot may finally be able to not only survive on its own, but thrive. 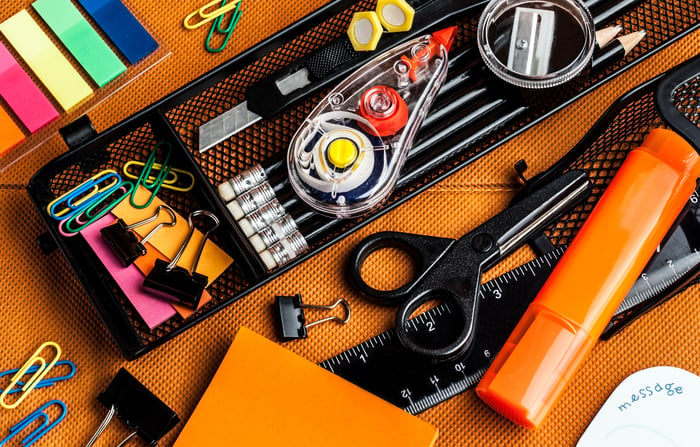 Papering over the competitive threat

Like many retailers today, Staples and Office Depot found themselves over-stored. As brick-and-mortar rivals like Wal-Mart and Costco threatened them on one side, Amazon.com (AMZN 3.53%) and other e-commerce suppliers attacked on the other. To improve its competitive response, Staples sought to merge with Office Depot in a $6.3 billion bid to create a single national office-supplies retailer.

However, the federal government objected. Whatever the merits of the merger were on the retail level, trade regulators were more concerned about the commercial contract market from which Staples and Office Depot each derived about 40% of their revenues. They said the former held a 47% share of the business-to-business market for Fortune 100 companies, while the latter owned 32%; the government worried that giant global corporations might end up paying more for paper, pens, and ink if the merger went through, even though 99% of customers wouldn't be affected.

The Federal Trade Commission sued to block the merger and the district court judge hearing the case agreed, siding with the government's argument that Amazon, in particular, wasn't a worrisome competitor.

The collapse of the merger doomed Staples and Office Depot to mediocrity and bleak financial outlooks. Last year Staples' sales fell 3%, while adjusted operating earnings fell 4% from the year-ago period. It sold its retail business in the U.K., as well as its European operations; saw its contract business sales go flat; and closed 48 stores in North America. 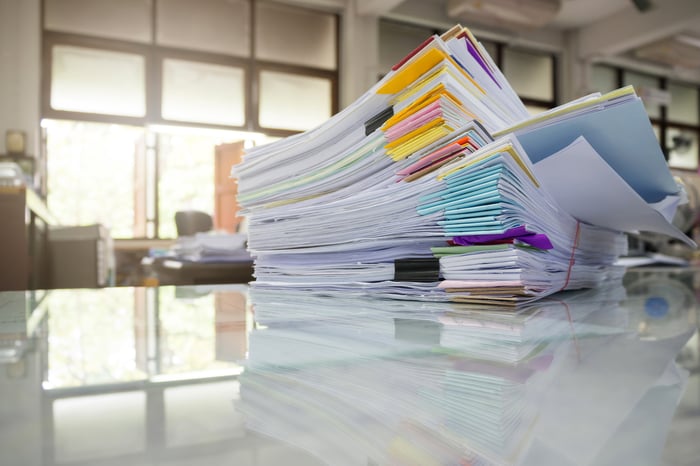 Office Depot's results weren't any better. Its sales fell 6%, with adjusted earnings falling 4%. It shuttered 123 stores, also sold its European business, agreed to divest its operations in Australia and New Zealand, and recently sold its South Korean business. Both companies had their CEOs quit, and both anticipate 2017 being little better than last year.

Yet Office Depot should take heart from its rival's deal to go private. Sycamore Partners reportedly plans to divide Staples into three separate entities -- U.S. retail, Canadian retail, and the business-to-business (B2B) operation -- because bond and loan investors, who are crucial to helping the firm complete the leveraged buyout, aren't keen about the retail businesses; they're only interested in the corporate contract piece.

That suggests Staples may see its retail footprint sold off, or markedly decreased, as it focuses on its B2B business, which is mostly done online and via telephone. Already Staples has begun rethinking its stores, shrinking actual retail space, and dividing up the floor plan to create conference rooms and "co-working" spaces. Called Workbar, the program is a reimagining of the retail layout, similar to how Sears Holdings is trying to reduce its footprint by leasing out space in its stores to other retailers. 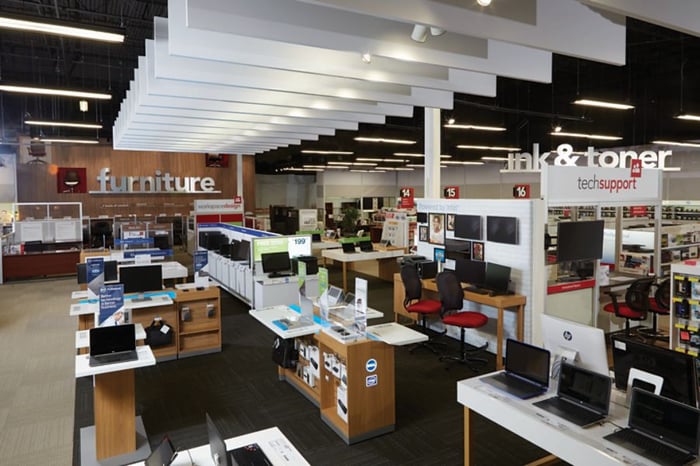 As Staples focuses less on retail, it could very well give Office Depot a chance to gain more business for itself. While also reducing the expansive sprawl of its stores, Office Depot is focusing on smaller-format stores of around 15,000 square feet (currently they're around 20,000 sq. ft.), and is converting a number of existing stores to this smaller size. In 2016, 25 stores were downsized, and the chain plans to have as many as 100 stores changed to this format this year.

Office Depot's "store of the future," which features more areas to try out products and more tech support like that found at electronics retailers, will also focus more on services.

There's talk that Amazon.com might want to buy Office Depot. While this is a rumor that has surfaced before, especially immediately after the failed merger attempt with Staples, there could be new interest, especially since Amazon bought Whole Foods Market. Analysts think such a deal would face tough scrutiny from the FTC, but has the marketplace changed so much in a year that Amazon Business would now be seen as a competitive threat?

It was because the government blocked Staples' attempt to buy Office Depot 20 years ago that the retailers were in such a weakened state they sought to do it again. The FTC failed to adequately predict how the market would change, and repeated its mistake again last year. There may still be a chance for Office Depot to find a silver lining in going through the paper shredder, and Staples' going private may be what allows it to do so.