Netflix, Inc.'s (NASDAQ:NFLX) has transitioned from a DVD-by-mail supplier of video entertainment to the leader of the internet TV movement. This makes one wonder what type of culture could allow a company to succeed under such diverse employee skillset requirements. Let's face it: Mailing DVDs to people is quite a bit different from developing the technical capability to simultaneously launch The Crown in 170 different countries.

Netflix's culture all starts with founder Reed Hastings' experience at his first start-up, Pure Software, a company that he eventually sold, using the proceeds to help launch Netflix.

On a recent Masters of Scale podcast with Reid Hoffman, Hastings said that employees at Pure Software were too focused on process as opposed to first-principle thinking, which would later become a key ingredient in Netflix's culture. 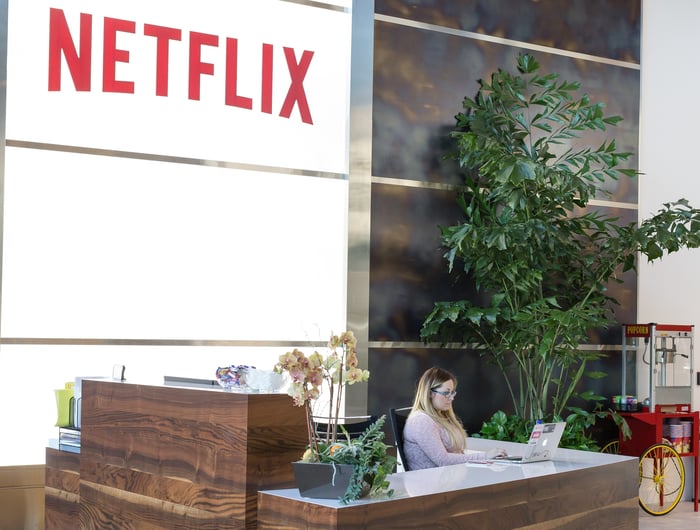 What is first-principle thinking and why is it important?

First-principle thinking means that each employee asks what is best for the company when making a decision, as opposed to following a written process or policy. As an example, Netflix does not have a vacation policy; it lets employees decide when they should take time off, reasoning that they should have a feeling of personal ownership within the company.

Why is first-principle thinking is so important to a company like Netflix? It helped create a culture that could drive the decision-making required to transition from a service based on mailing DVDs to one based on streaming internet television. Netflix needed flexible problem solvers who could guide it through the change.

To underline this, Netflix also offers its employees a unique opportunity. They can choose to take as much of their compensation as they would like in the form of Netflix stock options -- up to 100%, if they so choose.

Netflix's culture is more like a team than a family

Another major distinction of Netflix's culture is that Reed Hastings describes it as a championship sports team rather than a family. A sports team operates by rewarding players for performance, as opposed to the unconditional acceptance that can come from family members. Hastings wants employees to recognize that just as the needs of a team may change over time, an employee's skill set may no longer fit the task at hand, so employment at Netflix is not unconditional. Change occurs when needed.

Employees are encouraged to perform what is known as the "keeper test" with their managers: "If I told you I was leaving, what would you say, if anything, to try and keep me at Netflix?" This helps them know where they stand at any point in time.

Netflix is secretive about a lot of things. Just try and pry out of management how many subscribers watched the latest Adam Sandler movie -- you won't get an answer.

But when it comes to culture, Netflix openly shares information about how it operates. The company encourages prospective applicants to read through the 125-page slide deck it has created about the Netflix culture.

What is unique and special about Netflix is how much we:

Netflix is not for everyone

Many people are attracted to the culture at Netflix -- and just as many are not. Netflix has been criticized as a tough place to work: Only about 65% of employees would refer a friend, according to Glassdoor, a website that aggregates employee inputs about companies. Many employees fear the day will come when they are no longer needed by the company. Just as that aging sports star who loses a step may get cut from the team, so too might an employee who finds the company has moved to requirements that are beyond his or her range of skills.

Netflix's performance speaks for itself

It is hard to argue with success. Netflix's subscriber count of 100 million and its ability to launch its service around the world are two key indicators that the company's culture is all about winning. It is also tough to argue with the recent performance of the stock, which is up about 50% in the past year. It certainly looks as if Netflix has assembled a championship team, and has a group of employees who are ready to tackle whatever challenges the market throws the company's way.

What It's Like to Work at Netflix: A Look at Netflix’s Culture @themotleyfool #stocks $NFLX Next Article
Current