Please ensure Javascript is enabled for purposes of website accessibility
Log In Help Join The Motley Fool
Free Article Join Over 1 Million Premium Members And Get More In-Depth Stock Guidance and Research
By George Budwell - Jul 12, 2017 at 8:00AM

According to S&P Global Market Intelligence, shares of the clinical-stage biotech Novavax (NVAX 2.80%) rose by 10.58% last month. The vaccine maker's shares got a nice lift from reports that President Trump's forthcoming executive order on prescription drug prices won't contain any language regarding hard caps, as well as the publication of the company's second mid-stage trial for its respiratory syncytial virus (RSV) vaccine candidate in women of childbearing age in the journal Vaccine. 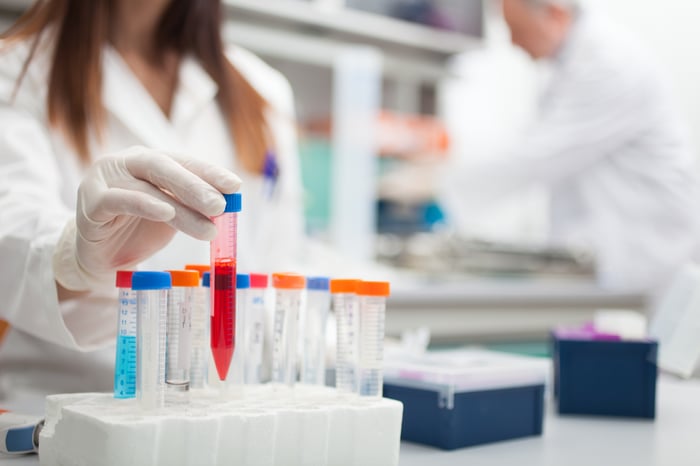 Although the top-line results from this mid-stage study were originally released way back in April 2014 and the company won't immediately benefit from President Trump's more pharma-friendly stance because it doesn't have any products on the market, investors have apparently been looking for any reason to believe that Novavax can mount a comeback following its late-stage flop in elderly RSV patients last year. An effective RSV vaccine that could be used in highly susceptible populations such as infants or the elderly, after all, should easily generate billions in sales in short order.

While Novavax has a respectable cash position for a company of its size and developmental state, the company is still a solid two-and-a-half years away from releasing top-line results for its ongoing maternal immunization study. Put simply, the company is probably going to have to tap the public markets one or two more times before the possibility of a regulatory filing even comes into play. And that's not great news for a small-cap biotech with a share price that barely meets the Nasdaq's minimum share price requirements. This speculative biotech stock is therefore probably only suited for investors with a healthy appetite for risk.