Loan growth is slowing in the United States, which could impede economic growth.

While the economy seems to be headed in the right direction, the chairwoman of the Federal Reserve is worried that uncertainty surrounding domestic and global issues could impede its progress.

In testimony this week before the House Financial Services Committee, Federal Reserve Chairwoman Janet Yellen sounded a generally optimistic tone about the economy, while at the same time musing about the uncertainty of its direction:

Considerable uncertainty always attends the economic outlook. There is, for example, uncertainty about when -- and how much -- inflation will respond to tightening resource utilization. Possible changes in fiscal and other government policies here in the United States represent another source of uncertainty. In addition, although the prospects for the global economy appear to have improved somewhat this year, a number of our trading partners continue to confront economic challenges. At present, I see roughly equal odds that the U.S. economy's performance will be somewhat stronger or somewhat less strong than we currently project.

As Yellen points out, there's always uncertainty in the markets. What seems to have her concerned now, though, is both the degree of uncertainty, as well as the impact it may have on the economy. 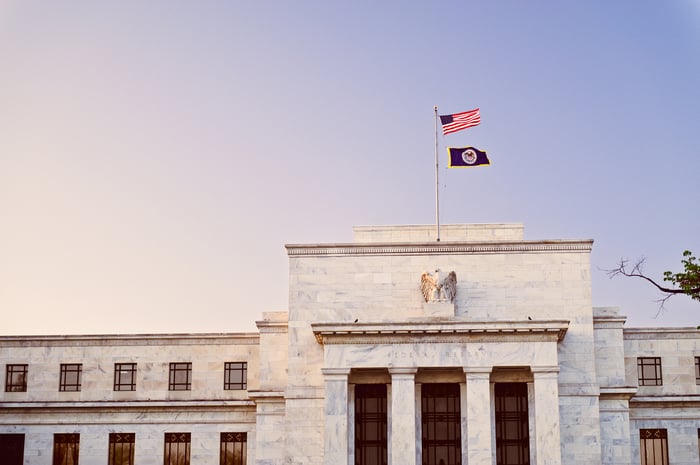 No metric demonstrates this better than the growth rate of commercial and industrial loans, or C&I loans. These are bread-and-butter loans to businesses, providing funds to start and expand. It's worth distinguishing them from commercial real estate loans, which finance the purchase and/or development of commercial property.

The outstanding balance of domestic C&I loans has dropped considerably over the past few months, as you can see in the chart below. After expanding at an average rate of 10.6% from the beginning of 2012 through the end of 2016, the rate dropped in May to 2%, according to data from the Federal Reserve. It's impossible to say if the recent downturn in demand for C&I loans is temporary or instead early evidence that the economy is decelerating. But it's not a good sign either way, and it's something that investors, especially those in bank stocks, will want to watch closely.

You can see these trends reflected in the way the nation's largest banks report their loan growth figures. In the first quarter, Bank of America (BAC -0.80%) said that average loan balances in its operating segments rose $44 billion, or 6%, to $819 billion. But interestingly, if you factor in the loan portfolios in Bank of America's non-operating units, the size of its aggregate loan portfolio actually declined slightly between the end of last year and the end of the first quarter, dropping $441 million.

Consequently, while the non-GAAP, top-line numbers at these banks paint an optimistic picture, the reality is that credit expansion has slowed considerably over the past few months. Because loans are the principal product that banks sell, this is something investors in banks like Bank of America, JPMorgan Chase, and others will want to watch closely.