The retail market has been a brutal one over the past year, due to soft brick-and-mortar traffic, an over-retailed U.S. market, and tough competition from e-commerce competitors. I recently identified three decent dividend plays in that tough sector, but today I'll highlight three landmines which I never plan to buy -- Michael Kors (NYSE:CPRI), Abercrombie & Fitch (NYSE:ANF), and Under Armour (NYSE:UAA) (NYSE:UA).

Shares of Michael Kors have fallen more than 20% this year due to three straight quarters of annual revenue declines. Those declines are attributed to tough competition from affordable luxury market rivals like Coach (which recently agreed to buy Kate Spade); overexposure to the wholesale channel, which cheapens its brand appeal; and an overextended brick-and-mortar footprint, which resulted in a double-digit comps decline last quarter.

Analysts expect Kors' revenue and earnings to respectively fall 7% and 16% this year. Meanwhile, CEO John Idol is having the company merely tread water by spending over 100% of its free cash flow on buybacks over the past 12 months. That's a bizarre move, since it could have used that cash to challenge Coach's bid for Kate, acquire smaller brands, or hire new designers to bring in fresh looks.

Idol is also taking the predictable route of shuttering 100-125 locations within the next two years to cut costs. But that move could merely reduce Kors' brand visibility as its popularity fades. Kors looks cheap at 11 times earnings, which is much lower than the industry average of 25 for apparel manufacturers, but I think this out-of-style fashion house is a falling knife.

Abercrombie & Fitch is also down about 20% this year as declining mall traffic, the growth of fast fashion retailers like H&M, competition from e-commerce players, and the bankruptcies of rivals flooding the market with cheap apparel all crushed its growth. Interest in its "big logo" designs plunged among younger shoppers, while former CEO Mike Jeffries' PR gaffes about A&F being an "exclusionary" brand for "cool kids" are still commonly associated with the brand.

Jeffries abruptly resigned in late 2014, but the company only hired a permanent CEO a few months ago. Since then, Abercrombie has attempted to reinvent its image for older shoppers, which Wunderlich Securities analyst Eric Beder lamented made "little sense" last year. That turnaround effort isn't paying off -- Abercrombie's revenue fell annually for the 17th straight quarter in May. Analysts expect its revenue to fall 2% this year, and for its earnings to remain deep in the red.

There was a brief glimmer of hope in May when reports indicated that A&F might sell itself. But those hopes were recently dashed when the company announced that it had ended all takeover talks. A&F looks cheap at 0.2 times sales, but it could still head lower if it doesn't present a viable turnaround plan.

Under Armour was once called the "next Nike (NYSE:NKE)," but the stock has dropped about 30% this year -- due to slowing sales growth, contracting margins, poorly received designs, and questionable management decisions. UA experienced a major slowdown in North America, where it generates most of its revenue, partly due to the resurgence of Adidas (OTC:ADDYY). 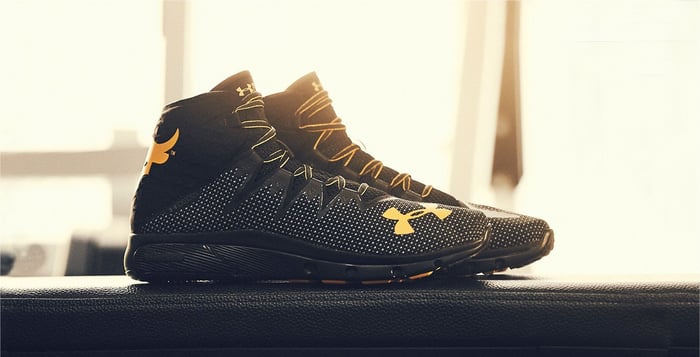 That market was also hit hard by the bankruptcy of Sports Authority, which flooded the market with excess inventory. Meanwhile, UA increased its dependence on lower-margin footwear instead of higher-margin apparel, then partly missed the "athleisure" market shift led by Lululemon, Nike, Adidas, and other companies. In the footwear market, sales of UA's flagship Curry shoes fell, but it spent more cash on ads and endorsements to counter Nike and Adidas.

UA's revenue is expected to rise just 11% to $5.4 billion this year, compared to 22% growth last year. Meanwhile, CEO Kevin Plank still hasn't abandoned his goal to generate $7.5 billion in revenues by 2018 -- which would require nearly 40% sales growth during the year. On the bottom line, analysts expect UA's earnings to fall 4% this year. But despite all those challenges, UA still trades at a whopping 52 times earnings -- which is more than double the industry average of 25 for apparel makers.

The retail sector is rapidly changing, and weaker companies which can't keep up with the trends will be left behind. Kors is hobbled by meek management decisions, A&F is directionless, and Under Armour is being outgunned by Adidas and Nike. Unless these companies change their ways, investors should stay very far away.

Editor's note: This article  has been corrected to reflect that Abercrombie & Fitch hired a new CEO in February.