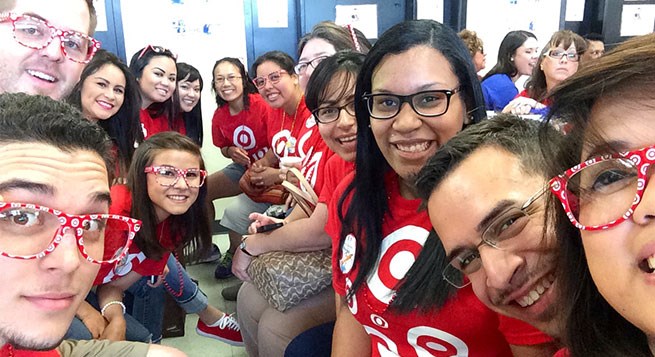 Target said it expected a modest increase in second-quarter comparable sales and for earnings per share to come in higher than the company's previous guidance of $0.95-$1.15. The same-store sales increase would mark Target's first in five quarters, and comes as the company has recommitted to lower prices to win back market share in much the way Wal-Mart said it would do two years ago.

CEO Brian Cornell cited "broad-based improvement in traffic," and said the launch of baby brand Cloud Island in May was a success. Target plans to launch four new exclusive brands in Home and Apparel over the next few months, and Cornell also said the initial results from Target Restock, its next-day delivery program, were promising.

The retail sector is desperate for any piece of good news, so it's not surprising that Target's update led to a rally among its peers. The SPDR S&P 500 Retail ETF (NYSEMKT:XRT) has fallen 9.4% this year compared to a 9.3% gain for the S&P 500, as the industry has announced a massive store closure amid pressure from e-commerce competition, which has led to traffic declines, especially in malls. The retail industry is on track for more than 8,000 store closings this year -- a record.

Just earlier this week, Macy's, Gap, and Kohl's all fell sharply as Abercrombie & Fitch (NYSE:ANF) said it would no longer seek a sale after saying it would explore that option back in May. The news was interpreted as evidence of little interest among private equity or other retailers in a buyout. While Abercrombie said it fielded offers, they were likely too low.

Target isn't an exact peer for Gap, Macy's, Kohl's, or Urban Outfitters. The big-box chain sells a range of products in categories such as food, apparel, home, and others in a number of private brands with a "cheap chic" vibe that makes it unique. But like the other retailers that surged today, Target shares have been beaten down, falling 26% over the last year. 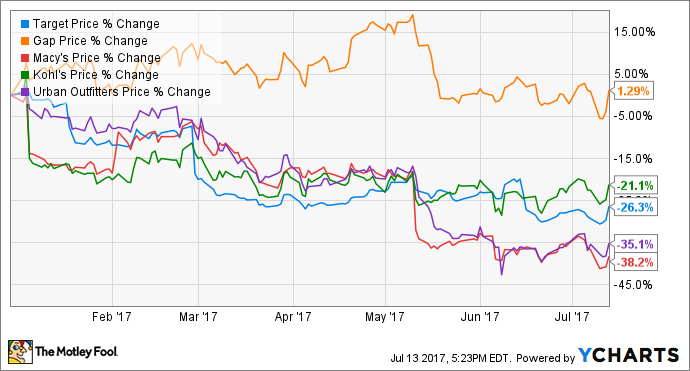 As you can see, all of the stocks, with the exception of the Gap, have dropped sharply over the last year.

Part of the reason why retail stocks rallied is because their valuations have gotten so cheap. The chart below shows their earnings valuations.

At a time when the broader market has surged and the S&P 500's P/E ratio is 25.9, the retail sector would offer significant value if companies could demonstrate positive sales and profit growth as Target's guidance seems to imply.

However, Target's improving prospects don't necessarily translate into good news for its peers as it does nothing to change the long-term outlook for the sector. It could even be a sign that the company is taking share from peers like Macy's. I wouldn't change my investing thesis on these stocks based on today's news alone.