To buy the best dividend stocks in airlines, consider spreading your risk between different airline types. The three best airline dividend stocks for investors also happen to belong to three different categories in the airline industry.

Obtain an interest in a legacy carrier via Delta Airlines (NYSE:DAL). Invest in growth by purchasing major regional carrier Alaska Air Group (NYSE:ALK). And put some skin in the low-cost carrier (LCC) game with shares of Southwest Airlines (NYSE:LUV). Below, let's take a few moments to sum up the advantages and dividend prospects of each company, in turn. 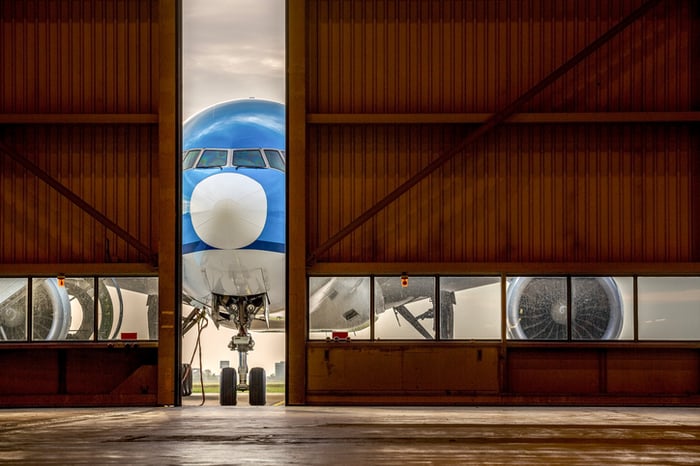 Dominating revenue tallies in such a fiercely competitive industry has kept Delta sharp in its quest for expansion opportunities. Recently, the company pressed deeper into the burgeoning Latin American market via a joint cooperation agreement with Aeromexico parent Grupo Aeroméxico, S.A.B. de C.V., which was finalized in March 2017. The deal allows the two companies greater flexibility in trans-border routes and adds new destinations for both carriers. Delta picked up a 49% stake in Grupo Aeroméxico as part of the joint-venture transaction.

Investors in Delta have benefited greatly from management's focus on shareholder returns. Since resuming its dividend in 2013 -- just three years out of bankruptcy reorganization -- the airline has more than tripled its dividend. Its $0.203 quarterly payout equates to an annualized yield at its current share price of 1.5%. The company's extremely low payout ratio of 13.7% leaves it space to fatten its quarterly checks to shareholders in the coming years.

Of course, to continue to grow the dividend as aggressively as it has in the near past, Delta will have to protect its ability to generate substantial cash flow. Recent proactive initiatives with both short and long time horizons indicate that management grasps this reality.

Delta has cautiously trimmed capacity expansion this year to a 1% increase. It's also pursuing a fleet-modernization program that will spruce up its rather aged fleet -- which carries an average plane age of 17.2 years -- reducing maintenance costs, and ultimately, improving margins. Finally, the company issued $2.0 billion of unsecured debt in its most recent quarter, the proceeds of which were used to reduce unfunded pension commitments.

Such actions, supported by the organization's investment-grade balance sheet, point to a relatively safe dividend that's likely to improve considerably over time.

Alaska Air Group didn't wait long after completing its acquisition of Virgin America in 2016 to exploit the deal's route-expansion potential. In March 2017, the company made the single biggest new-markets announcement in its history, adding 125 daily nonstop flights from 13 new routes originating out of San Francisco International Airport and Mineta San Jose International Airport.

Just as it celebrated the first fruits of the merger, however, the company experienced a difficult first quarter of 2017, as fuel costs more than doubled versus the prior year. Higher fuel was one of the primary factors that dragged quarterly net income down 46%.

Still, Alaska is one of the most consistently profitable operating concerns in the industry. Further, the organization's profits, dollar for dollar, typically exceed those of most of its close competitors. Even with the Q1 2017 fuel drag, the carrier has generated an operating margin of 19.4% over the last trailing 12 months, a considerably high margin for an airline.

The company's dividend is roughly in line with Delta's on a yield basis: A current quarterly payout of $0.30 yields 1.3%. The carrier has increased its dividend by 50% in the four years since the first dividend was issued in August 2013. "ALK's" payout ratio, again, like Delta's, is quite low, at 19.1%.

While Alaska leveraged its balance sheet to acquire Virgin last year, more than quadrupling its long-term debt to nearly $3.0 billion, the company's management has shown an historical aversion to allowing debt to remain on its books. Thus, shareholders can expect steady, but moderated, increases to the dividend as the company utilizes some of its free cash flow to whittle down long-term balance-sheet obligations.

Southwest Airlines: A middling yield that will eventually rise

In January of last year, my Foolish colleague Dan Caplinger noted that investors expected Southwest Airlines to push up its dividend, then yielding 0.7%, in order to keep pace with the likes of dividend-crowd favorite Delta Airlines. Since Dan's analysis, the company has hiked its payout by more than 80%, to $0.125 per share each quarter.

But Southwest's dividend hasn't begun to catch up to Delta's yield of 1.5%. Today, the carrier's dividend only yields 0.8%. The reason, of course, is the 50% stock price appreciation the "LUV" ticker has seen since January 2016 -- a good problem for shareholders to have.

One of the oldest of domestic carriers, Southwest is focused on its next phase of growth. The company added international routes for the first time in its history in 2014. Over the last three years, and including the addition of three new routes this Fall, Southwest has built up 17 destinations focused on Central America, Mexico, and the Caribbean.

A pioneer in the LCC category, Southwest is seeking to keep its cost structure competitive through fleet modernization. It's nearly finished with a phase-out of its "Classic" planes, the Boeing 737 300/400/500 series, which will be fully retired by the end of September. Southwest will begin to take delivery of the fuel-efficient Boeing 737 Max 8 series this fall.

Like Alaska and Delta, Southwest has faced higher fuel prices this year, which are beginning to eat into earnings. Still, the carrier reported record revenue of $4.9 billion in the first quarter of 2017 and produced a respectable operating margin of 13.5%, for operating income of $658 million.

Of particular interest to income investors, Southwest enjoyed record free cash flow of $1.2 billion in its most recent quarter. And of the three companies discussed in this article, Southwest boasts the lowest payout ratio, at just 12%. These two facts in conjunction demonstrate the ease with which the company could continue to implement payout hikes.

Finally, Southwest holds a decades-long dividend payment streak, having recently paid out its 163rd consecutive quarterly dividend check. With its lengthy history of both profitability and dividend continuity, Southwest should be a core holding in any dividend-oriented airline portfolio.