Please ensure Javascript is enabled for purposes of website accessibility
Log In Help Join The Motley Fool
Free Article Join Over 1 Million Premium Members And Get More In-Depth Stock Guidance and Research
By Dan Caplinger - Jan 18, 2016 at 7:10AM

The airline has done very well, and some hope it will reward shareholders.

The airline industry has bounced back from decades of trouble, and even airlines that have had to declare bankruptcy multiple times in the past are now bringing in big profits. For Southwest Airlines (LUV -1.89%), profits are nothing new, and the company has managed to find ways to keep earning money even when times were tough. Even though rivals like Delta Air Lines (DAL -1.60%) have used tactics like imposing new baggage fees and other incremental charges to boost their bottom line, Southwest has avoided many of the tactics that its competitors are using. However, Delta now pays a higher dividend yield than Southwest, and income investors would like to see the longtime discount airline catch up. Let's look more closely at Southwest Airlines to see how likely it is that the airline will give investors a dividend boost in 2016.

Paying dividends in a cash-poor industry
Southwest has a four-year streak of rising dividends, which might not sound like much at first glance. When you look at how rare it was for airlines to pay any dividends at all, however, Southwest's track record looks much better. Delta, for instance, has only paid a dividend since 2013, and the airline only emerged from its most recent bankruptcy in 2007. American Airlines (AAL -2.66%) has paid a dividend only since mid-2014, and United Continental still doesn't have a regular payout at all.

Southwest's dividend history goes all the way back to 1980, but it's only in the past several years that the company has really committed to trying to raise its payout substantially. Since early 2012, Southwest has increased its quarterly dividend to 15 times what it paid for more than a decade previously. 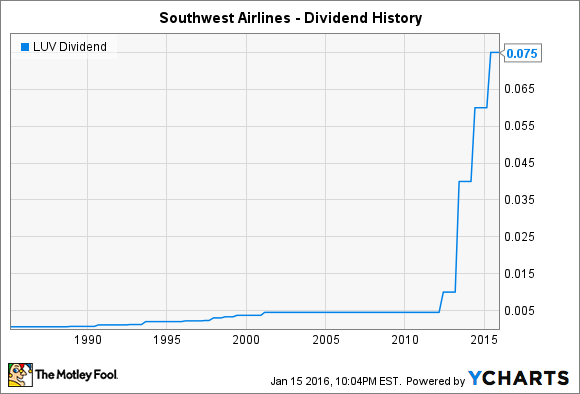 There are several reasons for the recent acceleration in Southwest's dividend growth. First, consolidation in the industry has helped Southwest boost its profitability. With American having merged with US Airways, Delta with Northwest, and United with Continental, Southwest hasn't had to worry about as many players sabotaging industrywide fare increases. Falling industrywide capacity has also helped support Southwest's pricing power.

In addition, the plunge in fuel costs has benefited Southwest. The airline hasn't reaped all of the gains from falling energy prices because it had hedged its needs for future years before the drop. Nevertheless, Southwest isn't fully hedged, and its earnings have risen dramatically over the past year because of the favorable environment.

Will Southwest keep its dividends moving up?
What shareholders have to understand is that Southwest Airlines has plenty of demands on its capital. The company has recently expanded its route map to serve numerous destinations in Mexico, Central America, and the Caribbean, and it has spent money to expand domestic hubs that provide international services to handle increased demand. Southwest has also traditionally used stock buybacks to supplement its dividend payments.

Southwest only pays out about 10% of its earnings in the form of dividends, and so it would take a major change in the airline's internal dividend-payment policies to result in a marked boost in its payouts going forward. Nevertheless, Southwest has established a streak of dividend increases that it usually makes every spring. Investors can expect at least a token increase in 2016, but expecting Southwest's yield to climb well above that of Delta or other airline companies will likely be futile.

Dan Caplinger has no position in any stocks mentioned. The Motley Fool has the following options: long January 2017 $35 calls on American Airlines Group. Try any of our Foolish newsletter services free for 30 days. We Fools may not all hold the same opinions, but we all believe that considering a diverse range of insights makes us better investors. The Motley Fool has a disclosure policy.