High growth stocks can be hard to find, but these three fit the bill for investors looking for big wins on the market.

Activision Blizzard (ATVI -0.49%) has been a huge winner for investors over the last three years, and going back 15 years it's been one of the best stocks on the market. Investors looking for that kind of potential have to take risks, but the rewards can be enormous.

As we scoured the market for high potential stocks, a few popped out. Spirit Airlines Incorporated (SAVE 0.37%), SunPower Corporation (SPWR -3.17%), and GoPro Inc (GPRO -0.59%) have Activision Blizzard-like potential, and with a little luck they could help make you rich long-term.

Brian Feroldi (Spirit Airlines): While I've never been a fan of airline stocks in general, I have to admit that the bull case for owning Spirit Airlines over the long haul is quite appealing. Spirit succeeds by offering low ticket prices that simply cannot be matched by others. The company can do so because it operates the youngest fleet of planes in the country (which keeps maintenance costs low), and it forgoes all of the "extras", charging a fee for all of the things offered by competitors. Want to print your boarding pass at the airport? A soda on the plane? To carry on a bag? Spirit charges its customers for all of these things, which are offered for free elsewhere. In essence, consumers get nickeled and dimed on their trip -- but in return, they get a dirt cheap ticket.

This business model might sound cruel, but the company's ability to offer rock-bottom fares has kept its customers coming back for more. What's more, all those small fees add up, which has allowed the company to generate a consistent profit. 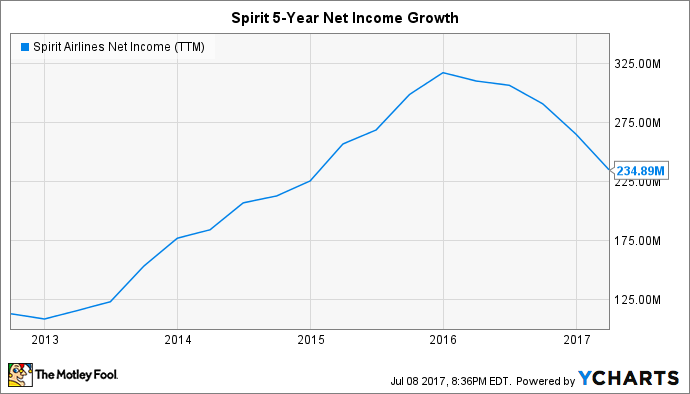 Looking ahead, Spirit's growth plan calls for it to simply add new routes to its network. The company has already identified more than 500 routes that it believes it can serve, which represent years of untapped growth. That gives it ample opportunity to keep its top- and bottom-lines soaring for years.

In spite of its differentiated business model and long-term potential, Spirit's stock is currently trading around 10 times next year's earnings estimates. I'd argue that's an attractive price for a business that is built for growth.

A similar back story with very different implications

Jason Hall (SunPower Corporation): I can remember a few years back when Activision Blizzard's stock struggled to gain momentum, in large part because of the shadow cast by its (at the time) majority shareholder, French media conglomerate Vivendi. Vivendi was rather cash-strapped at the time, and many were afraid it would raid Activision's coffers to make its own ends meet, hindering Activision Blizzard's ability to compete in an increasingly competitive environment. Luckily, CEO Bobby Kotick led an investor group that was able to break the company free from Vivendi, and investors have done incredibly well since.

SunPower is in a similar position. It is majority-owned by a French company, in this case the energy giant Total S.A., and also operates in an ultra-competitive industry. But that's where the similarities end.

While Vivendi used Activision as a cash-cow, Total is very strong financially, and actually provides financial backing for SunPower, something that's incredibly important in the current cyclical slow period in solar. The upshot for Total is that this has helped the company expand into renewables, which will help drive the oil and gas giant's business in the future once fossil fuel use declines.

And despite the cyclical weakness in solar, which has seen SunPower's stock fall 39% over the past year, the long-term potential remains very bright. Global solar installations are set to increase for decades to come, and SunPower is likely to remain a technology leader in the space. With Total's backing, the returns could be Activision Blizzard-like for investors patient enough to ride out the industry's cycles.

Travis Hoium (GoPro): As hot as Activision Blizzard is today, it's hard to remember that as recently as 2014 the company was at a bit of a crossroads. Revenue and net income dropped versus 2013 and no one quite knew what to make of the business. Would console games survive? Would people really pay to play computer games? What about mobile? There were more questions than answers. 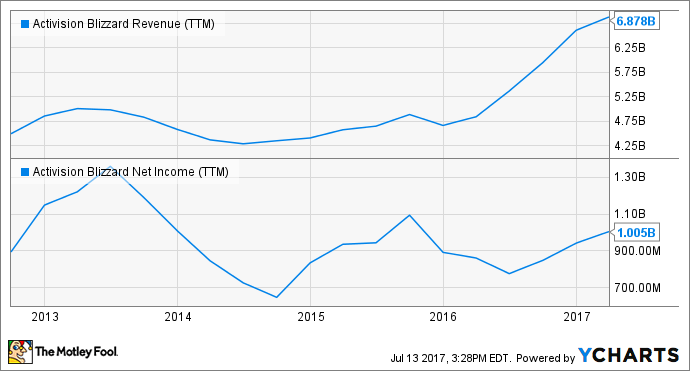 I think GoPro is going through a similar transition and will come out stronger a few years from now. The Hero line of cameras that made GoPro a household name have stopped growing and the Karma drone was kind of a flop, but long-term the business has a lot of potential if markets play out right, as they did for Activision Blizzard.

The Fusion 360 camera has a lot of potential and could become a de facto standard in the industry, as Hero cameras are. And with the potential to provide content for everything from photos to immersive VR video, the application possibilities are incredible.

Live video is also a perfect technology for GoPro if the company can add 4G or (gasp) 5G connectivity. It's tough to mount your phone on your head to capture a sick trick on a mountain, but a GoPro is perfect for live extreme sports.

And let's not forget about drones. Karma hasn't been impressive compared to DJI's drones, but GoPro is one of only a few companies to get a low cost drone in the air and flying. If GoPro can give Karma features that make it competitive with DJI drones -- collision avoidance and smart controls, for starters -- it could have another hit on its hands. Karma may not be what drives GoPro's business, but contributing to the bottom line may be good enough.

Like Activision Blizzard, GoPro has a shot to be a big turnaround story in the next three years. And if it can get its products and strategy right, the market may be moving in a direction that puts a lot of value on growth markets like 360 video and drones, where GoPro should have an advantage over competitors.