Honeywell International's (NASDAQ:HON) second quarter is shaping up to be a very interesting one for investors. In short, the company faces a mix of earnings headwinds and tailwinds, and it's hard to predict whether the net result will be a raising of the company's full-year guidance. Let's take a look at three key things to look out for when CEO Darius Adamczyk discusses current trading and outlook.

After a first quarter in which, according to Adamczyk, Honeywell "met or in most cases exceeded" management's guidance ranges across its segments, it was somewhat puzzling that the full-year guidance range was only raised by $0.05 at the bottom end, to between $6.90 and $7.10.

One of the reasons for such conservatism was management's caution regarding its short-cycle business, which is 60% of its total revenue, and typically exposed to current business sentiment. However, as you can see below, business-cycle indicators remain in growth mode, and there is no reason to expect weakness in the short-cycle business within the home and building technologies, safety and productivity solutions, and performance materials and technologies segments. 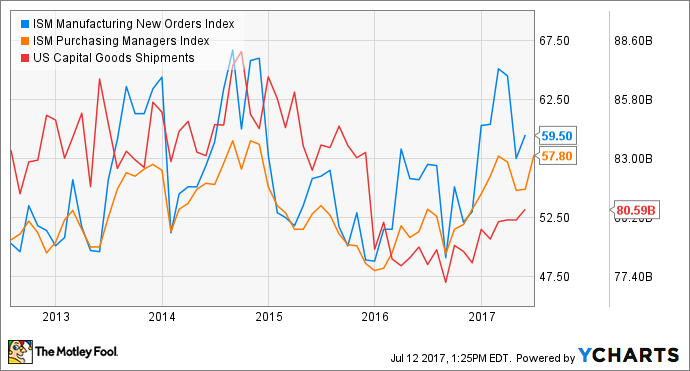 In a nutshell, Dave Gitlin, president of United Technologies's aerospace systems segment, claimed his company continues to face sales headwinds with wide-body jets, business jets, regional jets, and helicopters. It's a message echoed by Honeywell's CFO Tom Szlosek at an investor conference in June, and it wouldn't be surprising to see Honeywell report continued weakness in these areas.

It matters because Honeywell has significant exposure to business and general aviation. The aerospace segment contributed nearly 38% of total company sales in 2016, with commercial aerospace (original equipment and aftermarket) contributing around half of aerospace sales. In turn, business jets (original equipment and aftermarket) contribute around a third of commercial aerospace -- or around 6.5% of total company sales.

Simply put, Honeywell could do with some signs of improvement in business and regional jet build rates; management's commentary is worth looking out for.

Honeywell has faced significant earnings headwinds in the last year or so, due to original-equipment aerospace incentives granted to win out on new aircraft platforms. While they are necessary to insure long-term recurring revenue from positioning on the new aircraft, they have significantly held back profitability in the segment.

On the last earnings call, Szlosek argued the incentives would prove a $25 million headwind in the first half, but would turn into a $70 million tailwind in the second half -- the second half of 2016 was incentive-heavy for Honeywell. It's worth keeping an eye on whether these numbers are confirmed in the results presentations.

It's especially important because Honeywell's aerospace incentives were more than expected in 2016, and part of the reason why the company missed its original revenue guidance that year.

All told, it's hard to know what the net impact will be. There are reasons to believe management is being conservative with its short-cycle businesses (within its non-aerospace segments), but the company could face continued headwinds in aerospace. If aerospace disappoints, then management could face renewed pressure from activist investors to spin off the segment.

As ever, the market will focus on the near-term impact on full-year earnings guidance, and investors will be hoping for a positive surprise from Adamczyk in July.