Corporations have benefited tremendously from the lowered input costs and increased market size that have resulted from the trend toward global integration of capital and labor. Two companies that have particularly reaped the benefits of globalization are outsourcing firms Cognizant Technology Solutions (NASDAQ:CTSH) and Infosys LTD (NYSE:INFY). Both companies provide IT consulting and outsourcing services and the similarities between them in terms of size, revenue, and profitability are glaring.

Over the past 10 years, Cognizant has increased its revenue 678%. Infosys hasn't enjoyed the same success, but has still managed to grow sales 200% over the same period. However, the companies face some risks. Immigration restrictions, especially in the United States, could do considerable harm to the financial position of both companies. A downturn in the financial health of the businesses they serve would hurt the companies. And stock price should be a concern for investors as premium valuations could get whacked quickly if either of the businesses show signs of weakness that are not currently priced in.

Let's take a closer look at how Infosys and Cognizant compare on these three risk factors.

What happens in the U.S. matters

Immigration is a hot topic in the United States and reform leading to restraints on immigrants, along with limits on H-1B visas, which many companies use to bring skilled workers to America, are a real risk for companies like Cognizant and Infosys. As companies look to fill job openings, they typically outsource to Cognizant and Infosys to provide staff from India or other countries.

Since both companies are highly dependent on the United States, any changes that restrict the H-1B program have the potential to crimp revenues. However, Infosys has done a slightly better job of diversifying its regional exposure. Cognizant receives 78% of its revenue from North America while Infosys is dependent on the region for 65% of its revenue. It has also done a better job of diversifying its revenue stream in Europe and the rest of the world.

Interestingly, despite being less exposed to the U.S. and North America, Infosys stock fell more sharply in the week following the U.S. presidential election that saw Donald Trump, who garnered support with an America-first platform, elected. 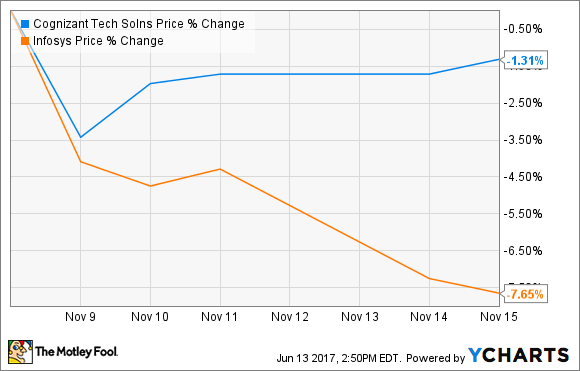 Both stocks recovered from the post-election drop, but Infosys is basically where it was on Nov. 8, 2016, while Cognizant is up over 20% since Election Day. However, its difficult to ascertain that Cognizant's recovery can be tied to less concern about immigration reform as its recent positive run can mostly be attributed to the successful involvement of an activist investor. The risk of legislation restricting skilled immigrants remains and if anti-immigration legislation passes in the U.S., both Cognizant's and Infosys' businesses will be compromised. But Cognizant will likely feel it more than its competitor.

Cognizant and Infosys are exposed to the industries they provide technology services to.

With 40% of its business dependent on financial services, an industry in which success is highly dependent on a strong economy, Cognizant is significantly more exposed to any hit this industry takes than Infosys. It also has more than twice the exposure to healthcare, another industry facing uncertainty in the United States. However, it's difficult to make an argument that Cognizant is in a more vulnerable position than its competitor. Although Infosys' business is more diversified, its industry representation appears riskier as its business is more focused on the struggling manufacturing, retail, and energy industries.

Cognizant stock has had a nice run-up in both the long and short term. With its strong top-line growth, the increase was likely warranted. However, it may have also led to some valuation concerns. Today the company trades at 25 times its trailing-12-month earnings. With the S&P 500 trading at a trailing price-to-earnings ratio of 25, that seems reasonable, but relative to Infosys (P/E of 17), Cognizant is trading at a hefty premium. Looking at both the P/E and the enterprise value-to-EBITDA ratio, the spread between the two companies has increased recently. 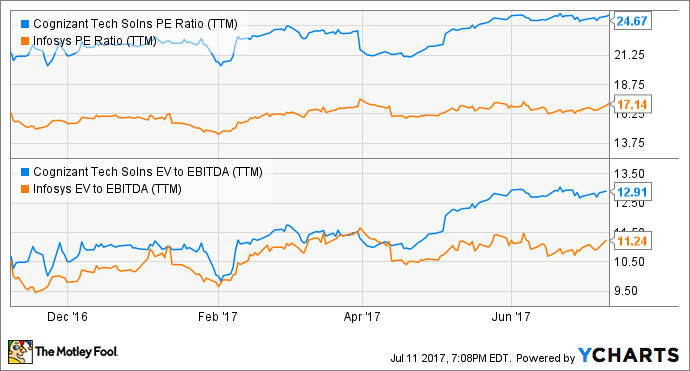 At first glance, Cognizant's premium valuation appears to be warranted as analysts expect its earnings to grow 13% over the next three to five years as opposed to 11% for Infosys.  However, analyst expectations may prove to be aggressive if constraints on immigration and outsourcing are put into play. Cognizant will likely feel it more given its higher exposure to the United States and higher stock valuation. It's also difficult to argue such a divergence in stock price given that Infosys delivers higher operating margins and returns on invested capital while having no debt. Infosys has also proven more shareholder-friendly as it returns a higher portion of its earnings back to shareholders in the form of a dividend.

However, the stock market looks forward and the data above is looking at the past. Investors are optimistic about Cognizant's cooperation with activist investor Elliott Management. In part due to pressures from Elliott, Cognizant is changing its board composition, putting a new focus on accelerating its shift to digital technologies, expanding margin targets, and launching a new capital return program. Time will tell if the company is successful, but a part of the optimism may already be priced into the stock. Therefore, Infosys may still be the less risky stock, especially if Cognizant fails to perform.

Infosys appears to be more diversified when it comes to regional and industry exposure. It is also trading at a discount to Cognizant, despite having better financial performance and being more shareholder-friendly. Given that Cognizant is growing faster than Infosys, it may continue to outperform going forward. However, if you are looking for a stock with less downside risk, Infosys is the way to go.